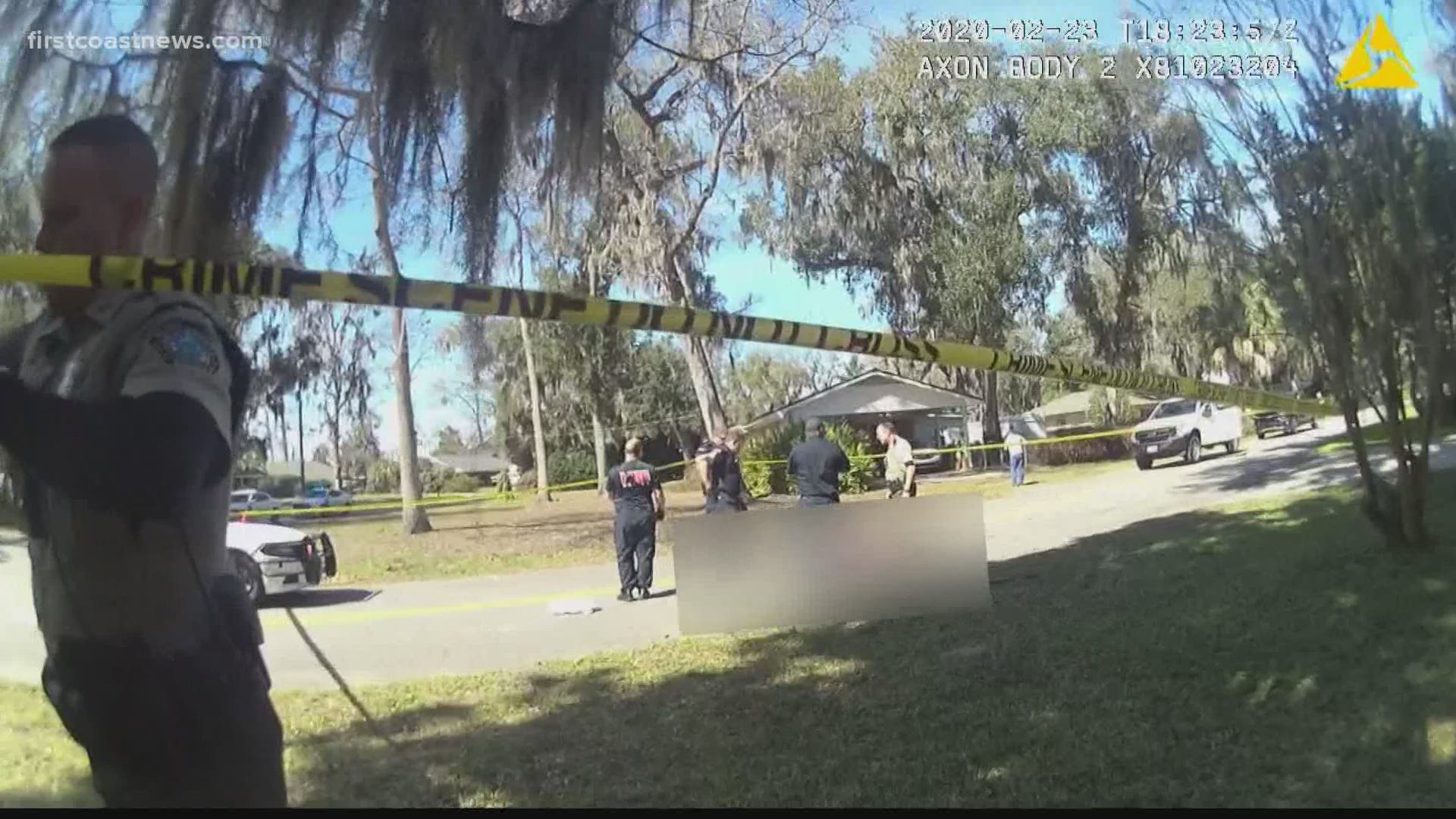 Arbery's death gained national attention after video of his killing was released in May. Officials say he was chased by three white men through the Satilla Shores subdivision in Brunswick before he was shot and killed on Feb. 23. The men say they believed he was burglarizing homes.

The three men charged with his murder, Gregory McMichael, his son, Travis McMichael and neighbor William "Roddie" Bryan Jr., were not arrested until Bryan's recording of the shooting went viral in early May. All three now face charges of felony murder and aggravated assault. They have pleaded not guilty.

In the newly released footage, Gregory McMichael can be seen talking to his son as Travis McMichael paces back and forth.

Surveillance video released after the shooting showed Arbery visited a home under construction on several occasions, as did other neighborhood residents and children, but nothing was stolen or damaged.

"Travis runs, gets his shotgun," Gregory McMichael recalls telling his son. "I grab my .357 magnum, Glynn County PD issued by the way, so we take off."

In his police interview, Bryan says he joined the pursuit and attempted to "corner" Arbery. He has subsequently maintained he was simply a bystander.

“I hollered at them, I said, 'y’all got him?'" Bryan told officers. "They got down to the end somewhere and they must’ve got past him because I pulled out of my driveway and was going to try and block him."

Bryan continued, “Should we have been trying to chase him? I don’t know. I mean, but yeah -- at one time when I cornered him up over here, he was trying to get in my truck.”

Gregory McMichael told police how he believed Bryan got involved.

"Roddie pulls out at some point... pulls up in his truck and kind of blocks [Arbery]... [Arbery] starts running past us and Travis backs up and says, 'hey stop, stop we want to talk to you' or something to that effect. I don't remember the exact words."

"This man stood feet away from where my son lay shot to death and seems to brag about his part," Arbery's mother, Wanda Cooper-Jones, said in a statement about the bodycam footage. "He and all involved must be held accountable to the fullest extent of the law."

"Should we have been following him? I don't know," Bryan said in the footage.

One of the attorneys representing Arbery's family, Ben Crump, said in a statement that the new body camera footage goes against Bryan's initial claim that he had nothing to do with the shooting.

In one of the police body camera footages, the older McMichael, who has blood on his hand when police are speaking to him, says he initially told his son not to shoot before Arbery "comes at him. And they start wrestling. [Arbery] was trying to take the shotgun away" before shots were fired.

Later, he says, "at some point, the guy attacks him and they get into a fight over the shotgun and bam, then a second later, bam, it was a damn blur."

When one of the recording officers first approaches Travis McMichael, he is sitting on a bench, face, hands and arms covered in Arbery’s blood.

As he stands, he says, “If he (Arbery) would have stopped, this wouldn’t have happened.”

Travis McMichael told the officer he’d seen Arbery running and thought he might have robbed someone. Travis McMichael said he and his dad “went out there to stop him, to talk to him and he took off running.”

“I told him ‘stop, stop, stop’ till he hit me. I had nothing to do. There was just nothing else I could do.”

It the first of several times Travis McMichael says Arbery hit him.

The recording officer notes Travis McMichael has a bruise that is starting to swell.

Throughout the conversation, Travis McMichael paces around the yard, hands on his hips. He asks if he can get cleaned up but the answer is no. Investigators need to preserve evidence.

Early in the encounter, the officer apologizes for needing to take pictures of Travis McMichael, saying “we want to do everything right.”

“I want it done right,” Travis McMichael replies. Soon after he says, “This doesn’t look good.”

"With the murderous teamwork of Bryan and the McMichaels exposed for the world to see, we are confident that this will bring us one step closer to justice for the Arbery family," Crump said in a statement.