Police: Man accused of leaving racist signs on yards of two Yulee women said he 'did it out of spite'

One sign said, "Black on Black crime is a beautiful thing." 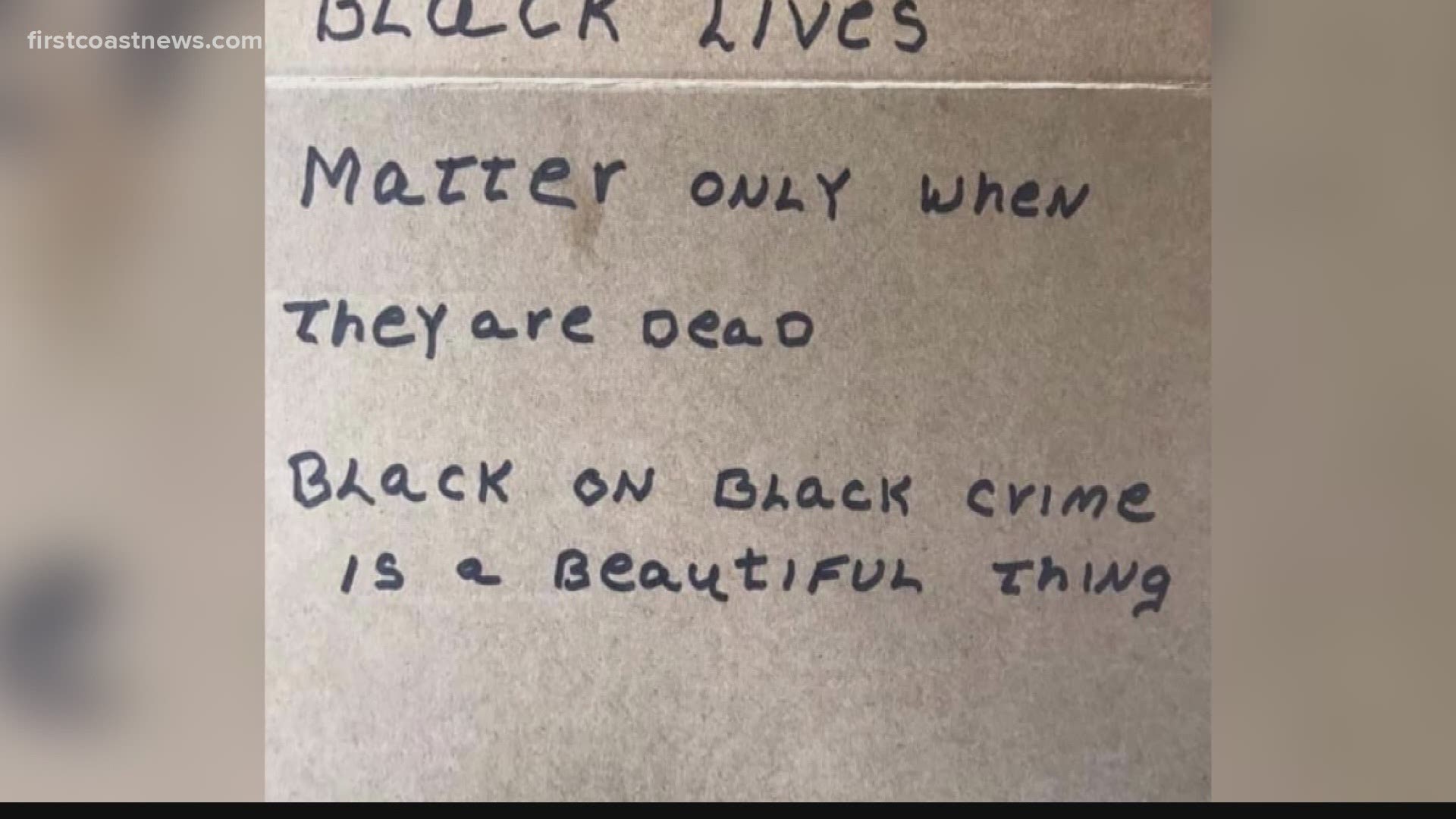 JACKSONVILLE, Fla — A man accused of throwing racist signs onto two Yulee women's yards told police he did it out of spite and apologized, according to a report from the Nassau County Sheriff's Office.

The sheriff's office released the case report of the incident Monday.

It says a woman spotted an unknown man in a silver Chrysler 300 with a disabled tag throw signs into her and her relative's yards as he drove by. The car then made a turn on Caesars Avenue, according to the report.

Police said the victim reported the signs contained hate speech. A relative of the woman, Nitra Stokes, shared with First Coast News a picture of one of the signs. It read, "N----- Lives don't f------- matter. F--- commie Biden to [sic.]"  Another sign said, "Black lives matter only when they are dead" and "Black on Black crime is a beautiful thing."

The victim had a Joe Biden sign in her front yard at the time of the incident, according to the case report.

Stokes told First Coast News she was told by deputies that a crime had not been committed.

The sheriff's office said deputies found a vehicle matching the description parked at 86277 Caesars Ave. Upon finding the car, deputies made contact with Richard John Barry, whom deputies said had a President Trump sign in his yard. Deputies said Barry immediately admitted to throwing the racist signs onto the victim's yard. Barry reportedly admitted to doing it out of spite and said he was sorry, according to the case report

Barry said he tried to go back and pick up the signs but said they were already gone by that time, the case report said. Barry told police he would apologize directly to the victim and her family. He then destroyed the signs in front of the deputies, according to the report.

Nassau deputies advised Barry against reaching out to the woman due to the seriousness of the situation and her emotional state at the time.

Deputies said they then went back to the complainant and told her they had spoken to Barry. The woman told deputies she just wanted the sheriff's office aware of the incident, the report said. Deputies then told her to reach out to the sheriff's office should something like it happen again. An increased patrol was called for around the victim's property, the report said.

Credit: Nitra Stokes
A woman says racist notes (including the one pictured above) were left in the front yards of her 96-year-old grandmother and 62-year-old cousin in Yulee.