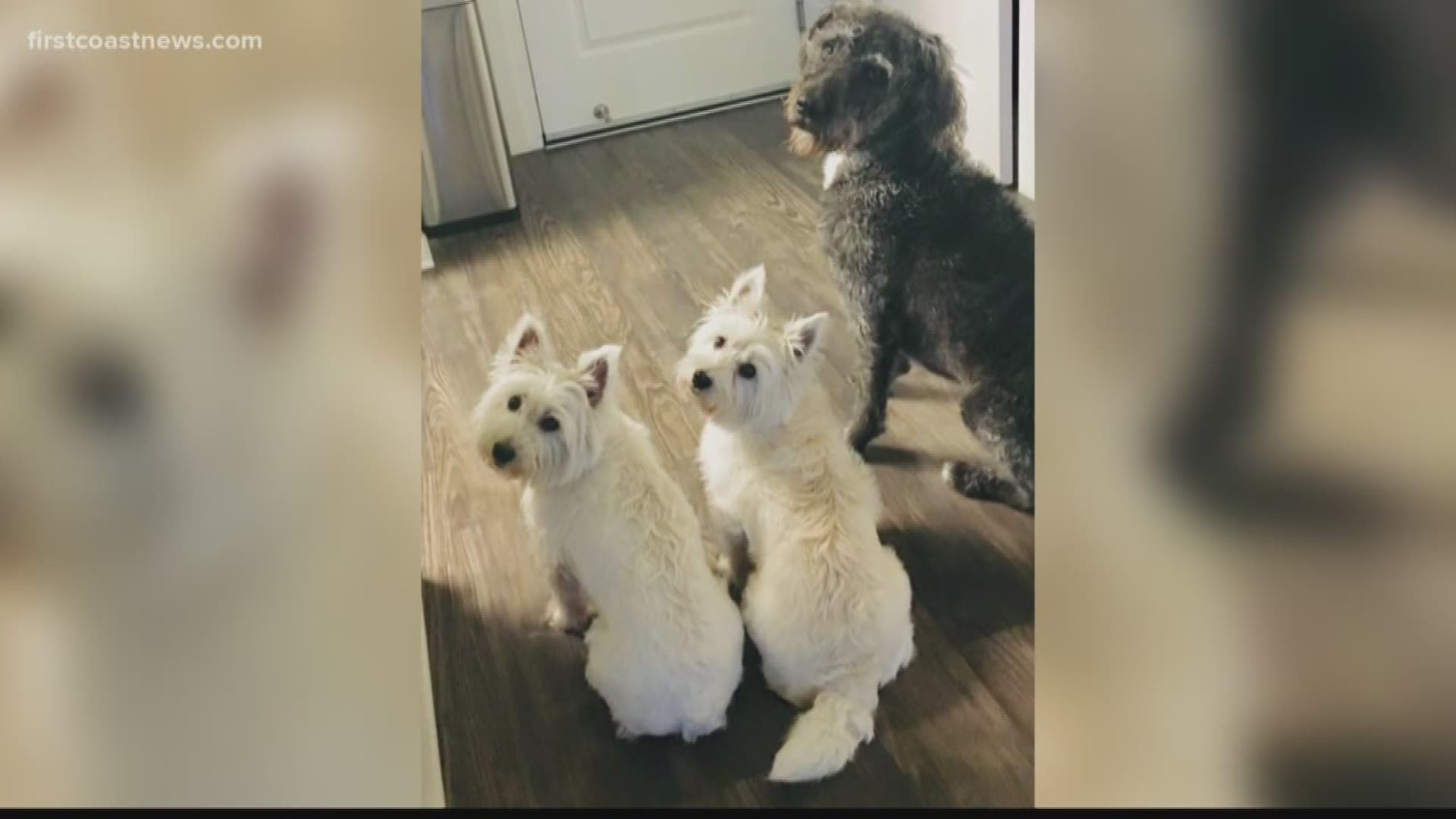 Melissa Martin and her wife's worlds were crushed Thursday. They brought their three dogs, Harpo, Abby and Izzy to play near a pond in North Carolina.

Not long after they got home, their dogs started acting strange, showing signs of liver failure. According to Martin, Harpo was the only one of the three to get in the water. Abby and Izzy just walked down to the water’s edge.

“By the time I got downstairs and to my car, she [Abby] was in a full-blown seizure. Her body was almost in the letter 'C,'” Martin said.

They rushed them all to the hospital, but it was too late.

"Within two hours, we had to put all three down," Martin said.

Shannon Blankinship with the St. Johns Riverkeeper said the algae can clump up at the top of the water and look like blue-green scum, but it also disperses or sinks.

She said algae blooms are formed when an excessive amount of nutrients comes into the waterways. Those nutrients combined with hot weather form the blue-green algae. This type of algae is found usually in fresh, stagnant water, Blankinship said. It can also be a sign of pollution in the water, she said.

"That algae is something that both animals and humans should stay away from because of effects to our health," Blankinship said.

If you're exposed to the toxin, either inhaling or ingesting it, you could get nauseous or rashes.

“There’s also a lot more evidence to look at long-term exposure impacts on different types of health impacts like Alzheimer’s or Lou Gehrig’s Disease … a lot going on neurologically when it comes to how toxins are interacting with us,” Blankinship said.

Animals can show signs within minutes of exposure. Those symptoms include vomiting, diarrhea, weakness, difficulty breathing, seizures and possibly death.

Some samples in the St. Johns River have tested positive for blue-green algae toxins as recently as this summer. You can track algae blooms in your area, and whether or not that algae tested as toxic, on the Florida Department of Health's website.

Since you can’t always see the toxic algae, Blankinship recommends staying away from algae altogether if you see it. She said don’t let this completely scare you from swimming, though.

“If you don’t see it, it may or may not be safe, but if you’re in an area where you see algae in any proximity, or there have been recent reports, I think it’s safe to use caution before entering the water,” she said.

“As a mom and a pet owner, I do try to stay up to speed on where our algae blooms are happening and what’s going on, but I think you have to balance the importance of being able to really enjoy the St. Johns River and being able to get out on the water and have fun,” Blankinship said.

Blankinship warns the most common time of the year for algae blooms is the summer. She also said to make sure you’re not eating fish or another type of seafood that was possibly exposed to blue-green algae.

For Martin, the toxin is the silent killer.

“You would never know that there were toxins in this body of water [that they were at], so I would say don’t think that you know just because of how it looks don’t assume that your dog will be OK," Martin said. "Just stay away from this stuff because it is horrific to watch something that you love go through something like that.”

Martin said she wants to use her story to warn others.

“I guess the reason I’m sharing this because every time I share this story it tears me apart afterward, but it’s the only way other people can avoid it. The more I share it the more I realize other people have never heard of this,” Martin said.