"I had resigned myself to the fact that he might overdose or take his own life. I never dreamed he would take someone else’s life," his statement reads in part. 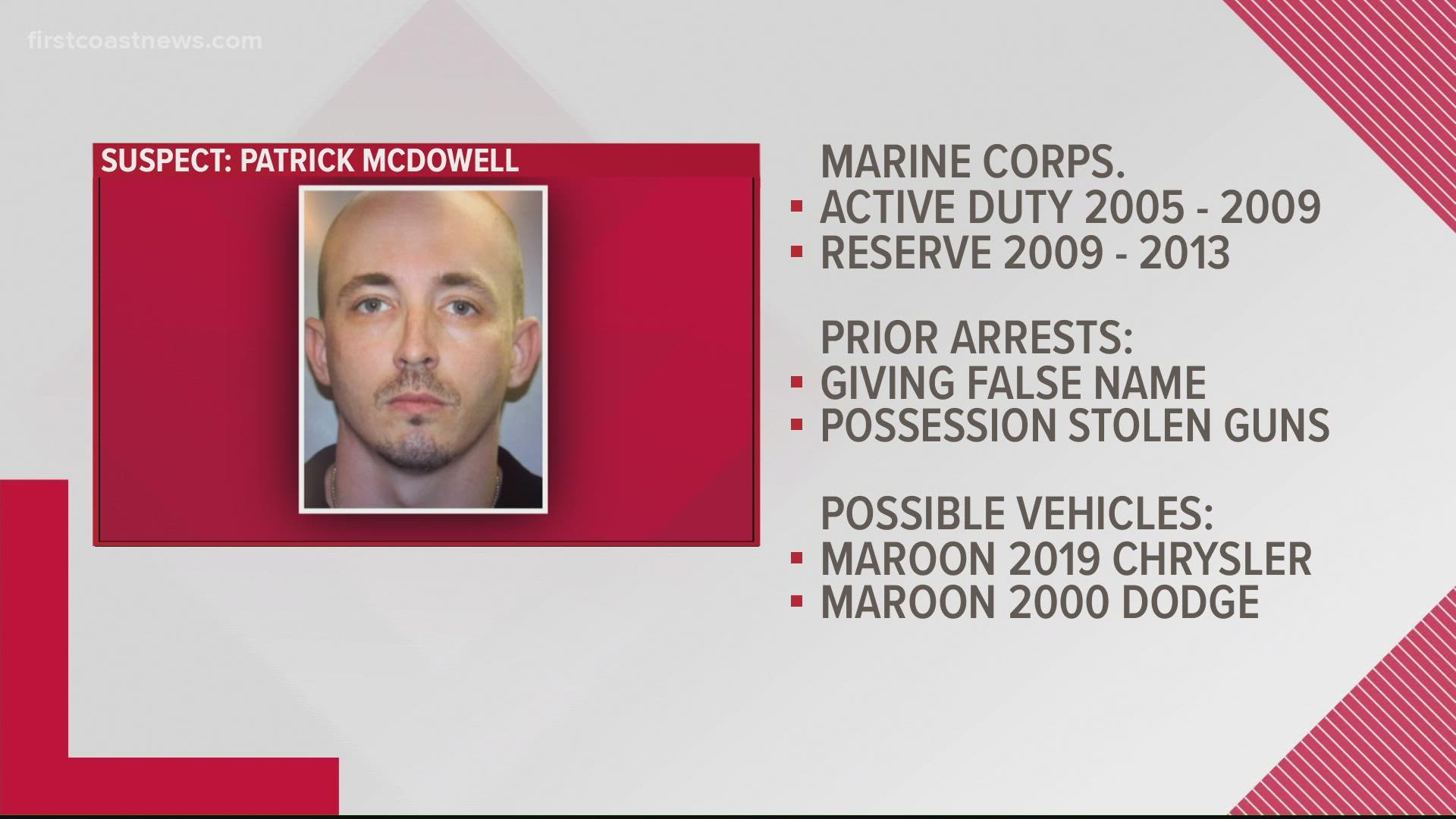 JACKSONVILLE, Fla. — As authorities continue an all-out search for Patrick McDowell, his father released a statement Monday discussing his son's past struggles with mental illness and drugs.

In his statement, Richard McDowell made it clear he did not want to make excuses for his son's alleged actions, offering his regrets to Moyers' family and loved ones.

Richard McDowell explains when his son came home from a tour in Iraq, he suffered from bouts of depression, headaches and nightmares. After a trip to the VA, Patrick was diagnosed with Post-Traumatic Stress Disorder (PTSD) and depression.

Over time, he had seizures, trouble pain management and sleeping problems, the statement says. Eventually, he began taking drugs and committing theft to support his habit, his father says.

Despite some success with Veterans Treatment Court following an arrest, the COVID-19 pandemic left Patrick McDowell with little supervision. After another stint with a treatment facility,  Richard McDowell says he slipped into a 'darker place,' ultimately leading to his alleged deadly encounter with Josh Moyers.

You can read the full statement below:

"I would like to express my deepest regrets to the family and friends of Deputy Moyers. I know that’s small consolation given what a good and decent man he was. If I could change what happened, or trade places with him I would.

"I want to explain a few things about Patrick but please don’t think I’m making excuses for him or trying to rationalize his actions. After Patrick returned from Iraq he enrolled and sought help from the VA for depression, headaches, and nightmares. He was diagnosed with PTSD and depression and some physical infirmities. At first, he was motivated to deal with his demons and started a family. As time progressed, he slipped into a darker place. He had trouble with seizures, pain management, and sleep patterns. He turned to drugs and quit going to his VA appointments. He started stealing to support his habit and was arrested. He was accepted into Veterans Treatment Court and was doing very well. Judge Floyd and David were very engaged with him as were the Lovings at 5 Star.

"When the Covid lockdowns began, the court had to go to virtual sessions which meant less supervision for the mentees. Apparently, this happened at a critical time in his treatment, and he immediately slipped back into his old habits and was arrested in Ga. He was in the Ga jail for a year (and still hasn’t had a trial because of Covid). After a year he came back to Jacksonville and was again generously accepted by the Lovings at 5 Star. You could see the spark had gone out of him and despite our many efforts he slipped over the edge and did this horrible thing.

"I had resigned myself to the fact that he might overdose or take his own life. I never dreamed he would take someone else’s life. There are no excuses for what he did, and he will get what he deserves, one way or another. I’m not going to be a hypocrite and plead for his life; he was well aware of the consequences. If someone had done that to him, I would be enraged, so I understand the hate and vitriol directed at him. Just know that he wasn’t always like this. He is my son and I love him. My heart breaks for Deputy Moyers’ family. I hope, at some point, they can find some peace.