Overnight detours underway on I-95 northbound for $126 million project

The roadwork will cause overnight detours on I-95 northbound over the Fuller Warren Bridge. 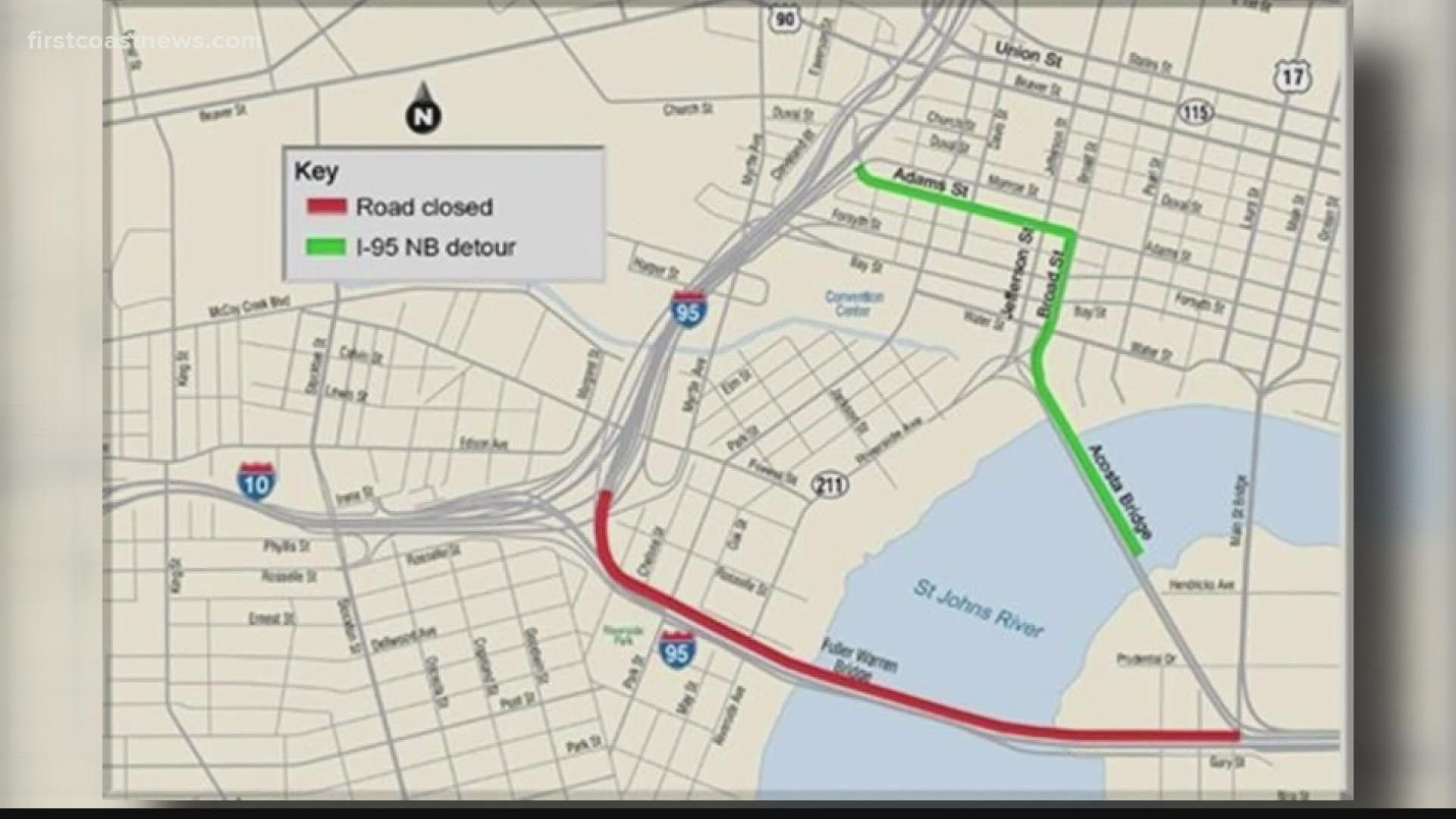 JACKSONVILLE, Fla. — The Florida Department of Transportation's $126 million Interstate 10 and Interstate 95 Operational Improvement Project will cause an overnight road closure beginning Wednesday as crews work on the Fuller Warren Bridge.

“What you’re seeing right here is you see these greenish steel beams. They are steel girders, and they’ve been placed to basically support the bridge deck," FDOT spokesman Hampton Ray explained.

The roadwork will cause overnight detours on Interstate 95 northbound over the Fuller Warren Bridge.

“We’re adding one lane in both directions of the Fuller Warren Bridge," Ray said. "You’ll also see a shared use path, which is basically a bicycle and pedestrian pathway that you can use once it’s complete.”

It will be one of the highest pedestrian pathways in the state.

“The shared-use path connects Riverside with San Marco," Ray said. "It’s on the southside of the Fuller Warren Bridge.”

“I think it’s needed based on the growth in the area," Kerry Nelson said.

Kerry Nelson has lived in Jacksonville since the 1970s.

“The whole northeast Florida area has grown in a big way over those years, and there’s more people moving down now than ever," Nelson said.

“You can see that in the census data. Our region is really exploding in terms of population growth, which is great for communities, but we just need to keep pace with that growth," Ray said.

The project is expected to be completed in early 2022.

. @MyFDOT is working on this $126 million I-10/I-95 Operational Improvement project right now. I-95N approaching downtown Jacksonville will be detoured from 11p-5:30a today through Friday. I'll have details of the improvements live at 5:30 tonight on @FCN2go. pic.twitter.com/rnxDtOyCxm

Many people don't realize #TVnews reporters work out of their cars for most of the day. My "office" has multiple kinds of shoes, camera equipment, food, and lots of caffeine. @FCN2go #ReporterDiary #journalism #journalist #journalists pic.twitter.com/hOLel6YNVj

This map from @MyFDOT shows the detour from I-95N over the @fullerwarren Bridge. Drivers will be detoured to the Acosta Bridge from 11 p.m. to 5:30 p.m. beginning today and continuing through Friday.@FCN2go pic.twitter.com/0Y3qjSJMKH