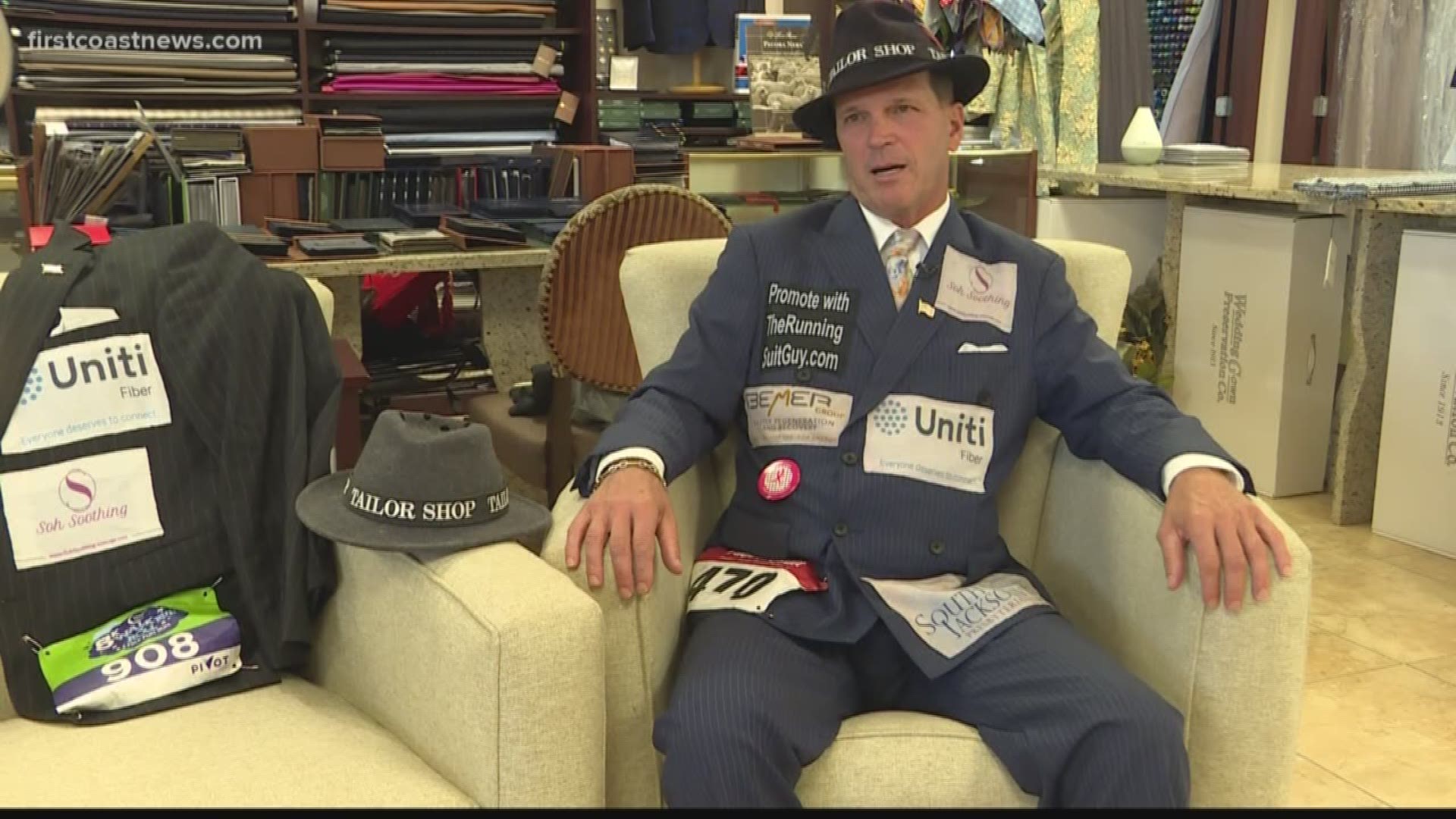 Lots of people have running suits – shorts or sweatpants, a light tee-shirt, maybe even one of those fancy high-tech slick-looking moisture-wicking jobs that make a 12-minute-mile trotter look like a marathon champion. But Chris Gommlich’s running suit is actually a suit.

As in double-breasted and pinstriped, complemented by a French-cuffed dress shirt, floral print tie, spit-shined black dress shoes, and even a fedora.

“Everybody sees the Running Suit Guy because nobody runs in a suit and tie!” Chris recently explained in rhythmic rhyme to First Coast News during an interview at The Tailor Shop on Southside Boulevard in Jacksonville.

“Running Suit Guy” isn’t just a nickname, it’s Chris’ business. But it’s the result of an evolution of ideas. He was already a marathoner in his native Long Island, when about 10 years ago a Halloween party costume idea came to him.

“Indiana Jones is my favorite movie character,” he said. “So I go to the Halloween party … and the party’s over.”

He thought he’d have to wait a year to dust off the “Raiders of the Lost Ark” bomber, boots, fedora, and even whip. Then a lightbulb thought occurred.

“Wait! I can run a race dressed like Indiana Jones!”

“I wondered if I can put on a suit and tie, make it really formal like I’m going to go out to dinner, dancing, whatever – I wondered if I could run like that,” he recalled.

Chris knew he was on to something, realizing that he could use the unmistakable attire on his six-foot frame as advertising space. Already impossible to miss, his ensemble is now is emblazoned with ads of his several sponsors.

A very sad event in his life led him to reserve space for philanthropic causes: he lost his sister Joanne to a 13-year battle with breast cancer.

“She was the strongest woman I’ve ever known,” Chris said with a sigh. “Life handed her lemons and she made lemonade.”

The way Chris describes it, Joanne shared his zest for life. “She was doing the chemo and all of that, and she lost a lot of her hair. And we decided to make it a fun time, and we had a head shaving party.

“You know, if it’s going to happen let’s at least embrace it,” he said was their outlook.

He began supporting the Carol M. Baldwin Breast Cancer Research Fund, a New York-based organization whose namesake is a 28-year breast cancer survivor and the mother of one of the world’s most famous acting families.

“When I moved down to Jacksonville [in spring 2017],” Chris explained, “I was going to keep on promoting the Carol Baldwin until people told me about the Donna Foundation.”

Chris doesn’t limit himself to breast cancer benefits. Regardless of the cause, if there’s a road race near Jacksonville, chances are he’s in it – his weekend schedule chock-full of events long in advance.

But while he brought his passion and stamina south, Chris needed to shed some threads for acclimation to the thick and juicy swelter of First Coast air in summer.

“You know, I can’t run in these suits from New York, I need a lightweight, breathable suit,” he said.

That’s where Daniel Motorca, owner of The Tailor Shop, came in. A mutual acquaintance introduced the two shortly after Chris arrived in town.

“I knew right from the beginning that he needs a lot of help,” Motorca told First Coast News with a laugh. “I couldn’t wait to take the job and I knew I could deliver exactly what he was looking for.”

An expert with 30 years of experience customizing and creating suits from scratch, Motorca began describing his consultations with Chris in his rich Italian dialect and using vernacular that would go right by the average listener like Chris on the race course.

“We got all the way to the fibers that he needs for this climate,” said Motorca. “So, like super-140s, seven-ounce weights, and all that.”

In other words, lighter material. But for a guy of Chris’ fiber, that didn’t narrow down the fibers nearly enough.

“Linen was out of the question,” he said, citing one example of disqualification. “Definitely it’s a great product to wear where you don’t put a lot of stress on it, you don’t sit on it, you don’t turn around, you don’t crumble it,” he detailed, “but for something that he needed I knew I had to be very selective.

Some of the many variables?

“Thickness of the fibers, how tight it is, how it allows air to travel, the airstream to cool … that starts, number one, and then moves on to the process of building the garment the proper way,” said Motorca.

Our interview carried the feel of a scientific education in brief, one that most business suit wearers – most runners, too – probably never have to think about.

“We didn’t put any glue in there so we wouldn’t clog all the airstreams that travel through the cloth,” he went on.

But even the precision crafting of his suits doesn’t mean Chris doesn’t sweat while running. He does, profusely.

“How could you not?” he revealed. “But I throw a little water down my back, right? I get that chill, and then I feed off the energy of the spectators.”

One thing he won’t do is take off even the jacket, no matter the heat.

“That suit stays on, come hell or high water,” he affirmed. That includes the fedora, although the one seeming allowance he gives himself is a series of ventilation holes punched through the crest of the dapper headwear.

The race course isn’t the only unusual place Chris can be seen in a suit. He told us he’s worn the entire regalia in the ocean, in swimming pools, and – a secret he said few people know about – in the shower.

“When I’ve been in the ocean in my suit, I come home and I take a shower in my suit because that rinses out the salt out of the suit. Then I hang it up, usually in the shower because it’s going to drip dry, and by the next day it’s looking pretty good!”

Remarkably young looking for his age – he resembles a young Frank Sinatra in the legendary crooner’s Rat Pack prime – I learned during our conversation that it was Chris’ 60th birthday. But after our interview and later catching him in action at a Zero Prostate Cancer race days later, it seemed that the words Chris used to describe his suits could easily be used to depict himself.

So, if those are Chris’ secrets for keeping his body and his suits looking so young, there’s one more, about how he keeps treading in those threads, even when the only thing drenching them is sweat.

“I make people smile,” he began, describing a reciprocal exchange of energy. “You smile, I smile, I run another mile!”