‘Oh my God, this is some bulls--t': Investigation shows suspended Clay Sheriff Darryl Daniels’ officers doubted his story from the jump

FDLE says a Clay sheriff’s report of a stalker raised “red flags,” but subordinates deferred to the Fellow Officer Rule, trusting him -- not the woman they arrested. 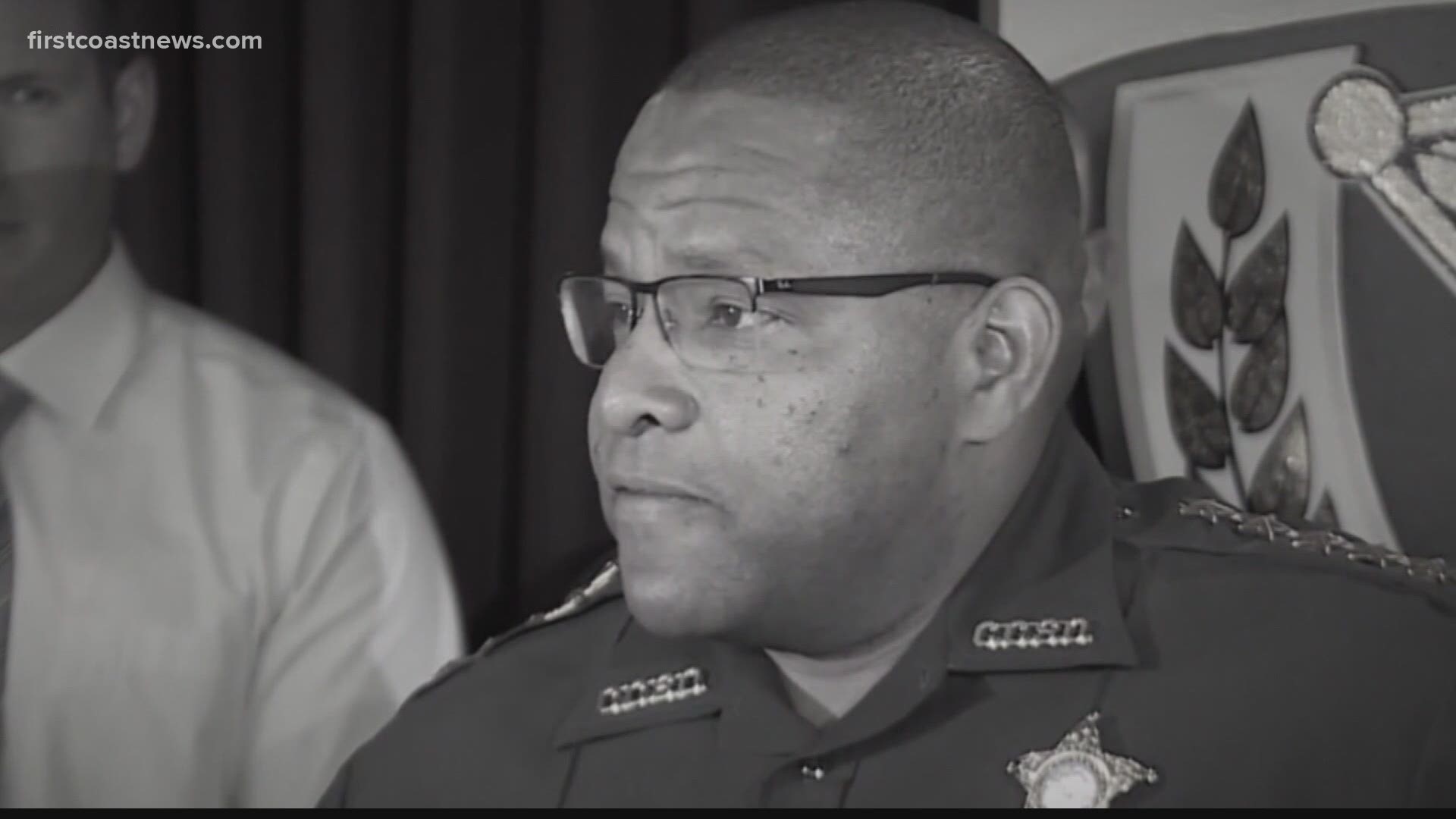 JACKSONVILLE, Fla. — When officers responded to Clay County Sheriff Darryl Daniels’ radio call for help on May 6, 2019, they implicitly trusted their boss.

At his direction, they rushed to the scene, stopped the car his longtime mistress was driving and placed her under arrest.

According to a year-long Florida Department of Law Enforcement investigation into that night and its aftershocks, Daniels told his officers Cierra Smith was a stalker. He told them he’d tried to get an injunction to protect himself from her but had been denied that very day.

He told them Smith was “crazy.” He wanted her arrested – but he didn’t want her in his  jail. He wanted her taken to Jacksonville instead.

The findings, detailed in a 50-page report released after Daniels' Thursday arrest and subsequent suspension, offer the first comprehensive look at the scandal that rocked the Clay County community and upended both law enforcement and a primary election – now just two days away.

According to the report, Daniels even then sensed the portent of that disastrous night.

“A million things are going through my head, like 'how does this end?'” he wondered. “I started thinking: ‘Clay County Sheriff has to kill a female, young female in her vehicle...’ Eh, that’s not a good look for myself or the county.”

According to the report, he concluded, “I guess I’m gonna have to open up Pandora’s Box here.”

"The sheriff didn't tell me that."

The call for assistance came at 6:22 pm. Sheriff Darryl Daniels (“SO1,” per radio hierarchy) reported a “13” -- suspicious vehicle.

Short-staffed and keenly attuned to a summons from the boss, Sgt. Christopher Ruby rushed to the parking lot at Oakleaf Village Elementary School in nine minutes, beating Deputy Joseph Glenn to the scene.

In a written statement, Daniels would say he’d called his team to “for my safety” because he felt “I would be exposed to imminent danger.”

According to the report, within minutes – 5 to be exact, 6:27 pm – Daniels radioed “S77.” Situation under control. But when Ruby says arrived at 6:31 p.m., the sheriff claimed he was a victim of stalking, and told Ruby to place Smith under arrest.

Ruby told investigators he suggested alternatives. “Do you just want me to tell her to leave or do you, you know, want me to go ahead and book it?” Ruby asked Daniels.

But Ruby would discover there was a lot the sheriff didn’t tell him, including that Daniels had had a 6-year affair with Smith, that she had never previously followed or “stalked” him, and that the sheriff had not sought -- or been denied -- an order of protection.

In fact, FDLE found 27,371 cell phone interactions between Smith and Daniels from December 2017 to May 2019, including a “mutually consensual exchange of sexually explicit message, videos and images” – which Sheriff Daniels admitted receiving and sending. The exchanges also included $30,000 worth of Cash App transfers from Daniels to Smith.

“I’m like what the f--k?” Ruby would recall to FDLE. “You know? ‘Cause the sheriff didn’t tell me that.”

Ruby told FDLE he didn’t understand how a county sheriff could be denied a request for a protective order for stalking. Lt. Baylor Alexander found the claim implausible. “That kind of threw me some red flags up there, too,” he said.

The injunction was a key part of Ruby’s probable cause determination when arresting Smith that night. According to FDLE, Daniels told several others the thwarted protective order story, including Undersheriff Ray Walden and his wife, Denise.

But in his interview with FDLE, the sheriff denied ever saying that he’d sought a court order.

Which is one Daniels’ claim that accords with records on file. He never did.

"This could turn into a sh-- storm"

Despite some misgivings about the circumstances on May 6, 2019, Ruby felt compelled to make the arrest.

“I don’t really have a choice. It’s domestic stalking … so I gotta take action,” he told investigators. He said he worried about what could happen if he didn’t act. “[If] we do absolutely nothing ... Jesus Christ. This could turn into a sh-- storm."

After making the arrest, he collected a sworn statement from his boss.

“He kept having his wife review it, which I thought was kind of odd, ‘cause to me, he’s the sheriff. He’s the man,” Ruby told FDLE. “…I don’t know, I just had a little bit of an issue with that.”

Ruby also had questions about the sworn statement. “His statement was truthful and accurate,” he would tell FDLE. “It just had a lot of holes in it.”

But Ruby did as he was told – to a point. After Daniels signed the sworn statement, he told Ruby “he didn’t want her in his jail. He wanted her possibly in Jacksonville’s jail.”

Ruby told Daniels that was a non-starter. The sheriff would need to “work something out with [Jacksonville] Sheriff Mike Williams. That’s on you. It’s not on me. I can’t transport her to another place.”

“If she committed a crime in Clay County,” Williams told investigators he told Daniels, “she needs to go to jail in Clay County.”

About an hour after the sheriff first called for help, at 7:30 pm, Ruby called his immediate supervisor.

“He didn’t believe there was enough probable cause to conduct the arrest,” Lt. Baylor Alexander told FDLE.

Alexander had questions of his own.  He ordered Ruby to conduct a second interview with Cierra Smith. And after learning more about the couple’s long history together, Ruby was stumped.

“So after a good two-hour interview, I have to write a statement and it ends up being a five-page statement … and I’m like ‘Oh my God, this is some bullsh*t.”

"Those guys will do whatever I tell them to do."

At 7:48 p.m., Alexander called Assistant State Attorney Pam Hazel. She told him she “did not feel comfortable putting the woman in jail and ‘did not believe there was probable cause for the arrest.’”

CCSO Director of Operations James Morgan also had “concerns about the validity of the arrest” telling FDLE he “was uncomfortable with it.”

Once Morgan learned the relationship between Daniels and Smith “was much more than just a passing acquaintance,” he brought the arrest to a screeching halt. Smith “should not be taken into jail” he decided, and Ruby should “do nothing” until they figured out what to do.

Daniels would later say he didn’t believe there was probable cause to arrest his mistress. Even though the witness says he demanded it and records show he was present when the arrest occurred, he told FDLE “I don’t want to put myself in a position where I’m making calls at the scene as the sheriff.”

He added,  “Those guys will do whatever I tell them to do.”

Deputy Joseph Glenn, the second officer on the scene that night, told FDLE the second interview with Smith made that conflict manifest. Officers “determined there was a conflict of interest there and that we shouldn’t arrest based on the sheriff being the alleged victim.”

Asked if he would’ve arrested Smith if Daniels didn’t order it, Glenn said he relied on something called the Fellow Officer Rule, “which caused him to believe Sheriff Daniels without further investigation.”

CCSO General Counsel Jeff Davenport echoed that in his FDLE interview. “It’s one thing if it’s another patrol deputy telling you that. It’s another thing entirely if the sheriff does.”

He compared it to the sheriff musing aloud, “Hmm boy, I would like some coffee this morning.”

Davenport observed, “If it wasn’t the sheriff, it probably wouldn’t have been looked into it as much as it was. ...Being that Sheriff Daniels was a law enforcement officer … that’s what led us [to make the arrest].”

The next day, the sheriff said he wanted to drop the case altogether.

The case was dropped.

But Pandora’s Box was open.