First Coast News obtained another email from a viewer, claiming the puppy it purchased from Petland got very sick after a few days they brought it home. 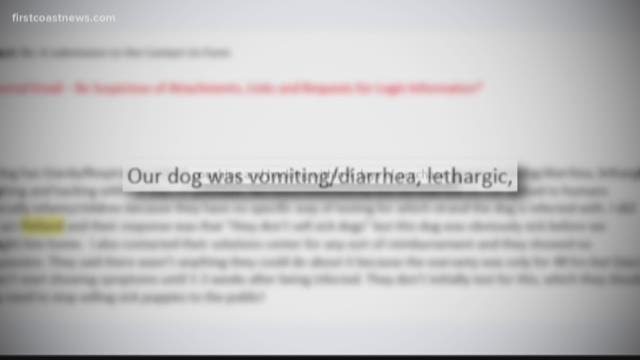 Another family has stepped forward alleging Petland on Beach Boulevard has sold them sick puppies, the store itself is responding to the allegations.

Back in November, First Coast News first told you about a sick Yorkie named Thor. His owner claims he got him at Petland and that the store knew he was sick. Today, Thor is in good health and Petland said it's reviewing the claim.

First Coast News obtained another email from a viewer, claiming the puppy it purchased from Petland got very sick after a few days they brought it home.

The owners didn't want to go on camera but told First Coast News they were afraid the dog would pass an illness to their toddler, so they had to give it back to Petland.

We reached out to Petland about this family's complaint. In an unsigned email, Petland denied selling any sick puppies and stated that all of their dogs are seen by two to three different vets before being available to customers.

Petland also said it offered to cover the vet bills in this case.

We reached out to Petland's corporate office to determine whether or not the company plans to open an investigation into the allegations. We have not heard back.

Despite multiple claims of sick puppies being sold from the pet store, customer Seth Happel said he was happy with his experience. He purchased an Australian Sheppard and said he couldn't be happier.

"I had no problems," Happel said. "A bundle of energy, just a great dog for our family."

The Jacksonville Humane Society also wanted to remind folks that ten miles down the road, hundreds of dogs are waiting to be adopted. They told First Coast News "You also save a lot of money on future vet bills when you adopt because they already come spayed and neutered with a lot of vet care. You'll save a life and save up front."