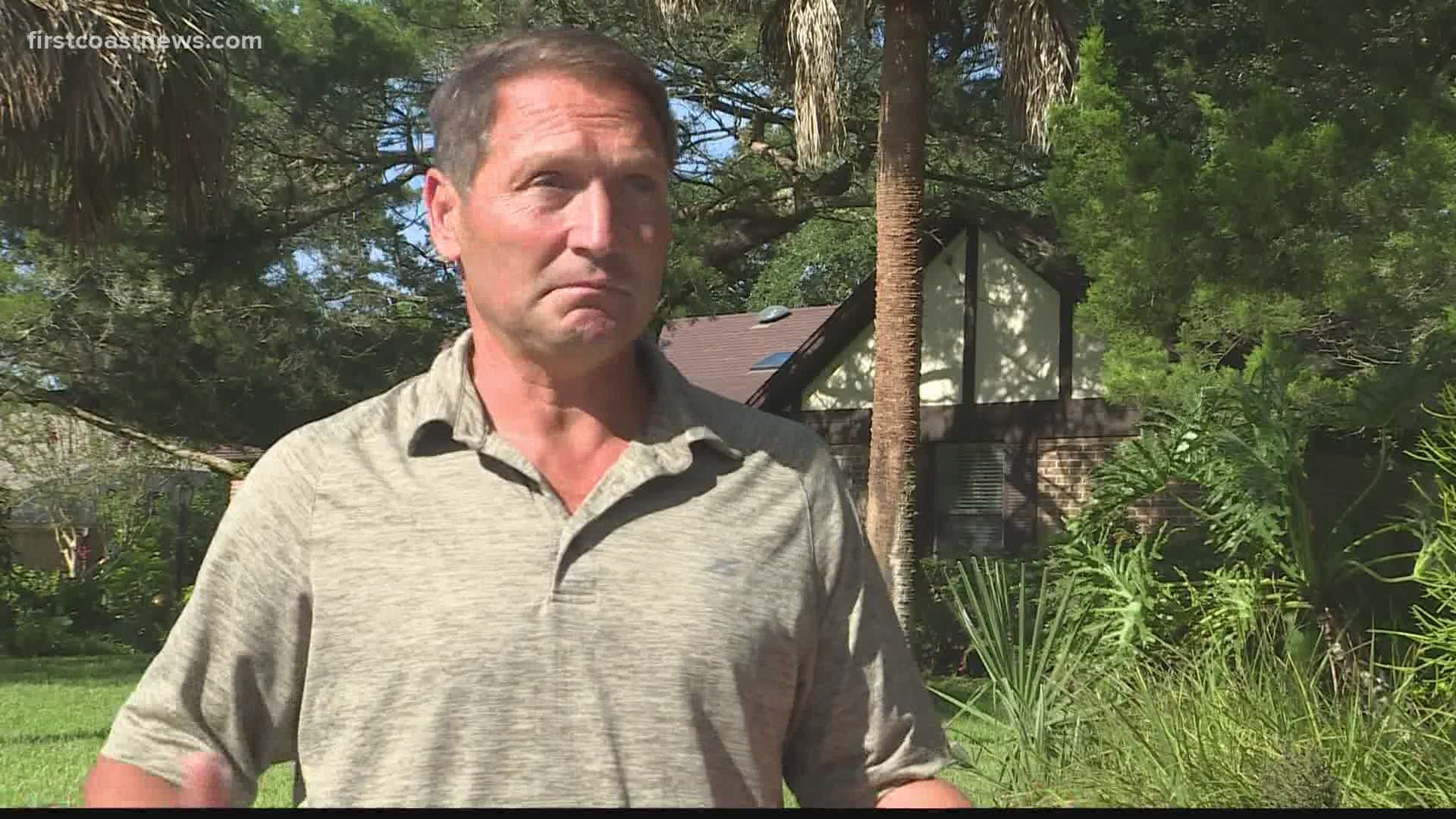 ST. AUGUSTINE BEACH, Fla. — As neighbors in St. Augustine Beach’s Ocean Walk neighborhood gratefully put tropical storm Isaias behind them, several remain convinced that a recently filled in drainage ditch near their homes will cause catastrophic flooding, sooner or later.

Leigh Ward, who’s lived on Lee Drive since 1993, told First Coast News “the flooding is probably 10 times worse” since the city recently installed a drainage pipe in a ditch that ran behind her home and several others, parallel to nearby Mickler Drive.

In a city commission meeting Monday night, St. Augustine Beach public works director Bill Tredik told those present “I firmly believe that the installed pipe is not the problem,” but along with several officials discussed asking engineers and the installing contractor to review the project.

Before the meeting, Ward voiced skepticism, explaining that she and her husband had expressed concern about erosion of their property for decades – they’ve been through three fences and she said soil movement has caused cracks in the structure of their in-ground pool – but that they didn’t ask for the ditch to be filled in.

“We had quotes on bulkheads,” she said, recalling estimated costs about $25,000 to $30,000. The reported cost of the drainage pipe and backfill was about $425,000, and the city acknowledged Monday that further costs could be necessary unless a contractor is liable for any defects.

“They got the money in the ground and they can’t take it out,” quipped James Dougherty, who lives across Lee Drive from the Wards. Despite being that much farther away from the new pipeline, Dougherty called the flooding since the installation “unprecedented,” saying “the only thing that’s changed is they filled the ditch in.”

Specifically, Dougherty said that in his two decades living in the neighborhood, he had experienced water reaching his garage only once before 2020. But it didn’t take a major storm to nearly match that.

“The last rainy storm we had, back in June, the water came up as if it was one of the worst hurricanes in 20 years.”

Dougherty’s contention – shared by several neighbors – is that water could enter the ditch anywhere along its length. Now there are only a few grated entry points along its roughly quarter-mile length.

“Ground water cannot get into a closed, sealed pipe,” he reasoned.

Another neighbor told First Coast News that the city had explained to her that during storms, portable pumps can be brought in to pull water from the neighborhood to the drainage pipe. But Dougherty said that’s just an additional and ongoing cost to the pipe installation price tag.

As the city grapples with next steps, Ward, Dougherty, and their neighbors say they’re losing sleep about what they fear is inevitable.

“If it scared us so much after a three-day rain (in June), we’re going to all lose our homes in a hurricane,” Ward concluded.

RELATED: Tuesday’s flash flooding a concern for some Mandarin residents