Deputy Moyers was shot twice during a traffic stop in the pre-dawn hours of Friday morning in Callahan. 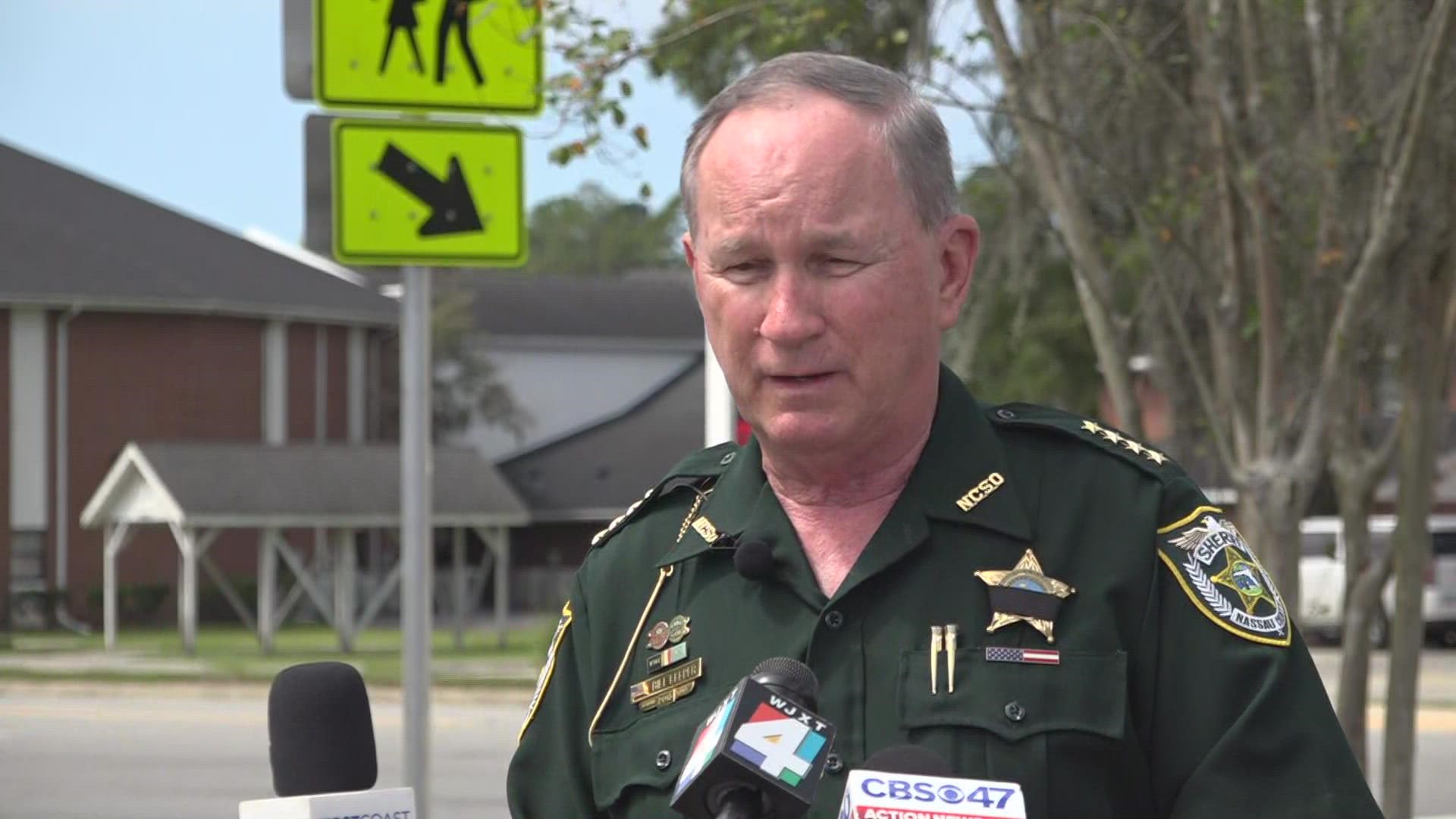 JACKSONVILLE, Fla. — Nassau County Deputy Joshua Moyers is expected to die from his injuries sustained from a shooting Friday morning.

Sheriff Bill Leeper confirmed the news at a Saturday afternoon press conference. Moyers' family is in the process of finding recipients for his organs.

"I want to thank all the doctors and medical personnel at UF Health Jacksonville. They've done a tremendous job, they're some of the best of the best," Leeper said, visibly upset. "There was just nothing they could do for Josh."

Moyers, 29, was shot twice during a traffic stop near Micker Street in the Callahan area in the pre-dawn hours of Friday morning.

"It's just senseless," Leeper said Saturday. "We never know what's going to happen in the morning. This was just a traffic stop, and it turned out to be a murder of the deputy."

The shooting of Deputy Moyers had a resounding effect on the small community, something Sheriff Leeper expressed in a Friday press conference when he became emotional after mentioning Moyers was planning a wedding with his fiance.

Leeper said he spoke to Moyers family, some of whom had to fly into Jacksonville after hearing the news.

As the community learned of the shooting and the worsening condition of Moyers, more and more people and organizations have stepped forward to lend a helping hand where they could.

"We've had an outpouring of support, and people just feeling they need to do something," Leeper said. "We would like for prayers for Deputy Moyers and his family and all people in law enforcement, they need their help now especially."

In a heartfelt message Saturday night, the sheriff's office tweeted about deputies starting their first shift without Moyers. The agency wrote " Rest easy knowing Bravo Team is carrying you with us. We love & miss you Moyers."

Tonight we begin our 1st shift without you. Tonight we put on a brave face and hide the tears; as there is work to be done…As this night won’t be easy, we hope to soon bring this nightmare to an end. Rest easy knowing Bravo Team is carrying you with us. We love & miss you Moyers pic.twitter.com/tOEhpnl9CI

Family and friends have created a GoFundMe to help make things just a tad bit easier as Moyers' fiancé prepares for a life without him. You can click here to donate.

BACKGROUND: His shooter, believed to be 35-year-old Patrick McDowell, remains at large with scores of law enforcement officers from several different agencies searching for him.

During the incident, Moyers got out of his patrol car and approached the vehicle which was driven by a man, believed to be McDowell, with a woman in the passenger seat, the sheriff's office stated.

While attempting to get information from the driver, Moyers learned that he did not have a driver's license and the tags on the vehicle were registered to a vehicle that was stolen in Jacksonville, Sheriff Bill Leeper said.

Moyers asked the driver if he had any weapons and asked him to step out of the vehicle, Leeper said. Moyers then grabbed the handle of the suspect's vehicle to open the door as a nearby train approached the crossing.

The driver’s arm then came out of the window and shot the deputy in the face near his eye and in his back, Leeper said. After the shooting, the suspect sped off through the railroad crossing.

Not long after the shooting took place, another deputy who responded to assist Deputy Moyers, saw him on the ground. Moyers was rushed to the hospital in critical condition.

During the manhunt for McDowell, which is now on its second day, a K-9 officer was also shot. The K-9 was taken to a veterinarian and is expected to be okay.

The Nassau County Sheriff's Office, joined by agencies from around the state, is searching a five square-mile area in the area for McDowell. As many as 300 personnel are involved in the search.

First Coast News will continue to update this story throughout the day.