He didn't know whether the woman he pulled from a rip current survived, and no one close to her knew who he was, until he saw the story on First Coast News. 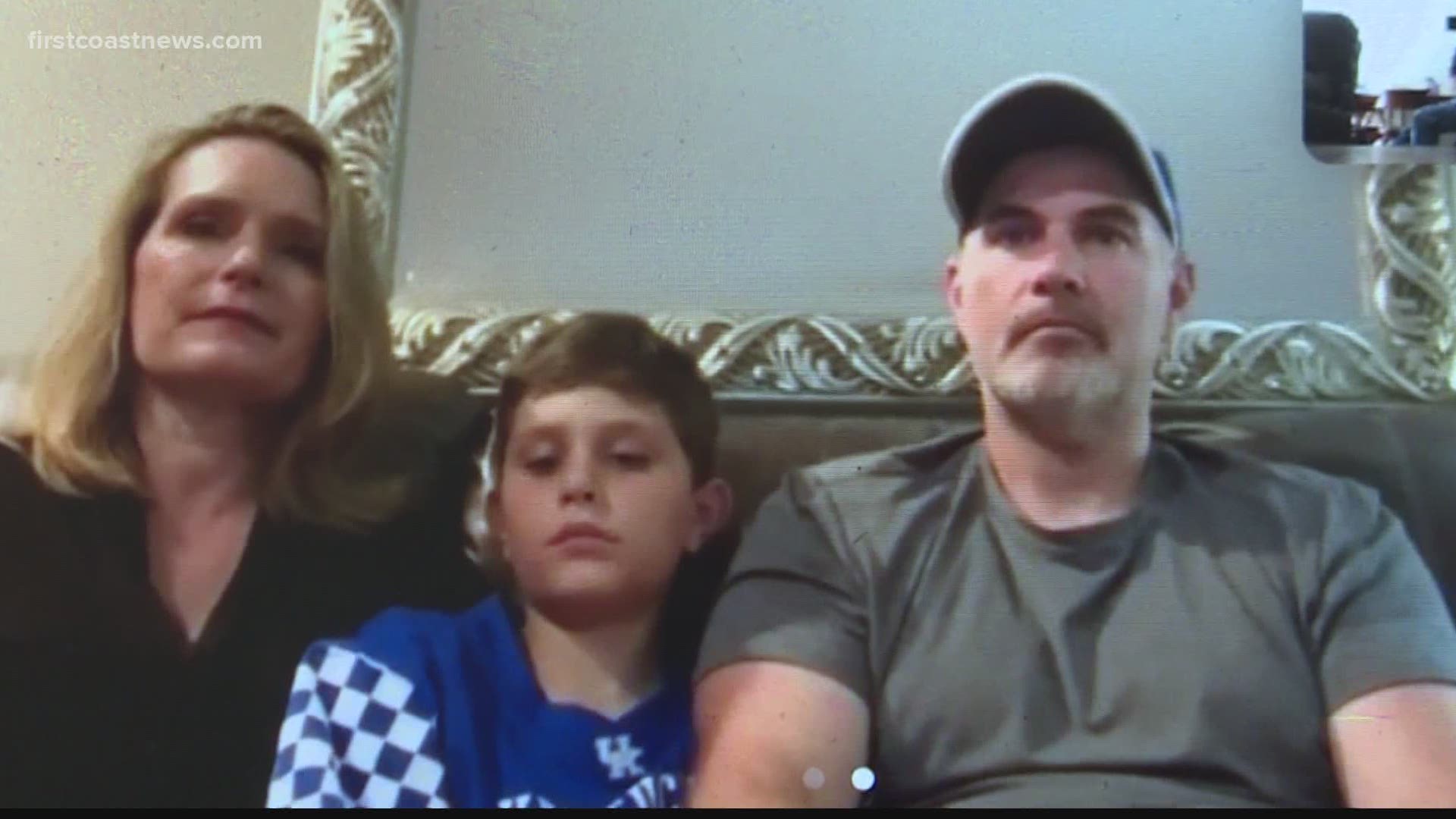 ST. AUGUSTINE BEACH, Fla. — A day after First Coast News aired the story of a mystery man saving a woman from drowning at St. Augustine Beach, the mystery is solved.

Rod Boothe, his wife Andrea Boothe and their 9-year-old son Connor, who all live in Atlanta, were visiting friends during the Memorial Day weekend and spent Saturday on the sand near the St. Augustine Beach pier.

“I’ve been doing an internet search every morning just to see if anything showed up,” Rod Boothe said from his Atlanta home of the days since the near-drowning. After risking his own life to save the woman, he asked first responders her condition. But because of laws protecting the privacy of patients, the first responders only told him that medics had been able to get her heart beating again.

“When they told me that they’d revived her heart, that she had a heartbeat, that made me feel a little better," he said. "But I still didn’t know yet. That’s what bothered me. It’s actually bothered me ever since then because I’ve been losing sleep every night.”

Boothe didn’t realize that while he was agonizing in uncertainty about the woman’s condition, many of her loved ones were agonizing that they didn’t know who he was or how to find him.

But all that internet searching paid off when Boothe found a link to the story aired on First Coast News Tuesday evening, which included pleas of finding him so family and friends can thank him. We facilitated them connecting, and although the woman has so far declined to be interviewed, Boothe has been in touch with people close to her.

His narrative of the day started with the family buying a boogie board for Connor, which the boy quickly put to use in the surf. But worry would soon follow.

RELATED: Meet the Mystery Man: We now know who saved a drowning woman at St. Augustine Beach on Saturday

“Andrea told me, ‘He’s starting to drift out a little bit,’” he said.

When he stopped to look, Boothe said his son “went from probably 20 feet to 100 feet [away from shore] within ten or 15 seconds. That’s how rough it was.”

When Boothe went in to the water to retrieve his son, he got another indication of danger.

“This older guy was passing me," he recalled. "[He said] 'It’s a really rough rip tide out there.’”

Boothe said a subtle but crucial element was that he and his wife had found and attached a wrist strap for Connor to use. Without it, the Boothes fear that the waves might have separated him from the buoyant board.

Asked whether he believes he would have made it back to shore, the boy told First Coast News, “No, I would not have survived because I couldn’t even [touch bottom].”

But once he was able to assure that his son was okay, his son told him, “Hey, I heard someone yell 'Help!'”

Instead of returning to shore with his son, Boothe turned to face the ocean and then heard a voice.

It was a 14-year-old boy who had been struggling to get back to safety along with a 12-year-old friend. That’s when Boothe said he turned and looked in a different direction and saw a woman barely above the surface.

“Way out there," he said, "and she was bobbing up and down. She went underneath, and I dove down, pulled her up, and when I saw her her eyes were glossed over, her lips were already blue, she was foaming at the mouth and nose.”

“I had to get her in fast,” he continued. “When I finally got to about waist-deep, the son came back and saw her and started panicking and crying. And he was asking if she was going to be okay. And I said, ‘Run in and yell Help!’”

Fortunately there was help nearby. The exhausted Boothe handed the woman off to others, who then relayed her limp body to two nurses who were at the beach with friends a short distance away.

“Just looking at the color on her face, we both went into ‘nurse’ mode,” said Leanna Swilley. Coincidentally, she and the other nurse, Kelsey Genners, were part of the same group of friends but had never met before Saturday.

“Her mouth was blue, there was foam,” Genners said she observed as the two began performing CPR on the woman’s lifeless body.

From there, an ambulance crew transported the woman to Flagler Hospital, where doctors were able to ensure the woman’s survival and recovery.

“The doctors said that it was 100% the quality of the CPR that was done in those first few minutes,” Laura Iwanski, a close friend who was at the beach with the woman, told First Coast News.

Finally, after nearly four days of wondering, Boothe’s worry turned to reflection on a remarkable chain of events.

“It’s nice that the pieces fell in place that actually led to a life being saved,” he said. "If Andrea hadn’t told me to go in and get Connor, and then if Connor hadn’t told me that he heard someone yell ‘Help,’ and if I hadn’t gone out there and the kid said please help my mother, and that hadn’t caused me to look in a completely opposite direction, we wouldn’t even be sitting here having this conversation.”

Not to mention the serendipity of having those nurses so close and so prepared.

“That’s part of the pieces that fell in place, that they were there,” he said.

But Boothe had to be reminded that his part – taking on a tremendous risk to save a stranger – was both courageous and crucial.

“The big thing is that we gave her a fighting chance to live," he said. "That’s all that relieved my mind coming out of this.”