Michigan marriage proposal is straight from 'a galaxy far, far away'

Colin Wever knew Brooke Seymour was the one the moment he met her. Since they're both huge Star Wars fans, there was only one way their 'Saga' could continue. 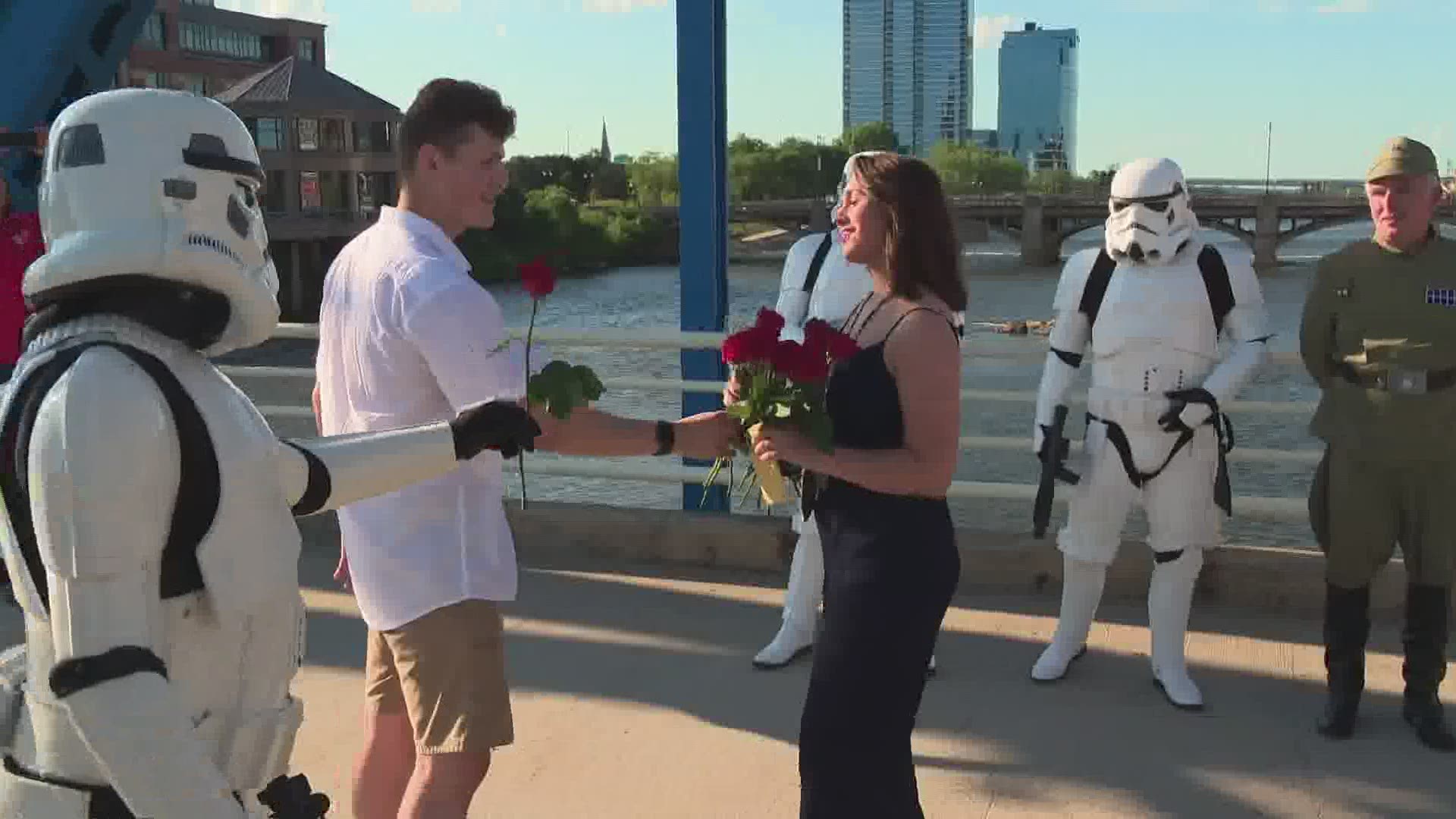 GRAND RAPIDS, Mich. — Preparing to propose marriage to the love of your life can cause a lot of anxiety. Many thoughts bouncing around in the head of the person doing the proposing, likely include, but aren't limited to:

How and where is best to do it?

Will it be memorable enough?

A Michigan man recently made sure when the moment came for him to get down on one knee, it was going to be straight from "a galaxy far, far away."

In the fall of 2019, Colin Wever had a chance meeting a young lady by the name of Brooke Seymour. Neither was in a relationship at the time, but it didn't take them long to learn that the force was with them.

"We just had this connection, and found out we both loved Star Wars," said Colin, 24. "We're just both big nerds."

Credit: Colin Wever
On the day of their second date, Brooke was attacked by a dog and had to spend time in the hospital recovering. Colin was by her side.

"On the day of our second date, [Brooke] got attacked by a dog," said Colin. "She had to be taken to the hospital, which is where I was able to meet her whole family."

Brooke would recover, and soon after, she and Colin to begin writing Episode 1 of their new saga together.

"I don't think that there's a time schedule for love," Colin said. "Everybody's story is different."

Colin says there was a specific moment when he knew that Brooke was his chosen one.

"She corrected me on something Star Wars and no one's ever done that before," Colin said. "I was, like, 'Wow. This is amazing.'"

As the couple continued dating into 2020, their relationship grew stronger. That's when Colin decided he wanted to propose.

"The proposal had to be something Star Wars-related," Colin said. "I thought up my plan in one day."

Colin contacted several his friends in the Great Lakes Garrison, which is a Michigan-based Star Wars costuming club, of which he's also a member.

"The costumers would meet at the Blue Bridge in downtown Grand Rapids, helping me create the atmosphere I needed," said Colin. "Brooke would get dropped off by her friends at the opposite side of the bridge, where she will be greeted by Darth Vader, who will hand her a rose then escort her to the middle of the bridge where she will find me."

Around 5 o'clock that afternoon, the costumers started showing up. Colin ran them through a dress rehearsal with all of them, then dispatched them to the parking garage across the street to get changed.

It didn't take long for several Stormtroopers, Sand People and Tie Fighter Pilots to start loitering all along Front Ave.

"It was all coming together," Colin said.

Around 7 p.m., Colin got a text that Brooke was close to being dropped off.

Credit: Colin Wever
Only at the engagement of Colin Wever an Brooke Seymour would you see a Tusken Raider sniffing a rose held by a Tie Fighter Pilot.

"I arranged her to have a girl's night out with a few of her friends," Colin said. "All she knew was that they were going to the J.W. Marriott for some drinks.

"Well, the entrance to the Blue Bridge is right next to the Marriott." 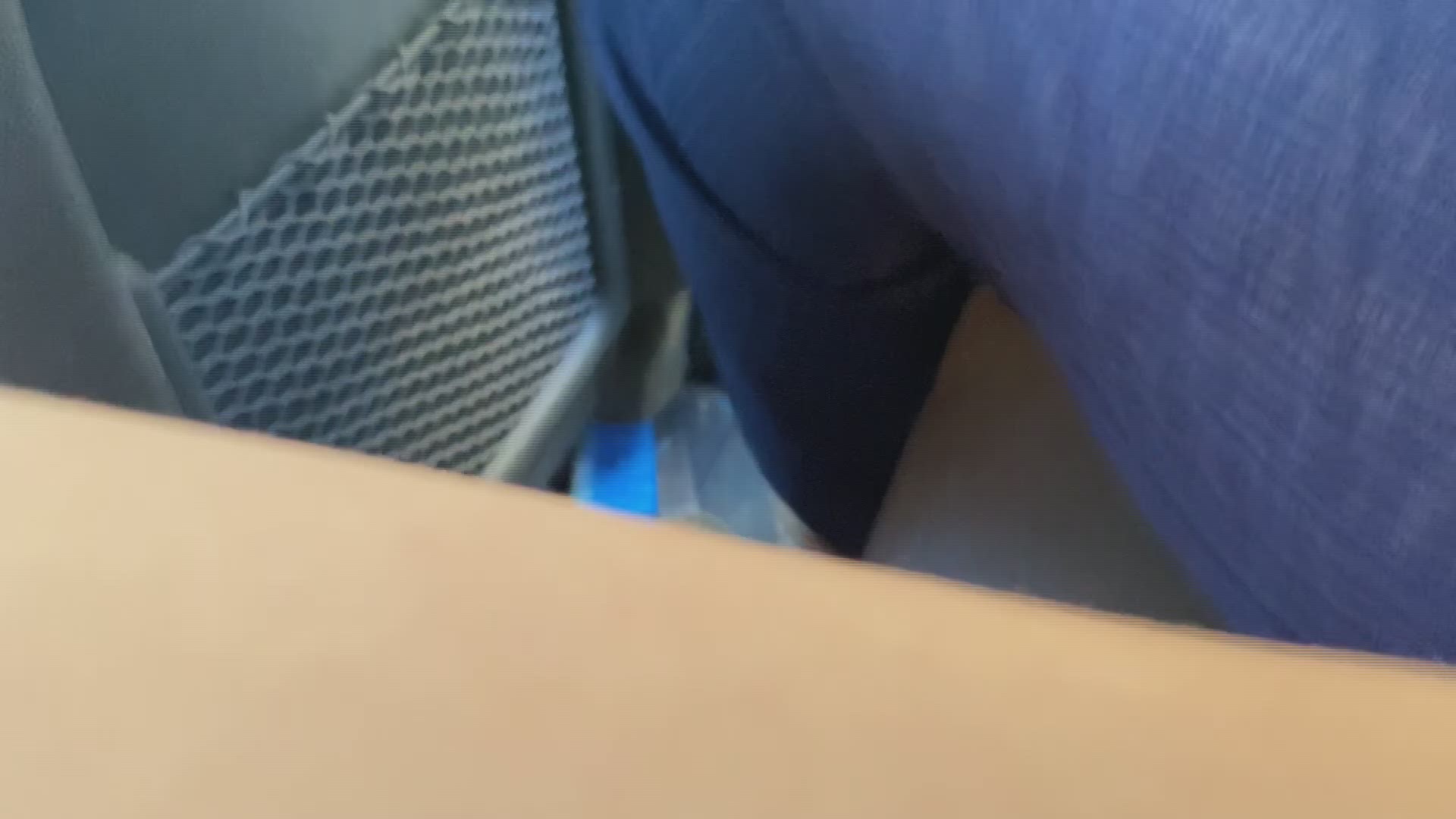 As the car carrying Brooke pulled up, she got out and saw Darth Vader walking toward her. He handed her a rose, grabbed her arm, and began escorting her past the Marriott and toward the bridge.

Credit: Colin Wever
Brooke Seymour was escorted onto the Blue Bridge in Grand Rapids, Mi., to the spot where her boyfriend Colin Wever was waiting to propose to her.

As Vader and Brooke started on the bridge, the 18 costumed Star Wars characters were in two separate lines, flanking Colin, who was smiling and prominently positioned in the middle.

Once Brooke reached Colin, the characters all turned to face them and witness the moment.

"I have been waiting for this day for a long time," Colin told Brooke, whose eyes began welling up with tears. "Meeting you was the best thing that's ever happened to me."

Credit: WZZM
Colin Wever got down on one knee and asked Brooke Seymore to marry him. She said, "yes!"

Colin got down on one knee, pulled a red box out of his pocket which contained the ring, and said, "Brooke Seymour, will you marry me?"

The couple embraced and shared a kiss.

Then Colin said to her, "I've got one more surprise for you."

The Stormtrooper costumer standing closest to the newly engaged geeks, took his helmet off, revealing himself.

It was Brooke's father, Kevin Seymour.

After all, what good Star Wars story doesn't have a reveal of who someone's father is.

"I was wowed," Brooke said afterwards. "I saw Darth Vader coming up to me and I was like, wow, Darth Vader.

"But then i was like, 'wait a second. He has a rose.' Then I saw everyone, and was like, there's no better way you could have asked me."

Credit: Colin Wever
After the engagement, Colin Wever and Brooke Seymour got a group photo with Star Wars characters who helped make the moment memorable.

For Colin, he was happy he pulled it off an kept it a secret from Brooke who, admittedly claims to rarely get duped.

"There was no other way I could have pictured this happening unless we had the cast from Star Wars here, like Mark Hamill and Harrison Ford," Colin said.

Credit: Colin Wever
In August, Colin Wever and Brooke Seymour are moving to Florida, where they both have applied for jobs working at Disney.

In August, Colin and Brooke, who do a weekly Star Wars podcast, say they plan to move to Florida, where they both have applied for new jobs at a place that's perfect for a pair of Star Wars fanatics. 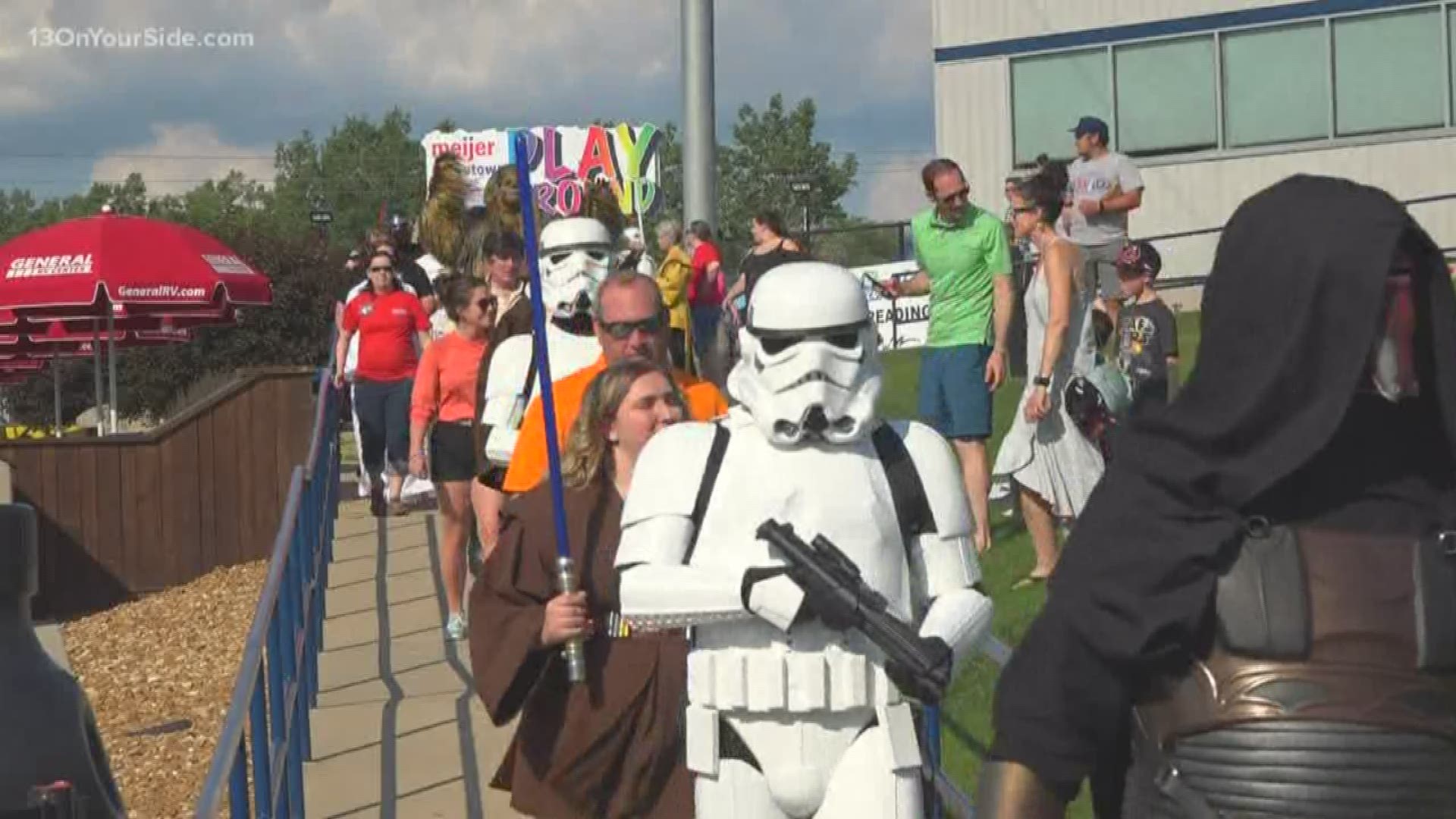