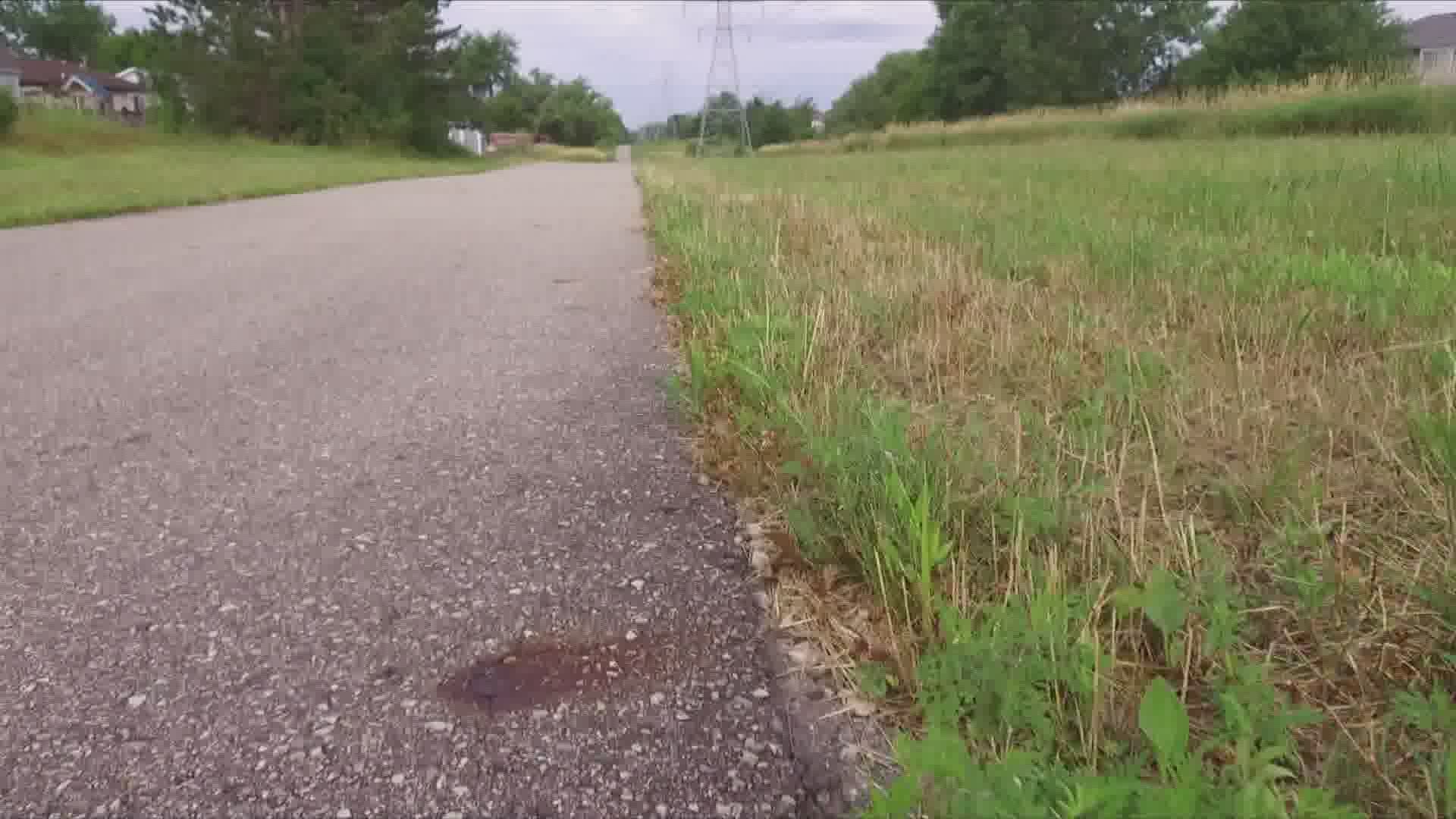 KENTWOOD, Mich. — Imagine one second you're out exercising, full of life, enjoying a brisk walk along a nearby path. The next second — blackness.

You're on the ground, life is leaving you and time is not on your side.

A West Michigan man becomes Michigan's first COVID-19 patient to undergo open heart surgery, after a pair of off-duty nurses happened upon him and saved his life along a path in Kentwood.

That's why he approached May 31 like it was any other day.

"My wife left early that morning to play golf with some friends so I decided to go for a walk," Matt said.

It was a Sunday morning. He remembers leaving his house and going to the East West Trail, which is a narrow, 2.7 mile trek, connecting Breton Road. SE to Stauffer Avenue. SE.

"I decided to take a little different route that day, " Matt said. "I was doing fine walking and had a good pace.

Matt collapsed and went face-first into the pavement.

He'd suffered a sudden heart attack, with seemingly nobody was around to help him.

The location where Matt went down happened to be in the direct sight-line of a home along the path.

"My oldest son was on the back porch and happened to be looking at the trail and saw a person laying there," said Kim Texley-Quigg, who owns the home on the trail. "I jumped out of bed, ran through the house, down the back steps, then through the field until I got to him."

Kim knew exactly what to do. She's a nurse of 42 years, including the last 37 as a nurse practitioner at Spectrum Health in Grand Rapids.

"When I got there, he was unresponsive," Kim said."I checked for a pulse, no pulse."

She then tried to turn Matt over to get him on his back when she saw a jogger running toward her on the path.

The jogger approached the scene, knelt down next to Kim, and shockingly also knew right away what to do.

"I helped get Kim get him rolled over and we immediately started CPR," said Brett Anderson, who also happens to be a nurse, practicing at St. Mary's Hospital in Grand Rapids.

"Without saying a word, we were teammates," said Kim, regarding the life-saving efforts she and Brett were performing. "Brett did compressions while I kept [Matt's] airway open."

Brett saw Matt's cell phone laying on the ground. He saw that it wasn't locked, so he called one of the most recent numbers, which happened to belong to Matt's daughter. Brett told her what was happening.

Once first responders arrived, Matt was loaded into the ambulance while emergency medical technicians continued CPR while transporting him to Spectrum Health Butterworth Hospital.

Matt still had no pulse when he arrived at the hospital, but a team of doctors continued to do all they could to revive him.

"From the minute he showed up in the ER, we said, 'No way,'" said Dr. Charles Willekes, who was Matt's cardiothoracic surgeon at Spectrum Health. "We gave him up for dead."

By the time Matt's wife, Dorine, and a few other family members arrived at the hospital, he'd been down close to 60 minutes with no pulse.

"It didn't seem real," said Dorine. "I honestly didn't think I would ever have a conversation with him again."

By the time continuous CPR on Matt had reached 80 minutes, the team of doctors were ready to stop.

"80 minutes of CPR may be the longest I've ever heard of," said Dr. Willekes. "Because he has so much prolonged CPR, we know that 99% of those patients are brain dead."

Before the medical team completely stopped trying to revive Matt, his wife wanted to be with him.

"That's when I asked, 'Can my daughter and I please go up and talk to him before you stop,'" said Dorine. "I told him, 'There's a lot of people in this world that really need you right now, and that Heaven can wait.'"

Literally a few seconds after Dorine spoke to Matt, there was a pulse.

Matt was back. He was unconscious, but he was breathing and his heart was beating.

Once the medical team got him stabilized, they began running tests.

"The ER doctor came back and told us he was COVID-19 positive," said Dorine. "They said he also needed heart surgery."

Dr. Willekes' surgical team had to follow strict protocols, knowing they were about to perform a procedure on a patient with COVID-19.

"I asked for volunteers, knowing the risks involved," said Dr. Willekes. "We had to do it because his anatomy was so critical.

"They didn't even dare to take the breathing tube out and fully wake him for fear of stressing his heart."

"I called a couple friends of mine who are surgeons in different spots and they hadn't heard of anybody doing heart surgery on somebody with coronavirus," added Dr. Willekes.

Matt regained consciousness a few days later, but had no memory of what had happened.

"Somebody was looking out for me up there," Matt said, pointing to the sky. "Right people at the right time. What are the odds?"

Matt's team of physicians at Spectrum Health were dumbfounded by his recovery.

After 19 days, Matt was discharged from Spectrum Health Butterworth. He was admitted to Mary Free Bed Rehabilitation Hospital, which is also in downtown Grand Rapids.

"A cat has 9 lives," said Dr. Sam Ho, who was Matt's primary rehabilitation  physician at Mary Free Bed. "I think he used a few of them with this health episode.

"He had cardiac arrhythmia; he had COVID-19; he had open heart surgery; his kidneys failed and he had to go on dialysis.

"How the heck do you survive all that? In my 46 years of medicine, I've never had a conversation with somebody who endured 80 minutes of CPR, but now I can say I have done that."

During his stay at Mary Free Bed, the two nurses who saved him on the path wanted to pay him a visit.

Credit: Dorine Cass
While he was recovering at Mary Free Bed Rehabilitation Hospital, Matt Cass was visited by Brett Anderson, one of the nurses who saved his life.

"We didn't have a good first meeting the first time we met," Brett Anderson said. "What makes this story even more miraculous is that when I go jogging, I normally never go down that path.

"Something compelled me to run down that path that day."

Credit: Dorine Cass
Kim Texley-Quigg, one of the nurses who saved Matt Cass' life on the path, visited him when he was recovering at Mary Free Bed Hospital.

When Kim met Matt, she told him that she was only home that morning because she was watching virtual church on her computer.

"The first thing I told him, I said, 'Well, how does it feel to be a miracle, because you're a miracle in my eyes,'" said Kim. "This doesn't happen; this isn't supposed to happen; this man should not have survived."

Kim, who lost her husband to a heart attack, says the initial CPR she and Brett did on the path for Matt kept oxygen and blood going to his brain and saved his neurological functions.

"He's got some short-term memory loss, but he remembers everything before the incident," said Kim. "God put us all in the places we needed to be on that day." 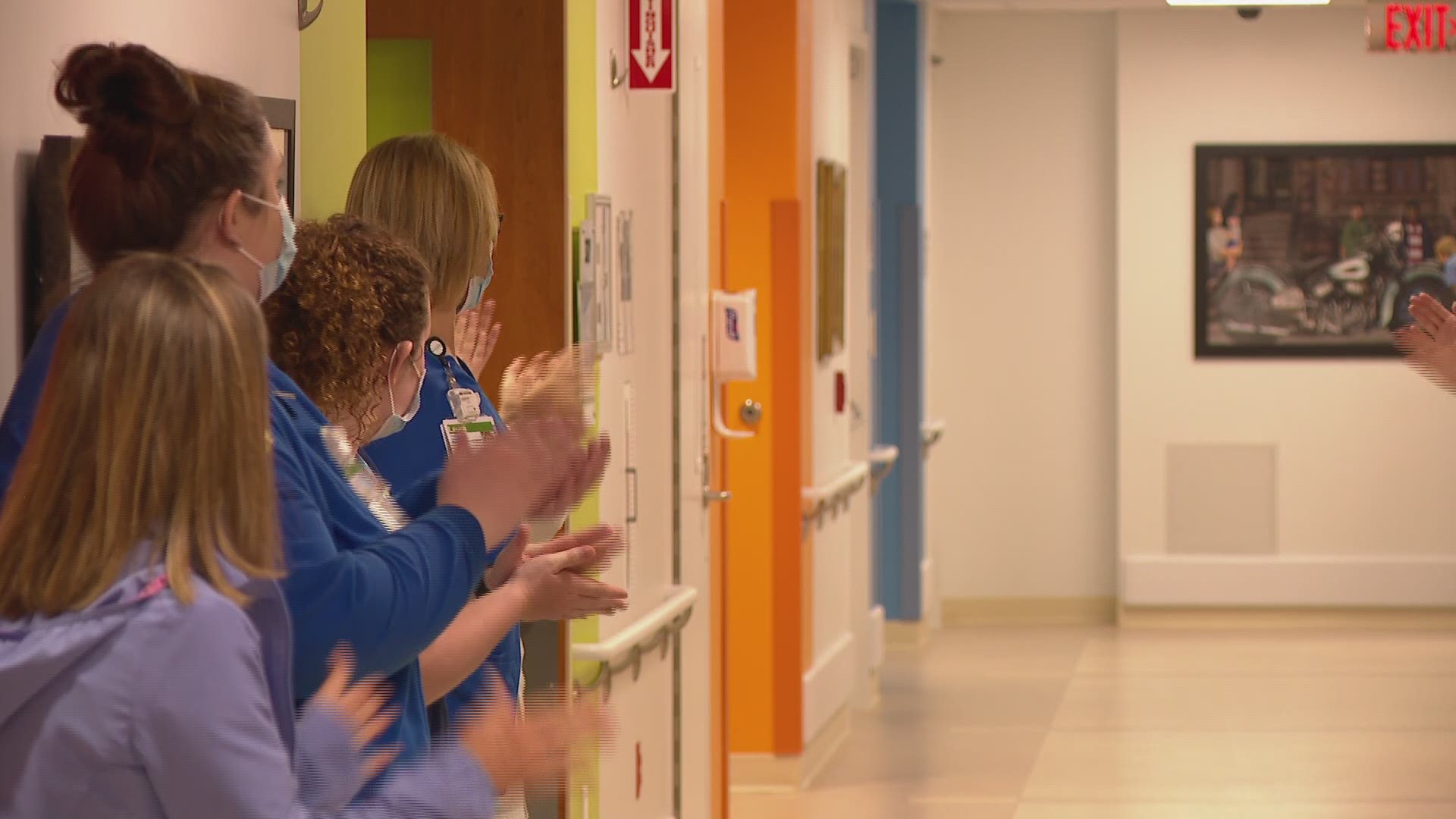 Matt was discharged from Mary Free Bed Hospital and went home on July 2. Doctors say he'll have to continue outpatient rehabilitation for a while, but he's expected to make a full recovery.

"Thank God that somebody sitting on a back deck saw me go down," Matt said. "They saved me."

If you have a story that you think should be featured on "Our Michigan Life," email Brent Ashcroft: life@13onyourside.com.