Hudson American Legion post officials purposely muted the microphone of a veteran during his speech on Memorial Day. 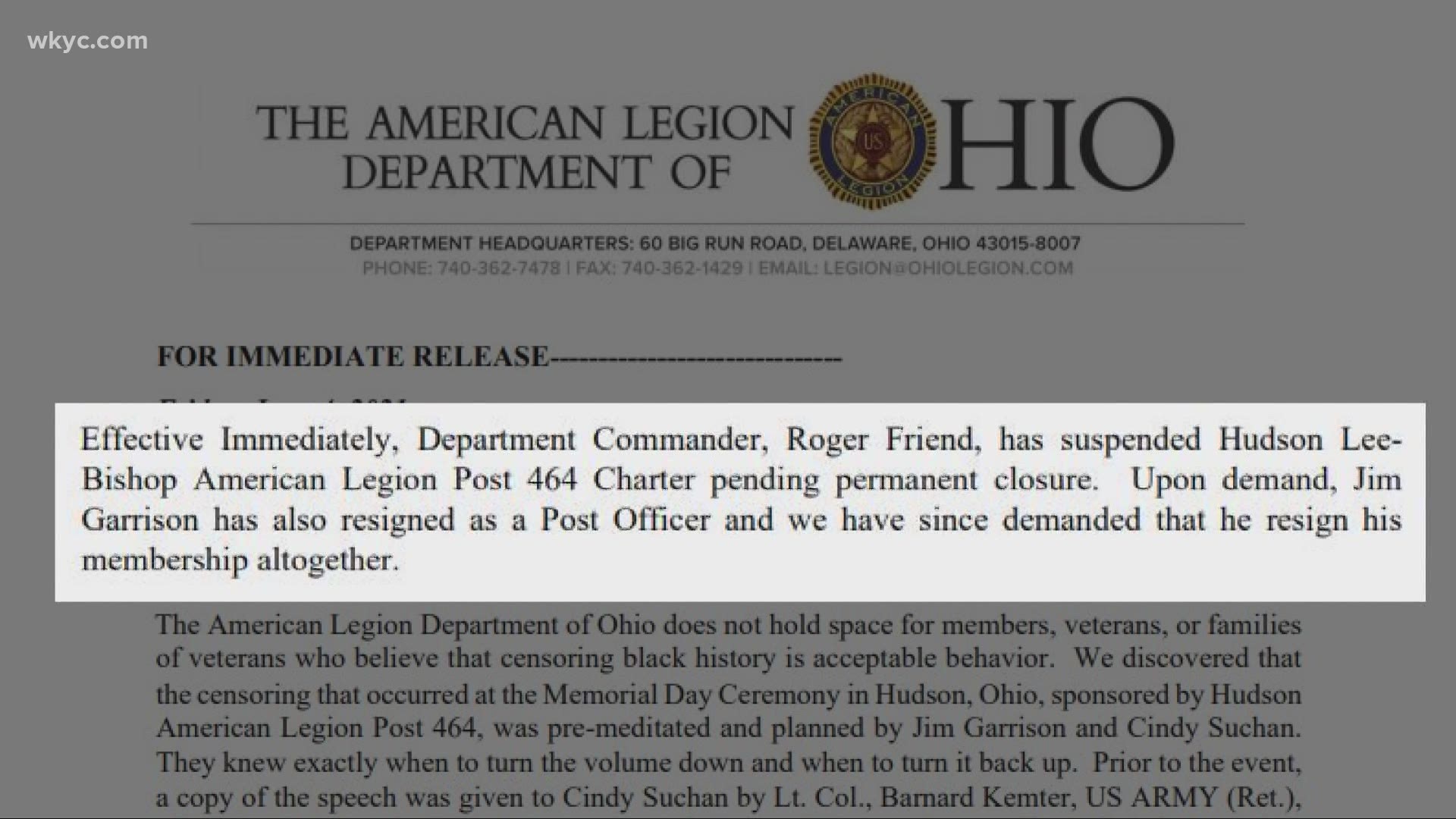 HUDSON, Ohio — Editor's Note: The above video is from our previous reporting on this story

The Hudson American Legion post has had its charter suspended and one of its top officers has stepped down after a Memorial Day controversy in which a speaker’s microphone was muted when the former U.S. Army officer began talking about how freed Black slaves had honored fallen soldiers soon after the Civil War.

Retired Army Lt. Col. Barnard Kemter told 3News he thought it was an audio glitch at first, but it was no glitch at all. His microphone was purposely muted for several minutes.

But organizers of the ceremony said that part of the speech was not relevant to the program’s theme of honoring the city's veterans. Cindy Suchan, chair of the Memorial Day parade committee and president of the Hudson American Legion Auxiliary, says it was either her or Jim Garrison, adjutant of the American Legion Post 464, who turned down the audio.

Walker is a former member of Post 464 and participated in the Memorial Day observance put on by the chapter last year. He says he was sick to his stomach when he heard what happened.

"It sometimes seems there's an aversion to discuss race at all," he explained. "It could be because of racism, it could be because people are uncomfortable, but for military members and Legion members, we're supposed to lean forward."

On Friday, Ohio American Legion officials announced Garrison has resigned as a Post Officer and that they also "demanded that he resign his membership altogether." You can read the entire statement below:

In the days before the ceremony, Suchan said she reviewed the speech and asked Kemter to remove certain portions. Kemter said he didn’t see the suggested changes in time to rewrite the speech and talked with a Hudson public official who told him not to change it.

You can see the incident in the player below:

Walker says while this censoring doesn't reflect the many members of that post, he respects the decision made by Ohio's commander to oust Garrison and shut the chapter down.

"Part of being a military member is you take responsibility," he said. "Somebody in the group does something wrong, you have to own it. Sometimes you have to take extreme ownership of it and I think this is an example of that."

"The American Legion Department of Ohio does not hold space for members, veterans, or families of veterans who believe that censoring black history is acceptable behavior. We discovered that the censoring that occurred at the Memorial Day Ceremony in Hudson, Ohio, sponsored by Hudson American Legion Post 464, was pre-meditated and planned by Jim Garrison and Cindy Suchan. They knew exactly when to turn the volume down and when to turn it back up. These actions of Post 464, through its authorized representatives or officers in attempting to censor or suppress that portion of LTC Kemters’ speech and effectively doing so by reducing the speaker system volume, constitutes a violation of the ideals and purposes of the American Legion."

City leaders in Hudson also reacted to the Memorial Day incident. In a joint letter, Mayor Craig Shubert and Hudson City Council "condemned" the move by the local American Legion to "censor the comments of Lt. Col. Kemter."

"To discover later that this was an intentional cut of audio was a travesty on so many levels," Shubert told 3News. "It truly disrespected a decorated military officer, it diminished the story of the African American slaves who contributed to the first Memorial Day, and thirdly those who were in attendance did not have an opportunity to hear the full story and the meaning behind it."

Mayor Shubert says that he spoke with all parties afterwards. Suchan explained she asked Kemter several times to remove the section of the speech due to several recent racial concerns in Hudson, one involving a school board meeting and another regarding video games. Suchan told Shubert she didn’t think it was appropriate and wanted to keep the event focused on Hudson veterans.

"This is the action of two individuals, this is not an indication of who or what Hudson is about," added Shubert. "While this is a teachable moment for a lot of folks, this cannot be the stain that remains on our city. We must continue to move forward and to embrace people of all races and nationalities and to continue to teach and learn from this."

Kemter said he was disappointed that the organizers silenced two minutes of his 11-minute speech, during which he talked about how former slaves and freed Black men exhumed the remains of more than 200 Union soldiers from a mass grave in Charleston, South Carolina, and gave them a proper burial.

"This is not the same country I fought for," Kemter, who spent 30 years in the Army and served in the Persian Gulf War, lamented.

Walker says he suspects some of the Hudson Legion members may join other nearby posts, while others may wait and see what happens. He wasn't sure he'd rejoin that post after moving to Twinsburg, but decided not to after the incident. He says this couldn't be further from what the American Legion stands for.

"It disgusts me that this happened," he opined. "It puts the Legion in a bad light, it put the city of Hudson in a bad light. The rest of the group should take the opportunity to lean forward and prove to the community that we’re not all like that."