Mega-project The District gets back on track in downtown Jacksonville

"From a downtown perspective of what that development would mean, it's a huge project. It's going to be almost like building a little community within our downtown." 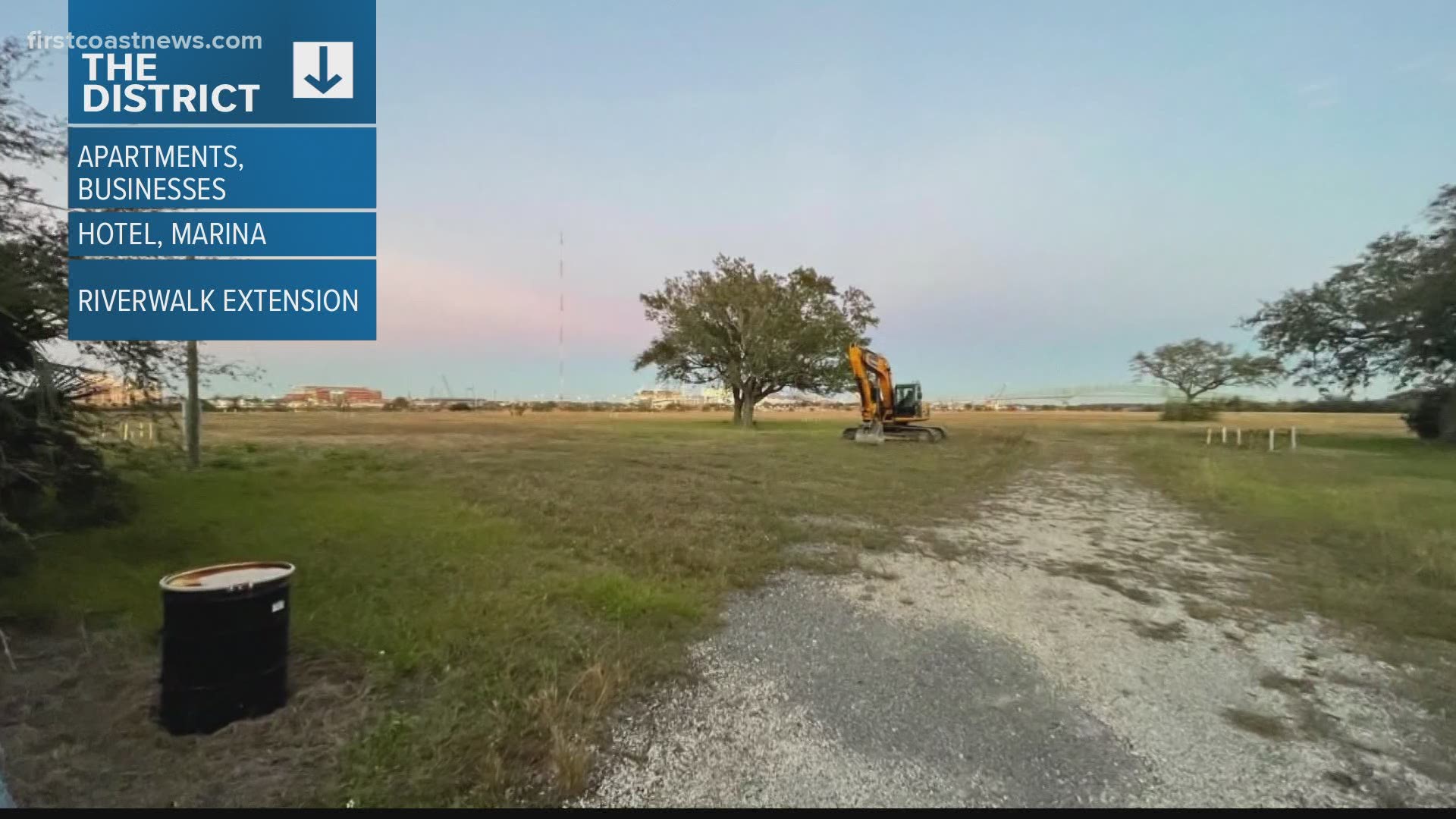 JACKSONVILLE, Fla. — After slogging through the COVID-19 pandemic, the outlook for downtown Jacksonville could end 2020 on a sweeter note as the mega-development called The District picks up steam in finalizing financing that would enable long-awaited construction to start in 2021.

The proposed development, which has been in the works for years without any ground-breaking, got a second wind in September after Dallas-based Preston Hollow Capital took the lead role in turning a 32-acre vacant tract of land into 950 residences along with a hotel, several hundred thousand square feet of office and retail space, and a marina.

The city granted a year's worth of extensions that pushed the deadline to the end of December for closing on privately financed bonds that will get the first phase of construction under way.

That closing is scheduled for Tuesday on a $32 million bond package, which would clear the way for the city to release its own share of taxpayer dollars to get construction started.

"From a downtown perspective of what that development would mean, it's a huge project," said Jake Gordon, CEO of Downtown Vision, a nonprofit that represents downtown property-owners. "It's going to be almost like building a little community within our downtown."

The first phase of construction on the Southbank riverfront land will entail building the streets, drainage, utilities and other in-ground infrastructure.

City Council approved a redevelopment agreement in June 2018 for the city to spend up to $26.4 million for public improvements such as a riverfront park, river walk extension, shoreline bulkheads, and roads at the site.

The city's contribution was in a holding pattern, however, until the developer moved forward with issuing bonds for infrastructure geared toward the private portion of the development.

The original deadline for closing on the bonds was Jan. 13, 2020. The Downtown Investment Authority, which oversees development for the city of Jacksonville, extended that deadline several times to give more time for lining up the private financing.

The board for The District Community Development District, which is a quasi-governmental entity, voted Dec. 14 to issue nearly $32.2 million in bonds. The buyer of the bonds will be Preston Hollow Capital, according to the presentation at the board meeting.

Community development districts are regulated by state law and have been widely used in residential suburban developments in Northeast Florida. The District Community Development District has its own board, and the city is not liable for the debt issued by the district.

After the happens, Elements Development of Jacksonville, which owns the land, will convey a portion of the riverfront property to the city for the planned park and river walk extension.

Boyer said that before the end of February, "all permits must be in hand, and we are on track for that." She said construction would start by the end of March.

The development deal approved by City Council in 2018 also authorized up to $56 million in property tax rebates. Those rebates would take place over about 20 years on 75 percent of new city property taxes generated by the value of new construction on the site.

The financing plan for the bonds issued by The District Community Development District anticipates that the property tax rebates will be enough to pay off the debt, provided the project is fully developed.

The city approved the development deal with land-owner Elements Development of Jacksonville, which purchased the property from JEA after the city-owned utility demolished an electric generating station that had stood on it.

By purchasing the bonds issued by The District Community Development District, Preston Hollow will more than double its financial stake in the project.

Elements Development announced in September that Preston Hollow would be assuming all the rights and entitlements allowed under the redevelopment agreement with the city.

COVID-19 slowed everything down

Gordon, the Downtown Vision CEO, said development investment in downtown "was doing unbelievably well" before the pandemic hit. The pandemic caused a steep drop in foot traffic in downtown, putting a squeeze on stores and restaurants.

He said it's encouraging to see The District is moving forward because those big projects combined with small projects are how other cities worked for years on downtown development before gaining national attention.

"These huge projects take a really long time, but when the ball starts rolling downhill and you really see it, it starts to catch fire," he said. "There are years and years of hard work that have to precede that."