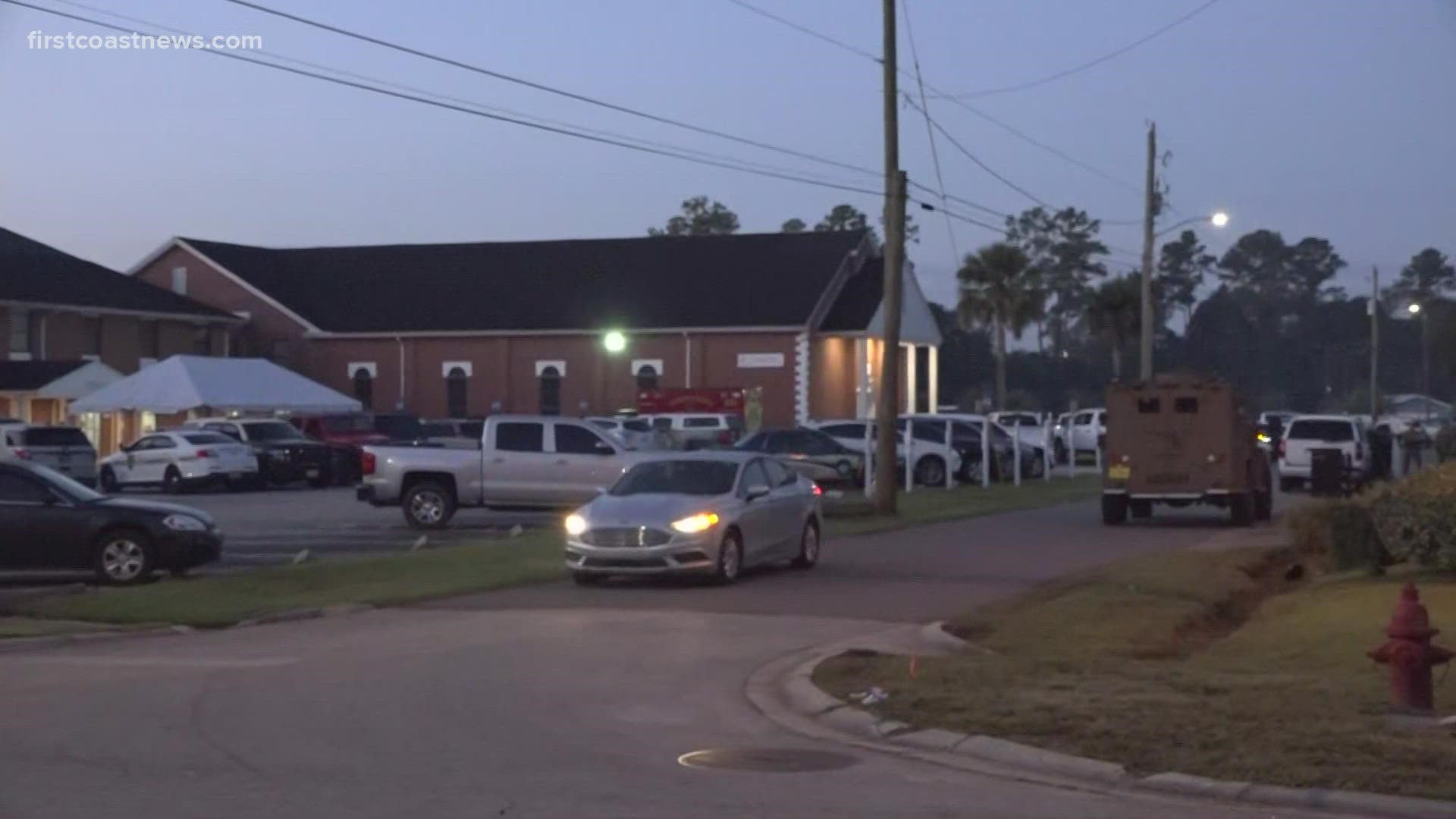 Deputy Joshua Moyers, 29, was shot twice during a traffic stop in the pre-dawn hours of Friday. He died Sunday afternoon from his injuries.

Authorities believe McDowell, a 35-year-old former Marine from Jacksonville, is responsible for shooting Moyers. He is still on the run and is considered to be armed and dangerous.

On Sunday evening, the sheriff's office sent out the following message to residents. “Tomorrow around 6 a.m. there will be a heavy police presence in the Sandy Ford Road at US-301 area of Callahan. You may see about 200 vehicles and deputies in the area. Do not be alarmed. We are collecting evidence. We don’t know how long this will take. Thank you for your patience.”

First Coast Crimestoppers is offering a $50,500 reward for any information that leads to McDowell's arrest. You can call Crimestoppers anonymously at 1-866-845-TIPS.

Earlier on Sunday, the Florida Department of Law Enforcement issued a Florida Blue Alert to help spread the word across the state in the search for McDowell.

A Florida BLUE Alert has been issued out of Nassau County for Patrick McDowell last seen in Callahan. Do Not Approach! Call 911 or Nassau County Sheriff's Office at 904-225-5174 pic.twitter.com/cVcjm2iSrR

"It's just senseless," Sheriff Bill Leeper said Saturday. "What he did to that deputy is uncalled for and unnecessary, and he needs to pay for it."

Before sunrise on Sunday, hundreds of law enforcement personnel from around the area came to assist in the search.

Some of the agencies spotted by a First Coast News crew just outside the search area are:

"We're still searching the same area we were [Friday]. It's about a five square-mile area, over 3,000 acres. It's a large area," Leeper said Saturday. "Over 300 [personnel] searching the area."

Within that area are homes, hunting camps and woods, the sheriff stated.

In addition to personnel, authorities are using a wide variety of other methods to find McDowell, including drones, helicopters, ATVs and K-9 units.

"Anything you can imagine, we're utilizing to help find this guy."

In the overnight hours of Friday into Saturday morning, investigators found some evidence that may have been left behind by McDowell, including a flashlight and a hat.

On Sunday, the Nassau County Sheriff's Office released pictures of McDowell, including pictures of two of his tattoos.

We’ve had several people asking about tattoos… these are Patrick McDowell’s tattoos. Thank you for your help and support. Also including another shot of his face to keep that circulating.#findMcDowell pic.twitter.com/k8wtgmVPYm

SWAT units were going door-to-door Saturday morning talking to residents to make sure McDowell was not holed up inside a home or holding anyone hostage, according to the Nassau County Sheriff's Office.

"We just wanted to knock on every door and make sure the people who live there are safe, see if they have seen anything," Leeper explained. "If they need anything, let us know. If they see anything suspicious, let us know."

So far, there have not been any confirmed sightings or encounters with McDowell since the sheriff's office said he shot a K-9 officer Friday.

The sheriff issued a stern warning to anyone who may be harboring McDowell that they will face charges.

"If we find out you helped this guy, we're going to arrest you," Leeper said pointing at cameras during his press conference. "This guy is dangerous."

Sheriff Leeper also had blunt advice to anyone who may encounter McDowell.

"If you're in a home, and he breaks in your home and you have a gun, blow him out the door," Leeper said. "Because he's like a rabid animal. He will kill you."

BACKGROUND: The shooting happened following a traffic stop around 2:30 a.m. near Mickler Street in the Callahan area of US 301, the sheriff's office said Friday.

During the incident, Moyers got out of his patrol car and approached the vehicle which was driven by a man, believed to be McDowell, with a woman in the passenger seat, the sheriff's office stated.

While attempting to get information from the driver, Moyers learned that he did not have a driver's license, and the tags on the vehicle were registered to a vehicle that was stolen in Jacksonville, Sheriff Bill Leeper said.

Moyers asked the driver if he had any weapons and asked him to step out of the vehicle, Leeper said. Moyers then grabbed the handle of the suspect's vehicle to open the door as a train approached the nearby crossing.

The driver’s arm then came out of the window and shot the deputy in the face near his eye and in his back, Leeper said. After the shooting, the suspect sped off through the railroad crossing.

Another deputy who was coming to assist arrived on the scene and found Moyers on the ground. First responders rushed to the Moyers to a Jacksonville hospital where he is in critical condition.

Investigators located the female passenger and placed her in custody before interviewing her.

The woman said she told the driver that “she didn’t want any part of it,” according to Leeper. She left the driver, called 911 and identified the shooter as Patrick McDowell.

Tracking dogs were brought to the scene to search for McDowell. During the search, McDowell shot a Jacksonville Sheriff's Office K9 with a rifle, Leeper said. That rifle was later found by officers nearby. The K9 was taken to the veterinarian and is expected to be OK, Leeper said.

He also has a history of arrests for multiple charges including possession of cocaine, burglary, giving a false name to law enforcement and aggravated possession of stolen firearms

McDowell was last seen in the area of US 301 and Sandy Ford Road, deputies said.

Deputy Josh Moyers remains in critical condition tonight at UF Health after being shot in the face and back.@RobertBReports & I spoke to a neighbor of Moyers who said he’s prayed with him before, and is certainly praying for Moyers and his family tonight. More on @FCN2go at 11 pic.twitter.com/JR2aFeOU8I