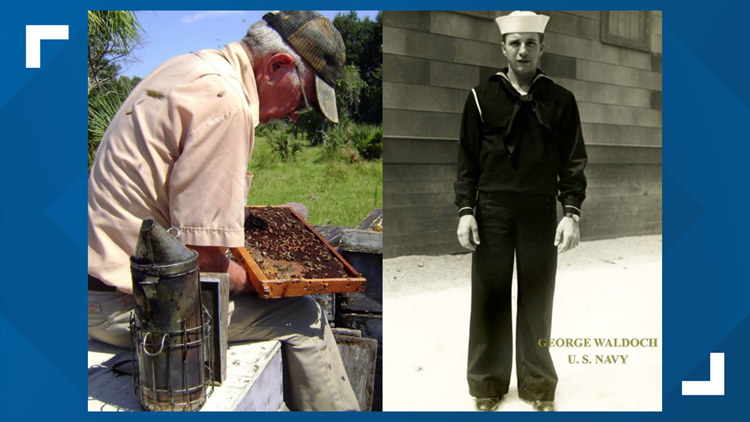 He was known simply as the 'honey man' to people living in Mandarin.

And his legacy is just as sweet.

George Waldoch passed away on Tuesday at the age of 99, just one day shy of his 100th birthday.  He was born in 1919 and was 20 years old when World War II began.

According to the Mandarin Museum & Historical Society, George did many things in his long life but his service to our country during World War II was an achievement he was exceptionally proud of.

The museum says they had plans to honor him at their 20th Annual Winter Celebration on Dec. 7 during a special program that day for six World War II veterans.

"We will still honor him of course, and boy will we miss him," says the Mandarin Museum.

After serving in the Navy, Waldoch married and began working with bees. At one point, he was tending to about 100 hives on farms in the Jacksonville area, writes Forest Lake Times.

Honey from the bees was sold from a tiny roadside stand at his home along State Road 13 which helped him coin the nickname as the 'Honey Man.'

All of George's sales were on the honor system.

"George was well-known and respected as an expert beekeeper and trained hundreds of people over the years," says the Mandarin Museum. "He received many honors and everybody in the area that was interested in beekeeping knew and loved him."

According to the Crescent Beach Ladies’ Beekeeping Collective, Waldoch was easily Florida’s oldest and most illustrious beekeeper.

"We are thankful that Mr. Waldoch chose to live in Mandarin after his service in the Navy was over - for the majority of his 100 years on this earth," writes the Mandarin Museum.

"He leaves a huge footprint. Our condolences to the Waldoch family and his many friends"