Emails obtained by 10 Tampa Bay show Vanessa Baugh asked for herself and four others to be able to get vaccinated at the controversial Lakewood Ranch site. 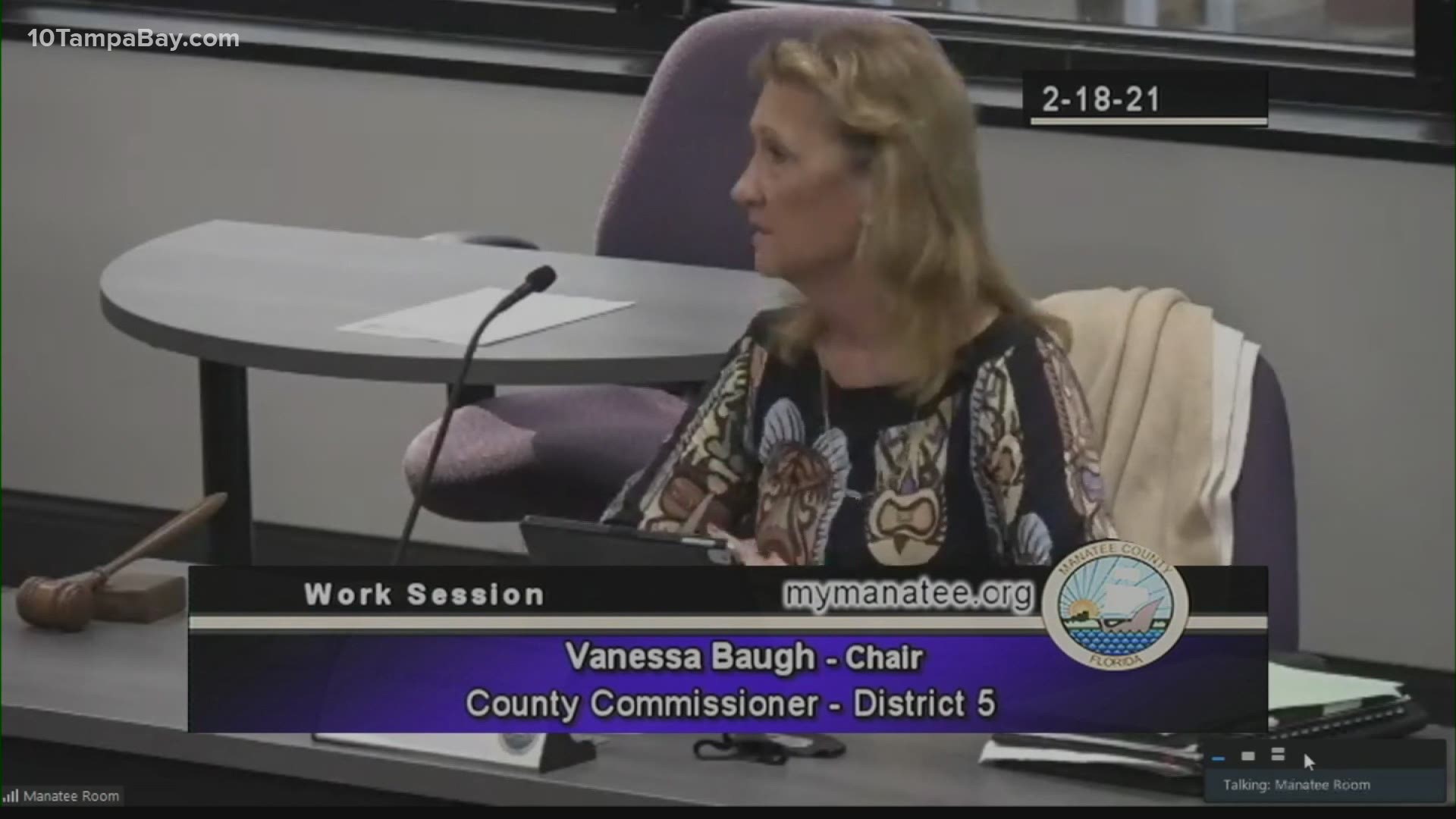 MANATEE COUNTY, Fla. — “For my part and my misconceptions, I am truly sorry.”

Those are the words of Manatee County Commission Chair Vanessa Baugh one day after emails showed she asked for her name and four others to be added to the vaccination list at the controversial Lakewood Ranch pop-up site.

“I want to apologize to all the residents who I have disappointed in any action that I’ve taken according to some news outlets," Baugh added.

The commissioner made headlines when she admitted to handpicking the 3,000 appointments for those who live in the site's neighboring two zip codes: 34202 and 34211. This strays from the use of the county's lottery system for random selection.

It's another decision she apologized for Thursday.

“This is not for the board this is for the citizens of Manatee County and what all they’re going through right now and the part that I played in that, as well as others," Baugh said, adding that she loves the county and will continue to do what's best for its residents.

Baugh said she was hurt to see the county being torn apart by politics and argued it wasn't entirely accurate to use the term "VIP list" when it comes to her request for vaccination slots for herself and others. Those other individuals included Schroeder-Manatee Ranch President and CEO Rex Jensen, and Lawrence Jensen, who do not live in the designated zip codes – along with Robert and Marie Keehn, who live near Baugh.

"Trust me that’s not what it was meant to be at all, and I think it will be interesting to see how this email even got out in the first place because it had information on it that was not and should not have been shared," she said.

During her apology Baugh, on several occasions, noted her responsibility and the impact it carried.

“It is true that I sent the email to the public safety director because I wanted to make sure that certain people were on the list. I did," she said. Later adding, "it all starts with me. I’ll take responsibility for that too. I’m good with it.”

As for the others on the list? Baugh wishes some privacy could be given to them. The commissioner said she spoke to Rex Jensen who was upset about his personal information getting out. Baugh said the couple on the list had a similar reaction.

In the end, Baugh says she did not receive a vaccine and doubled down on the decision to bring the pop-up site to Lakewood Ranch.

“I did exactly what [Gov. DeSantis] wanted and I’m thankful for that. I am thankful and appreciate the governor that he brought 3,000 additional doses of vaccine this county.”

Baugh said she stands by the governor.

"Thank the governor for doing what he did. Don’t condemn him,” Baugh said.

The choice to place one of the state-run pod vaccinations sites in one of the county's wealthier communities is something Gov. DeSantis faced scrutiny for the last few days.

When asked Thursday about the "VIP list," his response was short.

"You should ask them," he said before reiterating that the vaccine doses doled out at the pop-up site are separate supplemental doses from the 6,000 the county sees weekly.

Following Baugh's apology, others on the board were able to respond. Most thanked the commission chair for her apology and acknowledged that there was "favoritism" and a "lack of judgment" on her part.

But now all they say they can do is move forward.

To start, County Administrator Cheri Coryea says the county received a call Thursday morning, and another 200 vaccines are being sent to the Lakewood Ranch. And this time, all slots will be filled through a random pull from the county's pre-set lottery system.

You can watch the entire commissioner workshop meeting below.