Michael Costa is charged with making threats, disorderly intoxication, battery on an officer and resisting arrest without violence connected to Friday's incident. 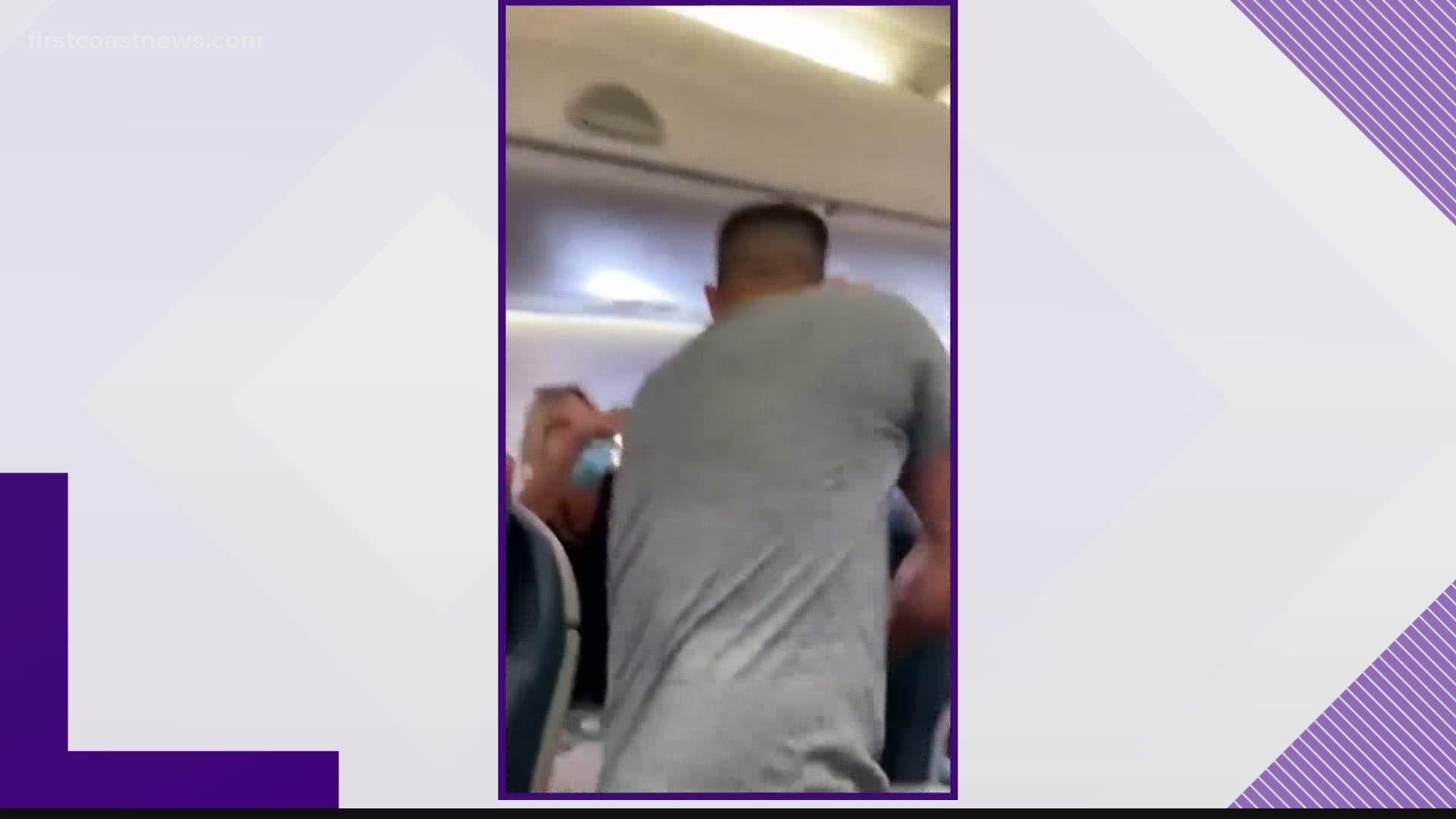 JACKSONVILLE, Fla. — The man charged with making threats, disorderly intoxication, battery on a law enforcement officer and resisting arrest after an incident aboard a plane Friday wants to share his side of the story.

Michael Costa told First Coast News in a nearly 30 minute phone conversation Monday video of the incident only shows part of what happened. He bonded out of the Duval County Jail early Sunday morning.

According to the police report, that video shows Costa approaching another passenger and punching him "several times" onboard the Delta flight at Jacksonville International Airport.

Costa is heard in the video saying to another passenger, "My wife and my daughter have an air pass to be on the seat."

According to Costa, who didn't want to go on camera, he was separated from his wife and his two-year-old daughter without an explanation onboard the Delta flight.

According to the arrest report, Costa's wife was brought back to the front desk to buy another ticket for their two-year-old instead of having her sit on their lap.

Costa said the plane started to leave without his wife and daughter on it. He said he asked a flight attendant what was going on. A stewardess, he said, told him the airline made a mistake and they were working to fix it, and that the plane would wait to leave until things were remedied. Costa said he apologized to everyone onboard the plane for the wait.

Tonight at 5:05 on @FCN2go: the man charged with making threats and battery on an officer at @JAXairport Friday, the man at the center of this video, shares his side of the story. https://t.co/sOHm1MCgJW

According to the arrest report, Costa "began loudly protesting their removal when another passenger told him to hurry up and just leave the plane." That's when Costa confronted the man and started punching him, the report states.

Costa told FCN the passenger cursed at him, saying that Costa was holding up the plane. Costa said his other daughter was a few rows behind that passenger and began to get upset. He maintains that what people saw on the 30 second video wasn't what really happened, and said no one saw what led up to it.

Costa said while he shouldn't have confronted the passenger, he said none of this would've happened if it wasn't for Delta's error. According to Costa, any parent would react the way he did to Delta if they didn't know where their child or spouse was.

When police arrested Costa, the report says he didn't want to comply at first, "flailing his arms" and pulled away. It says he then and sat down, which Costa admitted to doing. He said he was complying, but the handcuffs were too tight and said officers wouldn't loosen them.

When they got to the police car on the tarmac, the police report says Costa pulled away again and spat in one of the officer's faces. The report also said he threatened to kill the officer and his family.

When officers put Costa in the cruiser, the report says he "tried to push away and struck his forehead on the door jamb."

The other man in the video told First Coast News Monday his hand is swollen from the incident.

According to a Delta Airlines spokesperson, the airline is still deciding what repercussions Costa could face with the airline. A decision will be made after its investigation wraps up, but could amount to the airline banning Costa, or Costa getting put on the no-fly list all together, the spokesperson said.

The spokesperson wouldn't comment directly on what transpired on the plane, or answer if the airline employees made a mistake with the ticket like Costa said. He did say the incident delayed the flight to Boston about two and a half hours. The flight was operated by Republic Airlines, which Delta owns.

The FBI is also investigating for possible federal charges. When the incident happened, the door of the plane was closed and the plane was ready for pushback, the arrest report says.

According to the Federal Aviation Administration, since the start of 2021, airlines have reported about 2,900 incidents of unruly behavior by passengers. This is a drastic jump from the usual 100 to 150 reports each year, an FAA spokesperson said. 2021's numbers have already surpassed the past 10 years all together. Since 2011, there have been 1,420 reports, excluding 2021, according to FAA statistics. In 2020, there were 183 reports.

The spokesperson said about 2,200 reports are passengers refusing to wear a mask on planes. The mask mandate is a federal mandate required by the Transportation Security Administration.

“As a former airline captain, it’s extremely concerning to me, and I know it’s equally concerning to the airline cockpit and cabin crews whose primary responsibility is to ensure the safety of all passengers," Steve Dickson, FAA's Administrator, said about the rise in reports.

The agency now has a zero-tolerance approach to bad behavior. In response to what the FAA calls a "disturbing increase," Dickson signed an order in January directing stricter legal enforcement against unruly passengers.

“Flying is the safest mode of transportation and I signed this order to keep it that way,” Administrator Dickson said.

Unruly passengers could face criminal charges, fines or bans on airlines. The order will be in effect as long as the TSA mask requirement is in effect, the spokesperson said.

The Association of Flight Attendants-CWA's president, Sara Nelson issued the a statement in response to the rising number of unruly passenger reports. It reads in part:

"We've never before seen aggression and violence on our planes like we have in the past five months. Already, reports of these incidents in less than five months are more than 20 times the amount in a typical year. But these are just the incidents reported. The constant combative attitude over wearing masks is exhausting and sometimes horrific for the people who have been on the frontlines of this pandemic for over a year. The atmosphere is so bad it's causing Flight Attendants to quit the job they used to love ...

Flight Attendants are charged with the safety, health, and security of everyone in the cabin. Our instructions to the traveling public keep everyone safe. Everyone wants to have the freedom of flight. Listen up and do your part. We're truly all in this together."

The union represents about 50,000 flight attendants at 17 airlines.

Costa's first court appearance was this past weekend. A bond was set at $32,000. His next court date, an arraignment hearing, is set for June 28.