A local woman has opened a new thrift store with the goal of employing people with Autism and other developmental disabilities. 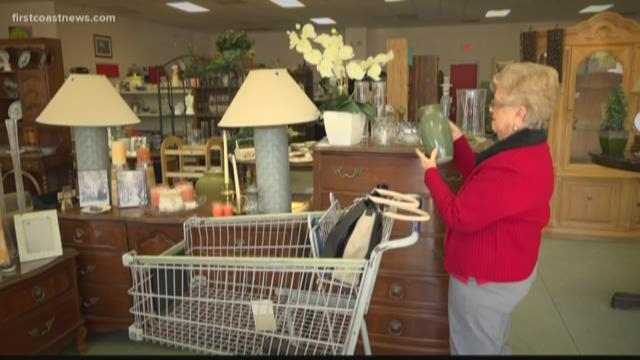 ST. JOHNS, Fla. - A local woman has opened a thrift store with the goal of employing people with Autism and other developmental delays.

Tillman initially got the idea for a thrift store to give opportunities to her 13-year-old son; she worried that he, like so many people with Autism, would have a hard time finding a job.

“I just wanted to be able to provide an opportunity in case no one else did for him,” Tillman said. “Your children talk of having a family and wanting kids and a home and … I just wanted that for my child.”

The store also collects delivery fees and donations in exchange for books, which are then donated to local schools with ESE programs.

Tillman started by selling donated items online and at garage sales, trying to save up enough money to eventually open the shop. But just two months later, the opportunity arose to buy the Red Door Thrift Store, a space much larger than initially expected.

Tillman and her husband took out $60,000 in loans to start up. And they haven’t looked back.

“I have not worried, not once, that ‘oh my God what have I done, this is crazy,’” Tillman said.

Working at the store will give teens and young adults the skills and confidence to make them marketable for future jobs, Tillman said. She said she’s already seen growth and progress in the first few volunteers to work in the store.

“It just inspires me that I got the job,” Ethan Anderson, 16, said.

Both Anderson and Ian McFather, 15, are students at Jacksonville’s Reach Academy.

McFather said his favorite thing to do at the store is tie the shoes.

“’Cause I’m good at tying shoes!” he said excitedly.

“Sorting the shirts and pants and skirts,” Anderson said of his duties around the store. “And putting the hangers in the right direction.”

Tillman said kids like Anderson and McFather are often misunderstood, but opportunities like this help them grow. For example, someone who feels uncomfortable or overwhelmed around other people may start out sorting and folding clothes in the back. Eventually, they could work their way out onto the sales floor.

Knowing she’s helping people like Ethan, Ian and her own son make everything worthwhile. Tillman also hopes it gets more people to interact with people with Autism and learn they’re more similar than they are different.

“Don’t judge a book by its cover,” she said. “They have their shortcomings just like you have yours. We all do. Just in different areas.”

The store is looking for donations of clothing, accessories, furniture (excluding mattresses), maternity and baby items (strollers, cribs, baby carriers, monitors, etc.). They are not in need of small toys at this time.

Spectrum Thrift Store is located at 616 State Road 13 in St. Johns, near Julington Creek. Anyone wishing to volunteer or potentially work at the store should stop by.

The store is open every day during the following hours: