This is the first death of this kind in Washington state and just the fourth confirmed nationwide. 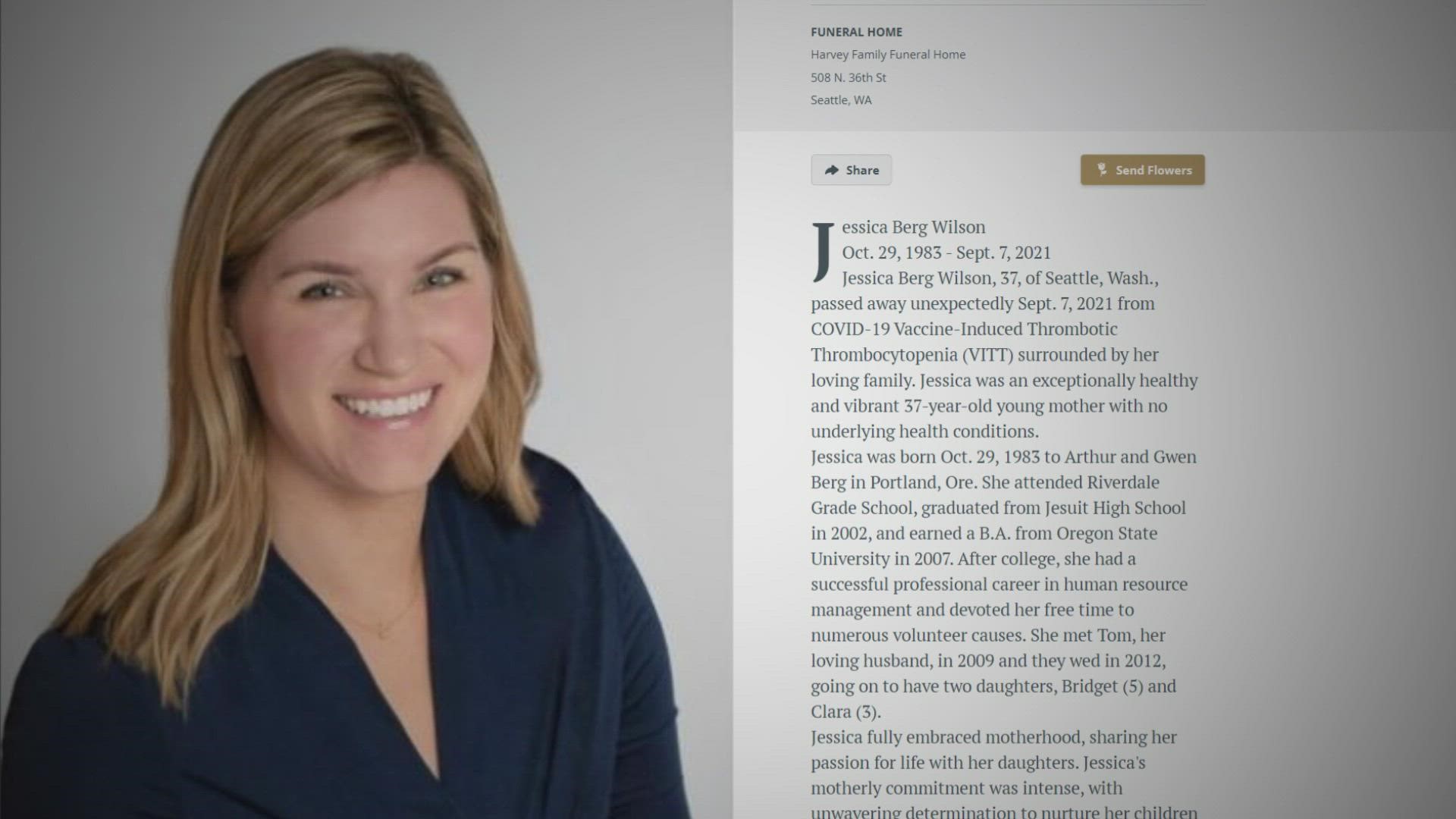 The health department said the woman in her 30s received a single dose of the J&J vaccine on Aug. 26, 2021. She died less than two weeks later on Sept. 7.

According to the U.S. Centers for Disease Control and Prevention (CDC), there have been three other confirmed deaths nationally. The Washington Department of Health said this was the first death of this kind in the state.

An obituary for 37-year-old Jessica Berg Wilson Wilson says she was “vehemently opposed to taking the vaccine,” but took it in order to comply with a mandate to become a “room mom” for her two young children.

The obituary said, "During the last weeks of her life, however, the world turned dark with heavy-handed vaccine mandates. Local and state governments were determined to strip away her right to consult her wisdom and enjoy her freedom."

Wilson was in good health and not at risk for serious illness, the obituary said: "In her mind, the known and unknown risks of the unproven vaccine were more of a threat. But, slowly, day by day, her freedom to choose was stripped away."

During a weekly COVID-19 briefing, Snohomish County Health Officer Dr. Chris Spitters said about her case, “Even the best medical interventions carry with them some risks.”

Spitters said the chances of contracting the blood clots from the J&J vaccine are rarer than severe complications from other vaccines for other diseases we readily accept.

“Despite this sad event and a handful of other ones like it, we have to forge on as a society and take the route that carries the most benefits, the best benefit to risk ratio," Spitters said.

Earlier this year, the CDC paused its authorization of the J&J vaccine to study the risks of these blood clots. However, the CDC determined that the benefits of the vaccine outweigh the risks of catching COVID-19.

As of July 8, only 38 of the 12.5 million people who received the J&J vaccine reported having these complications, most of whom recovered.

The CDC found that women ages 18-49 are at higher risk for adverse effects from the J&J vaccine than women ages 50 and up.

Still, the CDC said the benefit far outweighs the risk, explaining that for every 1 million doses of the J&J vaccine administered to women ages 18-49, 297 hospitalizations, 56 ICU admissions and six deaths due to COVID-19 could be prevented. Meanwhile, only seven cases of blood clots would be expected.

These blood clotting cases have not been found in patients who receive the Moderna or Pfizer vaccines, which are the most widely available vaccines in King County and across the nation.