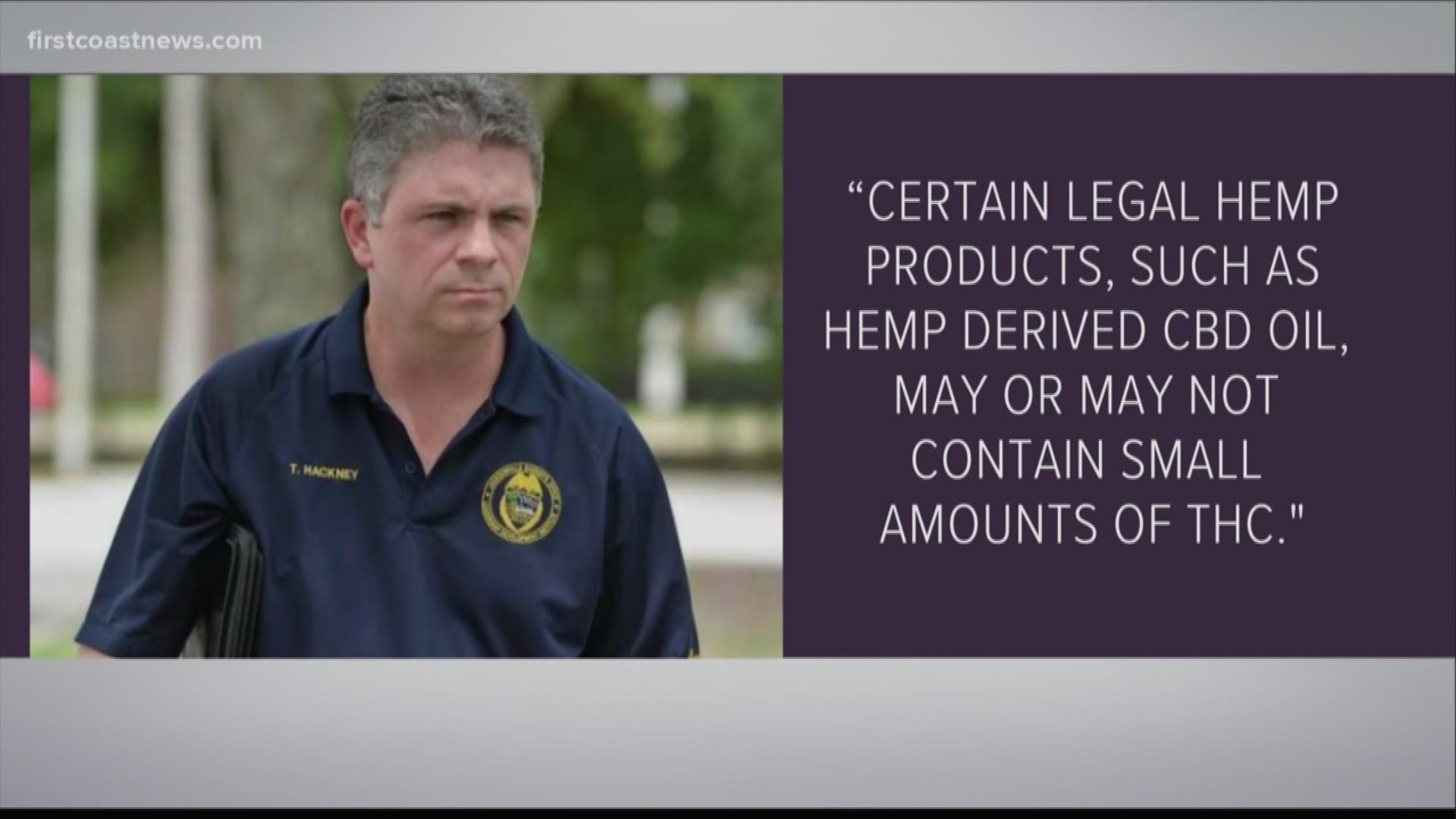 As of July 1, CBD is also legal* in Florida, but that doesn’t mean it’s OK for police officers.

A memo obtained by First Coast News puts the breaks on CBD use by officers with the Jacksonville Sheriff’s Office.

The memo, sent to employees Friday evening, was prompted by at least one officer using CBD oil for therapeutic reasons. Sources tell First Coast News an officer’s drug test screened positive for THC – the psychoactive ingredient in marijuana – and that the officer has been placed on desk duty pending an internal investigation.

CBD oil is an extract of the hemp plant, which was legalized nationwide late last year as part of the 2018 Farm Bill. Though hemp is in the same family as marijuana, it only contains trace amounts of THC – meaning it doesn’t get you high.

But that doesn’t mean it can’t show up on a drug test.

Mark Baughman, a former DEA agent and First Coast News crime analyst, says “the majority of CBD out there has very little, if any, THC content in it. But it’s possible that some could.”

The memo from Director of Personnel and Professional Standards Tom Hackney warns, “certain legal hemp products, such as hemp-derived CBD oil, may or may not contain small amounts of THC. … The presence of THC in a member’s system, regardless of the source, will place that member in violation of the agency’s drug screening program.”

Baughman says the memo suggests JSO is searching for its footing in a changing drug landscape.

“I think they have to draw the line somewhere with that,” Baughman said. “At the same time, the general public is out here using it, and law enforcement are general public as well.”

Tad Delegal is a labor and employment lawyer, and former general counsel for the police union. He doesn’t think the memo is enforceable.

“You can’t be disciplined for the use of legal medications,” he said.

Delegal says CBD can accumulate in the body over time, along with trace amounts of THC. He compares it to diet drugs – a legal product that has been known to show up as a positive drug test for amphetamines.

Delegal adds that it should be up to a doctor to determine if a positive drug test is the result of a legitimate medical use.

Hackney tells First Coast News he wrote the memo because "We sought to clarify for members that the presence of THC in your system while working is a violation of our substance abuse policy."

He was not sure if other law enforcement agencies in Florida have drafted similar policy memos. He said they "have not had any direct reactions from officers or the union" about the memo.

*Note: Only hemp-derived CBD is considered legal by the federal government. According to the DEA, marijuana-derived CBD (even if it contains no more than .3 percent THC) remains illegal, a Schedule 1 controlled substance.