Multiple sources have confirmed to First Coast News that the municipal utility is being asked to fulfill a comprehensive records request from the federal government.

JACKSONVILLE, Fla — This week JEA was handed a federal grand jury subpoena to fulfill a comprehensive records request related to the federal investigation into the utility, according to multiple sources.

The subpoena comes in the midst of a parallel investigation by Jacksonville City Council into the utility's failed privatization process and controversial bonus plan proposal.

First Coast News has obtained a copy of the subpoena, which can be viewed here: 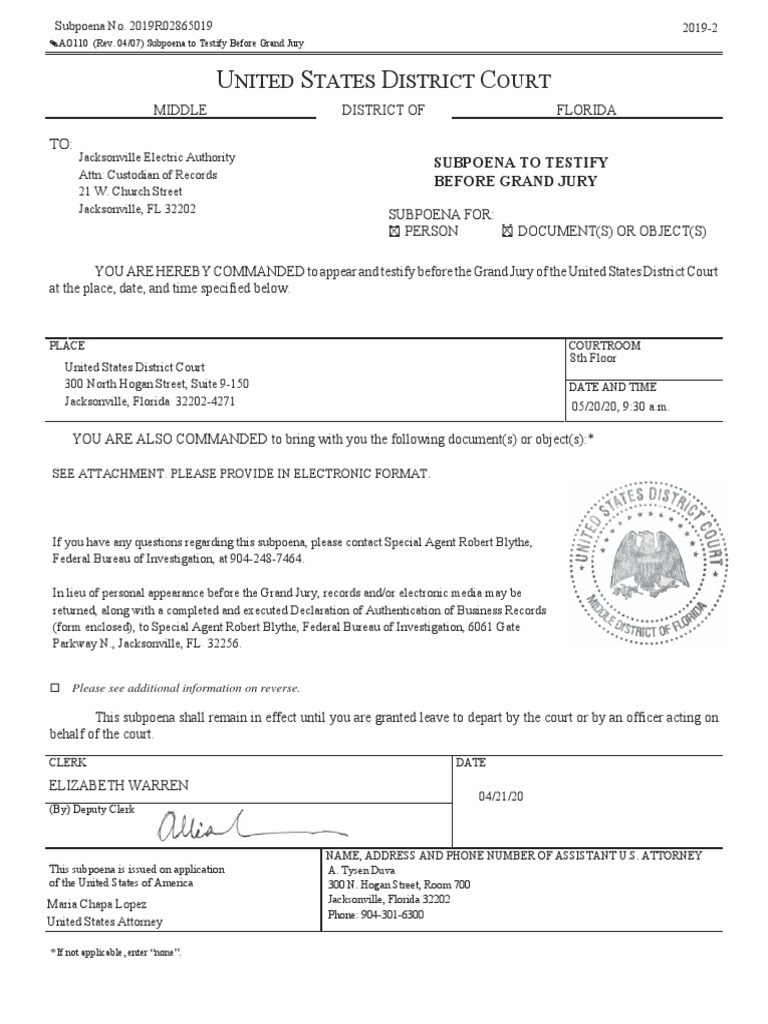 The federal subpoena requests a slew of records on everything from the invitation-to-negotiate process (ITN) to the workings of the senior leadership team at the time.

Along with information on the ITN process and communications from leadership, the document requests information about a secure messaging app called Confide, and any records associated with the usage of the app by former CEO Aaron Zahn, lobbyists and the mayor's administration.

First Coast News spoke with Councilman Rory Diamond who currently chairs the city council's special investigative committee. Diamond said he and his colleagues were not surprised to learn about the subpoena being handed down.

"I think everybody on the committee expected or hoped that the FBI would be diligently looking through this. But you never know because it's always secret. Today, it gives us a very good, clear understanding that they are going after a serious criminal investigation," Diamond said.

Split into 50 points, the eight page document is an extensive request. It also dives deeply into the background of the hiring of Zahn.

"To issue a broad based, big subpoena against a huge public utility like this tells me that this investigation is not only happening, but that it's pretty far along," Diamond said. "And that at the end of the day they're going to indict some people, I'd be shocked if they didn't."

First Coast News spoke with former federal prosecutor Curtis Falgatter to ask about just how large the subpoena is relative to others he has seen.

"It's one of the longest subpoenas I've seen," Falgatter said. "You can see it appears to pick up, really, most all of the concerns that have been in the public eye."

In early March, First Coast News reported that interim JEA CEO Melissa Dykes, who took the reigns after the ousting of Zahn, would be asked to go under oath by council's special investigative committee.

Zahn, who was officially shown the door in January after a long administrative leave, was deeply involved in the behind-the-scenes push for privatization, as well as the controversial bonus plan scheme.

In his press conference Thursday afternoon, Mayor Lenny Curry said he and his office are ready and willing to comply with investigations. He said leadership at JEA are ready to do the same.