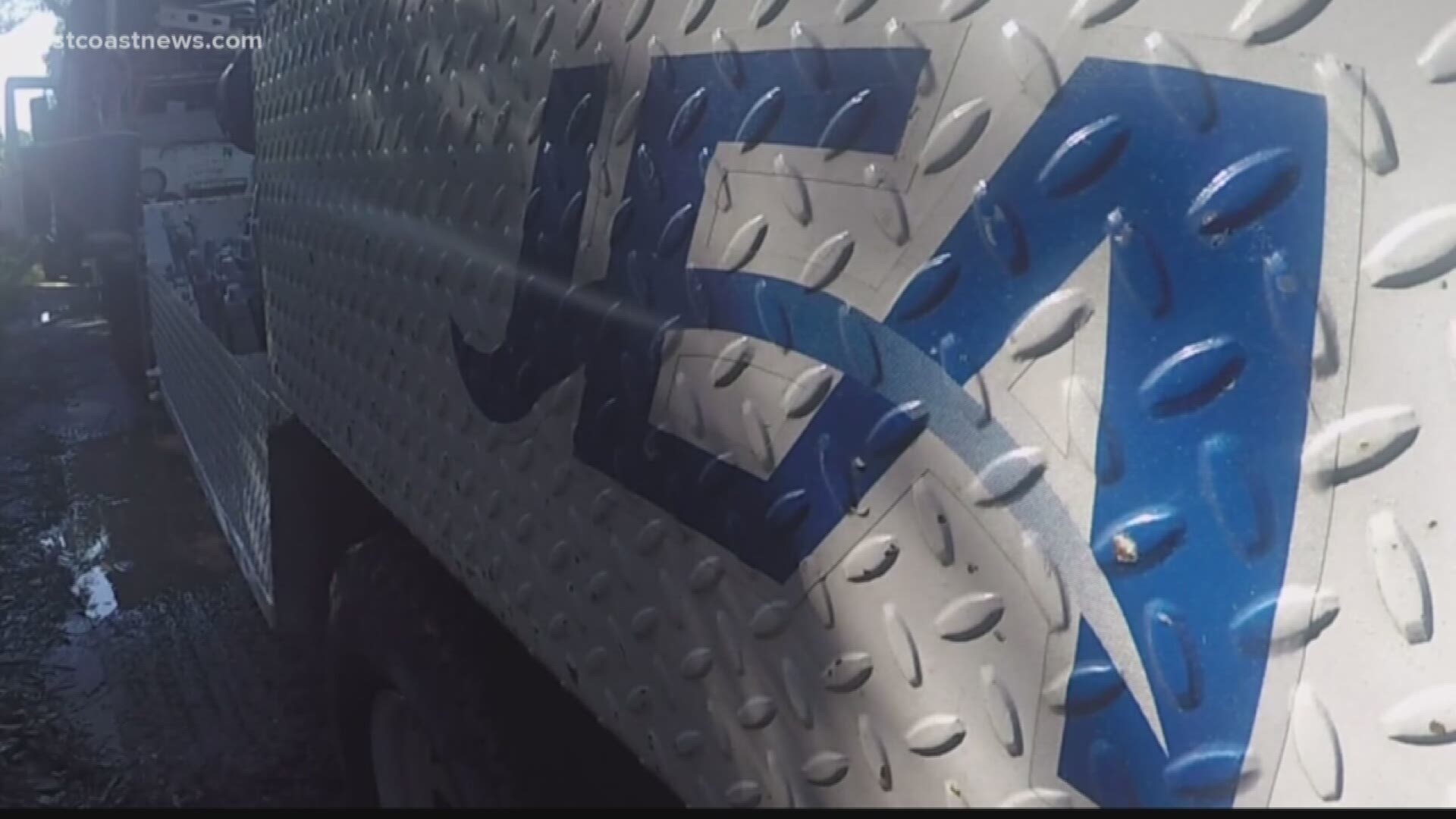 At 2 p.m. Monday, an ordinary room inside JEA headquarters will take center stage for a bid opening that could set off a history-making chain reaction that ends up selling the utility that Jacksonville has owned for 125 years.

It will take months of complex, closed-door negotiations before JEA emerges in February with a recommendation. Until then, JEA says it won’t reveal the identity of bidders, making it a far more secretive process than typically is the case.

The outcome for JEA — often called the “crown jewel” of city government — will affect several hundred thousand customers who make up the eighth-largest municipal utility in the nation.

For entities that want to purchase JEA lock, stock and barrel, the threshold price to even get consideration would be in the range of $6.8 billion to $7.3 billion, according to information provided to interested buyers. 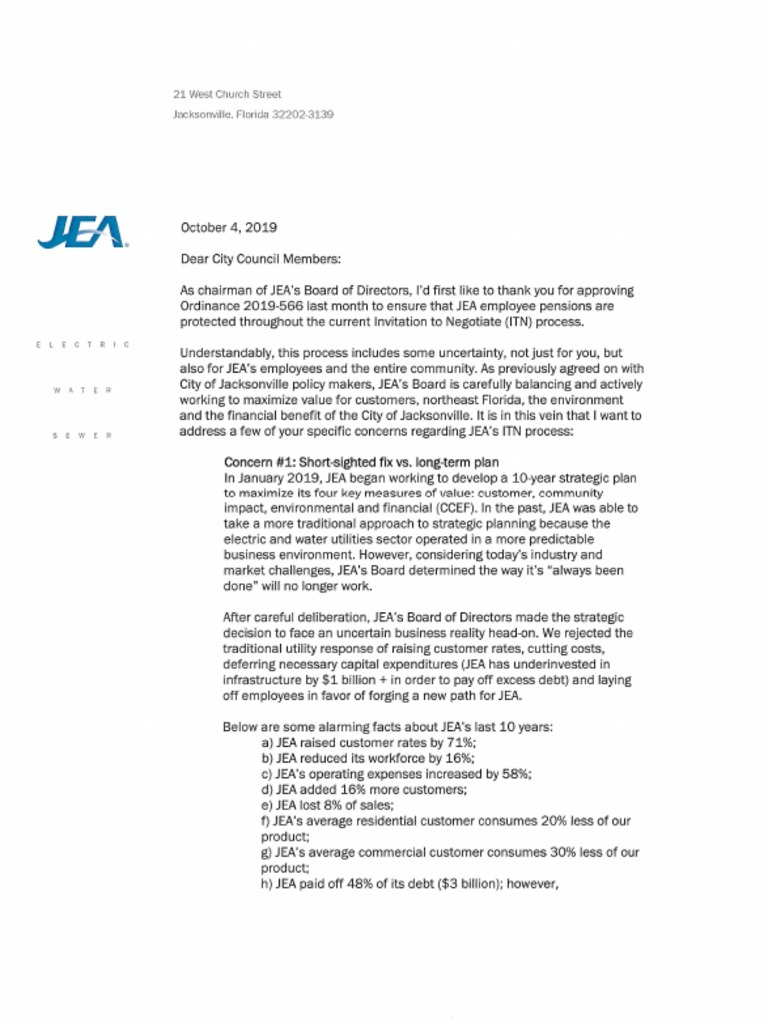 City Council Letter From April Green
October 4,2019 Dear city Council Members: {As chairman of JEA's Board of Directors, fis ke to thank you for approving Ordinance 2019-566 last month to ensure that JEA employee pensions are protected throughout the curren Invitation to Negotiate (ITN) process, Understandably, this process includes some uncertainty, not ust for you, but also for JEX's employees and the entire community.

Entities don’t have to put in offers for the entire utility. JEA also will consider bids for portions of the utility, such as just the electric side or only the water side of the operation, which JEA could mix and match with other offers.

JEA also has indicated to potential bidders the utility would be open to considering a concession contract, a type of deal where an entity would make a multi-billion dollar upfront payment to the city and enter into a long-term contract to manage JEA, which would remain city-owned.

Mayor Lenny Curry has praised JEA’s decision to seek offers. JEA made a move in early 2018 toward putting the utility up for sale but backed off amidst a barrage of questions from City Council members and a public backlash.

Curry said in a recent speech to the Meninak Club of Jacksonville he and City Council should give JEA space to conduct negotiations and figure out what JEA is worth on the market.

“What’s happening now, I believe, is what should have happened a year or two ago, and that is a thorough understanding of the strategic future of the utility, what’s the value, and what’s the highest and best use of that value for the people of Jacksonville,” Curry said.

The JEA board launched the privatization process without getting buy-in from council about seeking offers or even what the minimum requirements of a deal should be.

The day after JEA opens bids Monday, City Council member Michael Boylan will have a meeting Tuesday with council members about how they should use the coming months to prepare for a vote in the spring.

“I share the belief of many of my colleagues that we have allowed JEA to drive the agenda and the timeline for all of this, and I think it’s time for City Council to take ownership,” Boylan said. “We’ve been put in a reactive position, and we need to be in an active position.”

He said he doesn’t want to stop JEA from proceeding with its negotiations. He said those talks could happen while council conducts a series of public hearings to drill down on the utility’s finances, along with examining the pluses and minuses of ending city ownership of JEA.

“Are they in the hole? Are we desperate to sell?” Hazouri said. “Are they doing well and we don’t have to? Are they truly in a financial bind, and if they’re not, what are the advantages and disadvantages going to be of a sale?”

He said that diagnosis will help determine what the best remedy is.

“Is it going to take a fly-swatter or a sledgehammer to address this?” he said.

City Council members and the public won’t learn much at the Monday bid opening, other than how many entities submitted bids.

JEA is invoking a provision in state law that allows it keep the names of bidders confidential, as well as details of their offers. JEA says the confidentiality will help get the best terms possible because buyers won’t know what other entities are putting on the table.

Only a small group of employees within JEA will have access to the bids and take part in negotiations. Even JEA board members are not supposed to know the identities of who wants to make a deal in the process, called an “invitation to negotiate.”

In a late-breaking wrinkle to who will be in the room, city Inspector General Lisa Green wrote to JEA on Friday to say that the Office of Inspector General and the city’s Office of Ethics would attend meetings related to the ITN to “monitor and ensure compliance” with applicable laws, rules and policies.

City Council member Danny Becton, who is the council liaison to JEA, also will have some access to the ITN process.

City Council member Danny Becton, who is the council liaison to JEA, also will have some access to the ITN process.

At a minimum, a deal would have to net at least $3 billion in cash for City Hall after covering some other big-dollar requirements.

A purchaser of the entire utility would have to pay enough for JEA to wipe out all of its billions of dollars in debt along with some other financial liabilities and transaction costs from a deal.

The sales price also would have to cover $400 million in one-time customer rebates if a deal ultimately goes through, plus $132 million for enhanced pension benefits for JEA employees and $165 million in employee retention bonuses.

In order to take care of all those expenses and still have enough to put at least $3 billion into city coffers, an entity seeking to acquire the utility would have to pay $6.8 billion to $7.3 billion, according to a spreadsheet JEA provided as part of its solicitation package.

The $3 billion net gain for the city is the floor for any deal.

Based on actual prices on other utility sales and on recent studies of what JEA’s value is, the asking price of at least $6.8 billion to $7.3 billion appears doable.

JEA has 466,00 electric customers. In addition, it has one of the nation’s largest water systems with 359,000 customers.

The Public Utility Research Center at the University of Florida put JEA’s total value at $7.5 billion in a report issued last December by the Jessie Ball DuPont Fund.

Public Financial Management, a consultant hired by JEA, said in a February 2018 report that the utility’s value could range from $7.5 billion to $11 billion.

The biggest portion of value for JEA is the utility’s network of electric, water, and sewer plants and lines serving customers in most of Duval County and parts of St. Johns, Clay and Nassau counties. JEA’s financial reports value those capital assets at $5.4 billion.

JEA also has $1.45 billion in cash and investments on its books, according to the utility’s August financial report.

JEA owns thousands of acres of land, including the 1,600-acre Northside tract where the utility is demolishing the shuttered St. Johns River Power Park. JEA told prospective utility buyers it is “continuing to explore options” for that tract, which has been cited as a possible place for development tied to Jacksonville’s port.

JEA does not have an ownership stake in the budget-busting, delay-plagued nuclear plant, but it has a 20-year agreement to purchase power from Vogtle, which would supply 13 percent of JEA’s electric capacity in 2023.

JEA sued last year to void the Plant Vogtle contract but has not been successful so far in court. JEA told prospective buyers if there is a deal for the utility, JEA expects the deal would be structured in a way that does not violate the purchased power agreement’s terms.

In written responses to questions from potential buyers about the financial impact of the Vogtle agreement, JEA referred to the utility’s 2018 annual report. It showed that as of September 2018, JEA’s cost for paying a portion of the debt for the nuclear plant would total $1.66 billion through 2043.

After the bid opening, JEA will spend two weeks evaluating offers and deciding which entities will move to the next round of intense negotiating sessions. The selected entities will remain confidential, as will the negotiations until JEA administrators meet in public to discuss which “best and final offer” will get their recommendation.

After JEA makes its determination, it will end the secrecy and reveal all the records for the bids and the negotiations, including tape-recordings of closed-door meetings.

If the JEA board approves a deal that involves more than 10 percent of the utility’s assets, the City Charter requires City Council to also vote on whether it agrees with the terms and conditions. If City Council agrees it’s the best direction for the utility and the city, then voters would get the final say in a referendum.

The timelines put forward by JEA anticipate City Council would start vetting a deal in March. The timeline does not have an expected referendum date. Potential dates would be the August 2020 primary election or the November 2020 election.

Boylan said that because City Council wasn’t involved in shaping the minimum requirements crafted by JEA, the council’s role in the spring will be limited.

“They’re going to bring us a package and say take it or leave it, and we’re going to have to either vote it up or down,” Boylan said. “We’re not going to be in a position to renegotiate this thing, and we need to approach it that way.”

He said until then, City Council needs to ask “some challenging questions” by bringing in JEA, along with experts in water and electric utilities, to take a “real independent look at the pluses and minuses of this opportunity.”

Hazouri said a July 2018 report issued by City Council last year about JEA’s future “gave us some footprints to follow.”

“We know clearly JEA is an asset to the city,” he said. “It’s a very complex process and we want to make sure City Council has a role in the outcome. I don’t want to sit here twiddling my thumbs waiting for a proposal in the spring.”

Click here to read the full story from our partners at the Florida Times-Union.