Beach leaders issued a statement regarding their preparations and safety measures ahead of the event, saying that its organizers have not asked for any permits. 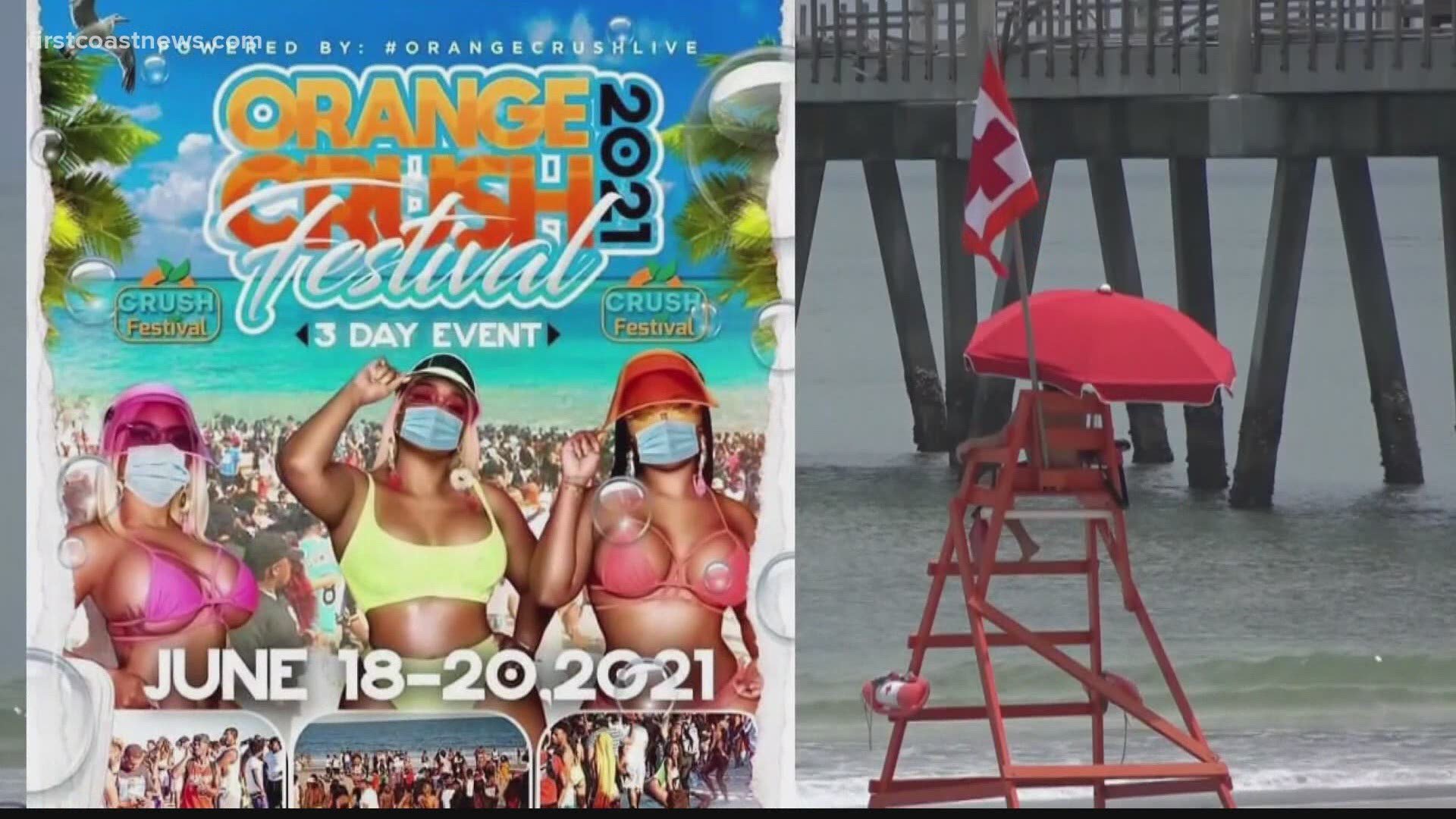 Originally, event organizers were promoting the three-day weekend of parties and clubbing as taking place in Jacksonville Beach. When the event schedule was released last week, however, it appears none of the official events were booked at Beaches venues. There are some beach days scheduled, but no permit is needed for that.

According to the festival's organizers, there will be a shuttle that provides transportation to the events. The shuttle's schedule is on the festival's website.

Beach leaders issued a statement regarding their preparations and safety measures ahead of the event, saying that the event's organizers have not asked for or been granted any permits from Atlantic Beach, Neptune Beach or Jacksonville Beach.

“When people first heard Orange Crush Festival, they just immediately assumed that it was booked in our festival space, so there has been a lot of confusion among our citizens," Hoffman said.

"Beaches officials, law enforcement, and staff have monitored the event closely and have worked to stay appraised of the evolving plans," the statement said. "While there are no permitted events on public land, officials are prepared for a very busy weekend."

The festival moved to Duval County after taking place on Tybee Island's beach near Savannah for years. Organizers said they relocated to Jacksonville due to "civil rights violations and political injustices." Stephan Smith, the organizer of this year's Orange Crush, said he bought the rights to the festival along with a few other investors and helped move the festival to Jacksonville this year.

He said Monday he expects 20,000 people to attend the festival based on ticket sales so far.

The event has been accompanied by its fair share of controversy. A YouTube video published in 2012 claims to show the aftermath of the festival, with the beach strewn with plastic bottles, bags and other litter.

“The festival’s promotion has been their own worst enemy in terms of how our citizens are reacting because it is big crowds, potentially weapons and illicit activity that we are seeing on their own promotion, and I think one thing that our citizens really get outraged about is trash," Hoffman said.

According to our news partners at the Florida Times Union, at the last Orange Crush in 2018 on Tybee Island, police arrested 36 people, including one for discharging a firearm while under the influence. 2019's festival was canceled after someone tied to the event was arrested after throwing a house party that wasn't allowed.

"Due to the history of the event at its previous location, police departments across the area will assist to ensure that residents and visitors alike enjoy a safe weekend at the beach," the Beaches leaders' statement says.

According to Hoffman, details of the festival have been scarce. She said she has talked to Smith a while ago about the event, but beach leaders have had to keep up with the festival through its online presence.

“We really haven't had any contact with the organizers recently, so we are monitoring things just like everybody else through social media and through Eventbrite, so really, our perspective is a little different than it was when the event was intended to be a beach festival," Hoffman said.

When First Coast News asked Smith about why communication fell off between festival organizers and beach officials, Smith didn't answer. He did say that after he reached out to a few venues to see if they could host events, he spoke with the mayor of Jacksonville Beach and law enforcement. Smith said they asked if he needed officers for the event, how many people will be attending and what Jacksonville should expect.

Smith said he grew up in Jacksonville and wants the festival to be a positive experience for the entire city.

Smith said he has a message for everyone coming to the festival.

"The sheriff and the mayors are not playing with any of you. They’ve made it very clear if you come here disrespecting the city, if you vandalize our city, if you commit violence, if you litter, you will be spending the night in jail," Smith explained. "Any criminal activities will be punished. So, do not come with the mind that you are coming to do any kind of mischief," he said.

Hoffman said neighboring police departments are helping out this weekend to make sure everything goes smoothly.

"Everyone is pitching in and providing manpower," Hoffman said. "We welcome visitors out here by the droves every weekend every summer and we’re happy to do that. It’s part of our responsibility of being here as a coastal community and we certainly don’t want to discourage people from coming, but, again, when we look at the history of this event and some of the talk and videos associated with it and we have to be prepared for that."

"Our main job as a city is to make sure that our citizens and our visitors are safe, and we’re going to do that," she continued.

A few businesses decided to close their doors the weekend of Orange Crush. Staff at one business told FCN they don't have enough staff to run it safely. Hoffman said unlike other events held at the beach, officials and business owners don't know what to expect for Orange Crush.

According to Smith, when he first approached businesses and asked them to host events for the weekend, he said the request wasn't received well. Smith said he thinks the reaction was tied to race. The festival draws a largely Black audience of young adults.

“When I had tried to reach out to a lot of the bars and a lot of the entities that had to do with the beach, they were like, 'we don’t want your demographic here,' or 'your kind of people,' and some worded it a different way," he said.

Hoffman said she doesn’t think race is a reason some shops decided to close. She said she thinks it’s a matter of organization of the event and not knowing what to expect.

"When we are having to watch social media and Eventbrite to even know what to anticipate, that’s a challenge and that is something our restaurant and bar owners have to make the decision," Hoffman said.

To view beach rules for Jacksonville's Beaches, including prohibition of open containers of alcohol, littering and walking on the dunes, click here.