Quizzed on whether Jacksonville's officers and firefighters can beat NYPD's team, Sheriff Mike Williams said, "no question we will pull that out on Saturday night." 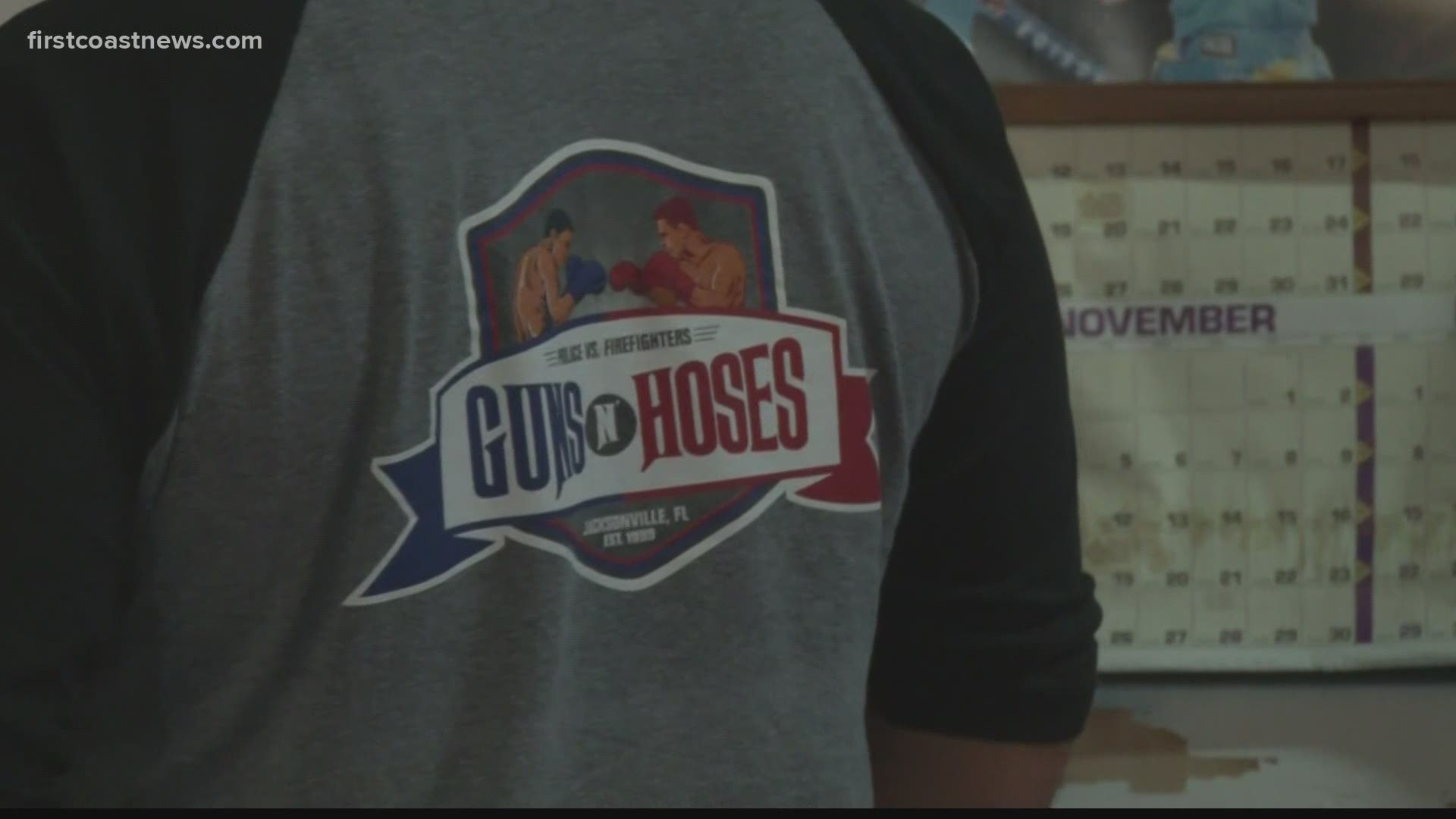 JACKSONVILLE, Fla. — The city's annual charity boxing ring rivalry between Jacksonville cops and firefighters will hit the canvas this Saturday, but with a twist.

It won't be Guns versus Hoses.

Instead, Jacksonville's firefighters and officers join forces to take on the NYPD blue at the VyStar Veterans Memorial Arena.

The Fighting Finest — New York City's official police and corrections boxing team —   is coming to town for the 22nd annual Jacksonville Guns N’ Hoses. It will be the first time they will pair up to battle a team from another city, Guns N’ Hoses director Tom Waarum said.

The Fighting Finest are looking forward to Saturday's match, said retired NYPD Lt. Dave Siev. He ran the NYPD boxing team from 2000 to 2019 with partner Pat Russo and will do live commentary on the bouts on the team's website at smokertalk.com. FYI — Smokers is the informal name used to describe the boxing matches police officers used to settle grudges without any problems.

"We are pleased to come down for a Florida Guns N' Hoses smoker," Siev said. "We love supporting charity and camaraderie. I'm bringing a mixed team from the North, and we expect the matches to be fun and competitive."

Sponsored by the Fraternal Order of Police Foundation, Guns N’ Hoses raises money for the Police Athletic League and other charities, with about $1.7 million raised since the event began. Firefighters hold an overall 12-7 lead over the police with two ties.

The Sheriff's Office won the 2019 event, the last one held since the pandemic but not including February's Guns N' Hoses hockey game. The hockey record stands at 4-2 in favor of the firefighters.

Quizzed on whether Jacksonville's officers and firefighters can beat NYPD's team, Sheriff Mike Williams said, "no question we will pull that out on Saturday night."

The Fighting Finest raises money for children's charities as well as supporting three Cops & Kids Programs. They also have an annual boxing match against the Fire Department of New York.

The usual Guns N' Hoses format sees firefighters and officers facing off in three, one-minute rounds each. But when COVID-19 slammed the jail door on last year's event, it also postponed former coordinator Alex Bergamo's plans to bring the Big Apple's boxers down South for some action, Waarum said.

NYPD boxing officials visited Jacksonville in early 2020. Then Waarum said he was literally across the street from Madison Square Garden to see a Fighting Finest match in March 2020 when both cities' events were canceled. So when the NYPD agreed to come down this summer, Jacksonville's fighters prepared via video.

"That's what we do; we watch their videos, and we sent them videos of our fights at Guns N' Hoses," he said. "We want to make sure that each other are prepared and will have a good time. This is strictly a charity event."

Saturday’s event kicks off with a 3:30 p.m. street party on A. Philip Randolph Boulevard in front of the arena, with food trucks, drink booths, live entertainment, a fun zone and more.

After the fights, the street party continues starting at 10 p.m. on A. Philip Randolph with a live concert by Steve Augeri, former lead singer of Journey, and Sixwire.

Saturday tickets range from $15 general admission up to $55 club seats, available at ticketmaster.com or the arena at 300 A. Philip Randolph.