The camp along Jefferson Street has grown dramatically since the city announced a program last month to move the people there to hotels. Now, it will be fenced off.

JACKSONVILLE, Fla. — A growing homeless camp downtown will soon be vacated and fenced off, according to the City of Jacksonville.

The camp, located along Jefferson Street between State and Beaver streets, is a public health concern, according to city officials. That's why one month ago Wednesday, the city announced a partnership with area homeless service providers and nonprofits to help move them into hotel rooms and provide assistance with shelter, food and long-term housing options.

But, in the 28 days since the Pathway to Home program was announced, the number of tents pitched and people living in the vacant field has increased dramatically.

Now -- the city says the people living there will need to seek alternative shelter.

"The City of Jacksonville is responsible for enforcing code violations that compromise public safety, and at this time, we have to take precautions to ensure individuals are not at risk," a city spokesperson said in a statement to First Coast News Wednesday. "In order to also ensure these individuals can take advantage of the many resources available to them, like food, water, bathrooms, shelter, storage, clothing and much more, we must relocate them to places that do not pose public health or safety risks."

The city will have a temporary indoor shelter that will open for 30 days beginning March 9, connecting people in need to resources such as overnight shelter with bathroom and shower facilities; food, water and essential items like hygiene kits; employment, medical and social services. People can also go to local shelters, which the city says all have current capacity.

Jacksonville Mayor Lenny Curry addressed the capacity at shelters during a news conference last month, requesting reporters spread the word to people in need of shelter while covering the homeless camp.

"Look, there’s capacity right now in our shelters," Curry said. "So I would encourage people, if you’re down there covering it, tell them – there is room right now. There’s capacity. So I want to see people obviously to have access to housing, and our nonprofit leaders that are in that space are working hard on it every day.”

The site of the current camp will remain vacant and fenced off, the city said, although no fencing currently exists at the location.

People staying at the encampment are being provided with a document of resources available to them. You can see the resource guide below. 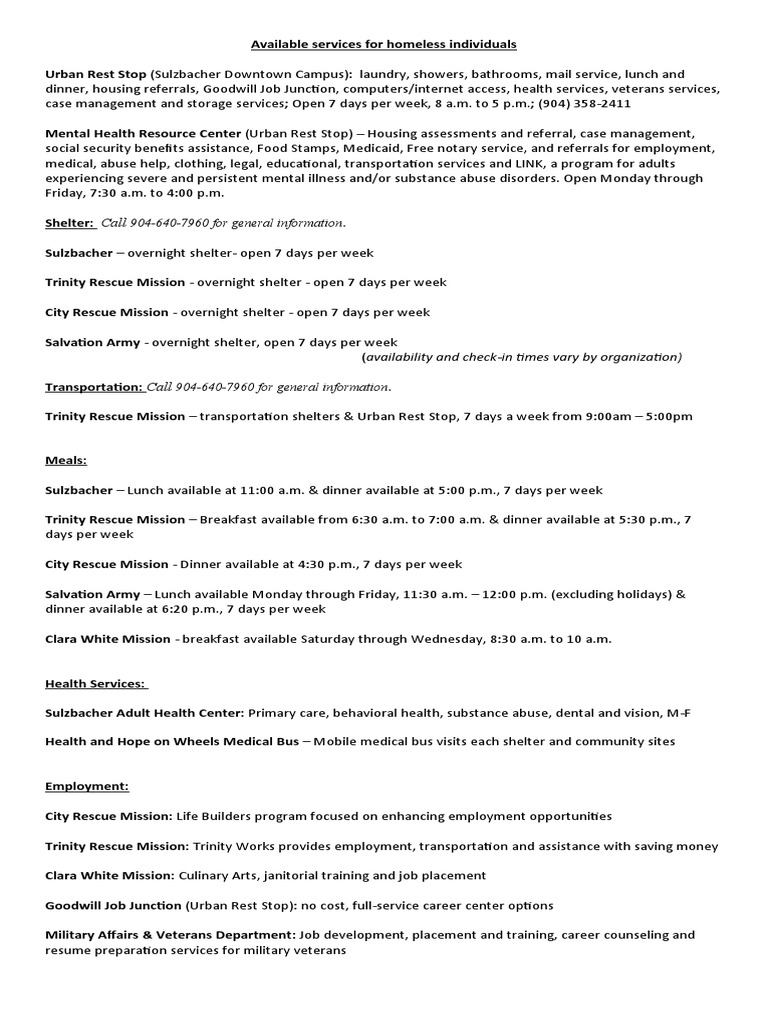