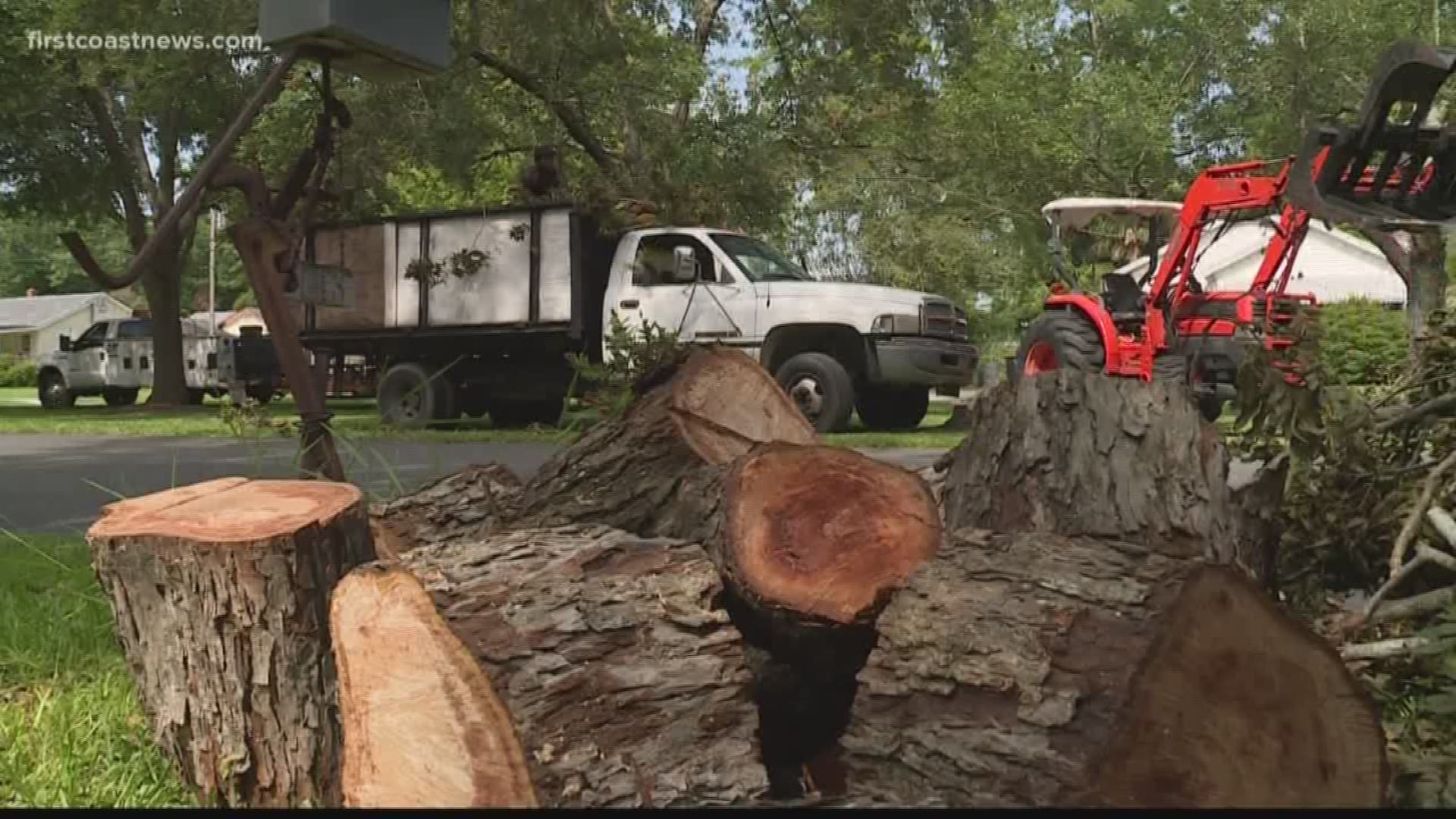 JACKSONVILLE, Fla. — Is this a case of the contractor removed the wrong tree? Larry Dixon said he was surprised to find a city hired a tree contractor at his West Jacksonville home removing his Pecan tree.

He said he contacted the city about two trees in the city's right-of-way because they look like they're dying.

He said that's when he was given a citation for the dead branches on his maple tree.

"I reported their trees and they gave me a citation for mine, that is correct," said Dixon.

In April, his citation was referred to abatement. Last Thursday a city contractor showed up and removed his pecan tree, not the maple with its dead branches.

Five days after cutting down the tree, the same the contractor was back removing the debris.

He told On Your Side he removed the tree per city instructions.

As for the trees in the city's right-of-way that Dixon reported, they're still there and they still look like they're in bad shape.

"I'd like to see the city held responsible for its actions," Dixon said.

Dixon is convinced that the city acted improperly and he wants it corrected.

But the city emailed, "there is no error."

This raises the question that at what point can the city's Municipal Code Enforcement enter private property? The question has been brought up before and resulted in an opinion from the Florida Attorney General Office:

This is in response to your request for an Attorney General's Opinion on substantially the following question:

Is a municipal code inspector authorized by law to enter onto private premises to conduct inspections or assure compliance with local technical codes without the consent of the owner or occupant or having first procured a warrant?

This request has been submitted on behalf of the Mayor and Town Council of the Town of Medley.  According to your letter the Town of Medley enacted an ordinance in 1981 pursuant to former Ch. 166, F.S. (now Ch. 162, F.S.) which created a code enforcement board.  Concern has been expressed recently regarding the authority of a municipal code inspector to inspect private premises to which the officer was denied access or, once on such premises, the officer was requested to leave.  Your inquiry generally refers to "premises" without distinction between business premises and private residential premises.

The intent of the "Local Government Code Enforcement Boards Act," ss. 162.01-162.13, F.S., is to protect and improve the health, safety and welfare of county or municipal citizens by authorizing the creation of administrative boards to provide an equitable, expeditious, effective and inexpensive method of enforcing county or municipal technical codes.  Section 162.02, F.S.  The local code inspectors are the authorized agents or employees of the county or municipality responsible for assuring code compliance (s. 162.04[2], F.S.), whose duty it is to initiate enforcement proceedings of the various codes (s. 162.06, F.S.).  No member of the code enforcement board has the power to initiate such enforcement proceedings.  Section 162.06(1), F.S.  Such assurance of code compliance and enforcement proceedings apply or pertain to any building or premises, commercial or residential, subject to the technical codes described in s. 162.02, F.S.

The Fourth Amendment to the United States Constitution, made applicable to the states through the due process clause of the Fourteenth Amendment, Mapp v. Ohio, 367 U.S. 643, rehearing denied, 368 U.S. 871 (1961), guarantees to all persons the right of privacy free from unreasonable state intrusion.  In addition, s. 12, Art. I, State Const., provides protection from unreasonable searches and seizures:

"The right of the people to be secure in their persons, houses, papers and effects against unreasonable searches and seizures, and against the unreasonable interception of private communications by any means, shall not be violated.  No warrant shall be issued except upon probable cause, supported by affidavit, particularly describing the place or places to be searched, the person or persons, thing or things to be seized, the communication to be intercepted, and the nature of evidence to be obtained.  This right shall be construed in conformity with the 4th Amendment to the United States Constitution, as interpreted by the United States Supreme Court. . . ."

Both business or commercial premises and private residences are afforded protection from unreasonable searches by s. 12, Art. I, State Const., and the Fourth Amendment to the U.S. Constitution.  See See v. City of Seattle, supra, in which the U.S. Supreme Court held that administrative inspections of commercial structures as well as private residences are forbidden by the Fourth Amendment when conducted without a warrant; and Jones v. City of Longwood, Florida, 404 So.2d 1083 (5 D.C.A. Fla., 1981), in which the court, in a wrongful death action, stated that an ordinance requiring the building inspector and fire chief to periodically inspect all buildings and structures within the city was qualified by the Fourth Amendment and could not authorize inspection of private property without a warrant.

A limited exception to the "administrative warrant" requirement has been established by the United States Supreme Court, holding that, even in the absence of consent, an administrative inspection may be made without a warrant if the business searched is one in which there is a legitimate public interest in close regulation and if the search is conducted under the authority of a statute meeting certain specificity requirements.  United States v. Biswell, 406 U.S. 311 (1972).  See also Colonnade Catering Corp. v. United States, supra; Donovan v. Dewey, 452 U.S. 594 (1981).  Compare, e.g., ss. 455.243, 465.017, F.S.; Olson v. State, 287 So.2d 313 (Fla. 1973).  No such statutory authority for warrantless searches appears to exist with regard to local code enforcement boards or code inspectors.  Therefore, the administrative searches or inspections under consideration may not be constitutionally conducted without the consent of the owner or the operator or occupant of the affected premises or without a duly issued search or administrative inspection warrant.

Therefore, it is my opinion that a municipal code inspector is without authority to enter onto any private, commercial or residential property to assure compliance with or to enforce the various technical codes of the municipality or to conduct any administrative inspections or searches without the consent of the owner or the operator or occupant of such premises or without a duly issued search or administrative inspection warrant.  The procurement and issuance of administrative inspection warrants is governed by the provisions of ss. 933.20-933.30, F.S.  However, owner-occupied family residences are exempt from the provisions of ss. 933.20-933.30, F.S., and as to those residences a search warrant or the prior consent and approval of the owner is required.