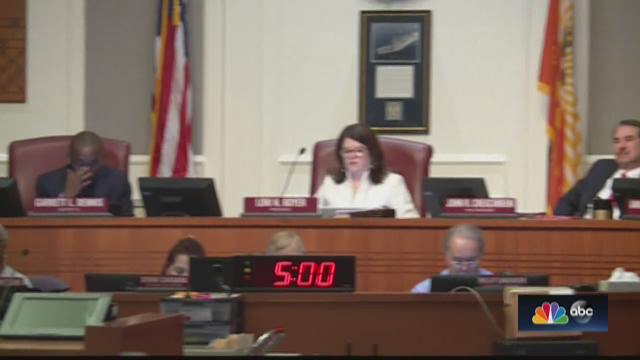 It looks like the third time was the charm. An amendment to extend Jacksonville’s Human Rights Ordinance to include the lesbian, gay, bi and transgender community passed City Council by a vote of 12 - 6 at its Tuesday night meeting. Mayor Lenny Curry returned the bill without signing it or vetoing it, making it law.

The issue has been a divisive one each of the three times it came before City Council, with those for and opposed passionately voicing their thoughts on the measure. The amendment extends existing prohibitions against discrimination based on race, religion, ethnicity or gender to include sexual minorities. The bill makes it illegal fire, or deny housing or service to people based on sexual orientation.

A similar measure failed in 2012 by a close 10-9 vote. Early last year, a revised version was withdrawn after it became clear it could not pass. However, Curry signed an executive action extending protections to city LGBT city employees.

#jaxhro :
Passed 12-6
Exempts small businesses and churches
Violation would not give prison time
Councilwoman Brown was not here @FCN2go

Council member Aaron Bowman, who proposed the most recent version of the bill, said a few weeks before the measure passed that he was sure it would. His chief opponent on the council, Council member Bill Guilliford, held a small forum where he expressed his skepticism at the usefulness of amending the HRO and mentioned an anecdote of a wrongful lawsuit that cost him time and money back in the 1980s when he was a small business owner.

Gulliford also called for the amendment to be put to a public vote, but that failed in committee by a 4-2 vote.

At a Feb. 6 committee meeting, six council members, including Bowman and Gulliford, voted to attach an amendment to the HRO that would provide exemptions for small businesses with up to 50 employees. Exemptions for the religious community were already in place. This bill would also allow businesses to continue to offer single-person bathrooms instead of requiring them to have unisex bathrooms.

Overall, the council fell on Bowman's side of the debate. But that wasn't always the case.

In 2012, a similar measure failed by a 9 - 10 vote - and then again 2016 saw the HRO killed after Council member Tommy Hazouri withdrew the bill - leaving Jacksonville as the largest city in Florida without a law specifically giving the LGBT community protections against discrimination.

But the 2017 attempt has a lot the previous tries didn't: the backing of over 500 local businesses, the endorsement from the Chamber of Commerce and an intersection of faith leaders from around the area.

There was still opposition. First Baptist Church has been against the amendment since its first iteration in 2012 and remains staunchly opposed. However, some in the faith community, including the Rev. R.L. Gundy, embraced the measure.

"We have over 200 pastors who are supportive of HRO and it becomes a matter of doing the right thing for God's people - all of God's people," Gundy said.

The brevity of the bill may have also led to its passing this time around. It's down to five pages from its previous 14.

Council members debated during the meeting, which was passionate at times, Gulliford put forth two amendments. One would have pushed the HRO vote to the public and another would have stripped protections from the transgender community. Both failed.

Curry returned the bill without vetoing it - it is now law, despite saying he continues to oppose the measure, and adding he thinks the protections he provided to city workers was enough.

"I said then and continue to believe additional legislation was unnecessary," he says in a news release. "But this evening, a super majority of the City Council decided otherwise."

His full statement is below:

Statement from Mayor Curry: "The supermajority made their will clear" He says now it's time to confront serious issues. @FCN2go pic.twitter.com/vo6aQtv7fW

Jacksonville residents who came to the meeting fell on both sides of the issues. Some there were in opposition, arguing the law will open up a door to violence.

"This opens bathrooms to any man claiming to be a woman," explained Joey Vaugh outside City Hall.

Moments after the vote was announced, supporters celebrated in front of City Hall.

Tom Serwatka joined the celebration - it was he and his husband's anniversary.

"We have been working for this over the last five years and this is amazing," he said.