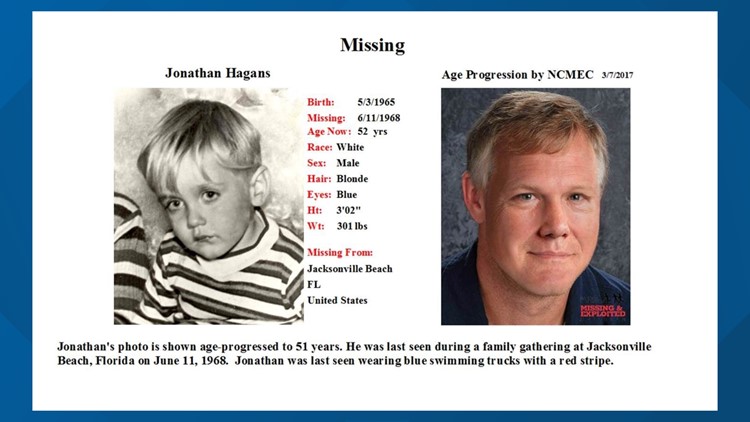 JAX BCH, Fla. — In the summer of 1968, a 3-year-old boy vanished from his family's sight during an outing at the beach and the toddler was never seen again. Gone without a trace, the little boy was presumed dead. More than half a century later, the cold case is now seeing new life.

On Thursday, the Jacksonville Beach Police Department announced it will be working with a team of Florida investigators and scent evidence specialists to examine the disappearance of 3-year-old Jonathan Hagans, who was known by his nickname "Jon Jon."

Investigators are hoping to uncover new evidence and leads in the cold case disappearance of Hagans. He was last seen on June 11, 1968, at Jacksonville Beach. Authorities believed he drowned.

According to police, a member of Hagans' family recently connected with a Tallahassee-based scent evidence expert named Paul Coley, who is also a former FBI Forensic Canine Operations Specialist. Hagans' family reached out for help in the hope of raising awareness for missing children. They also wanted to help show families how they can prepare, protect and prevent this situation from happening to their own loved ones.

Their partnership led to renewed efforts to analyze the search for Hagans. A task force was created to re-examine the evidence and data collected during the initial investigation.

If you have any information regarding the disappearance of Jonathan 'Jon Jon' Hagans, please call the Jacksonville Beach Police Department at 904-270-1667. You can also email their tip line at tipline@jaxbchfl.net. You can find more details about submitting tips at JacksonvilleBeach.org. You can follow the progress of the task force at FindJonJon.com.

According to other organizations that track missing person cases, like The Charley Project, Hagans' family believes the toddler was kidnapped and is still alive. They've also provided an age-progression photo of what Hagans may look like today.