The Jacksonville Community Action Committee has protested the bill for the past several months. 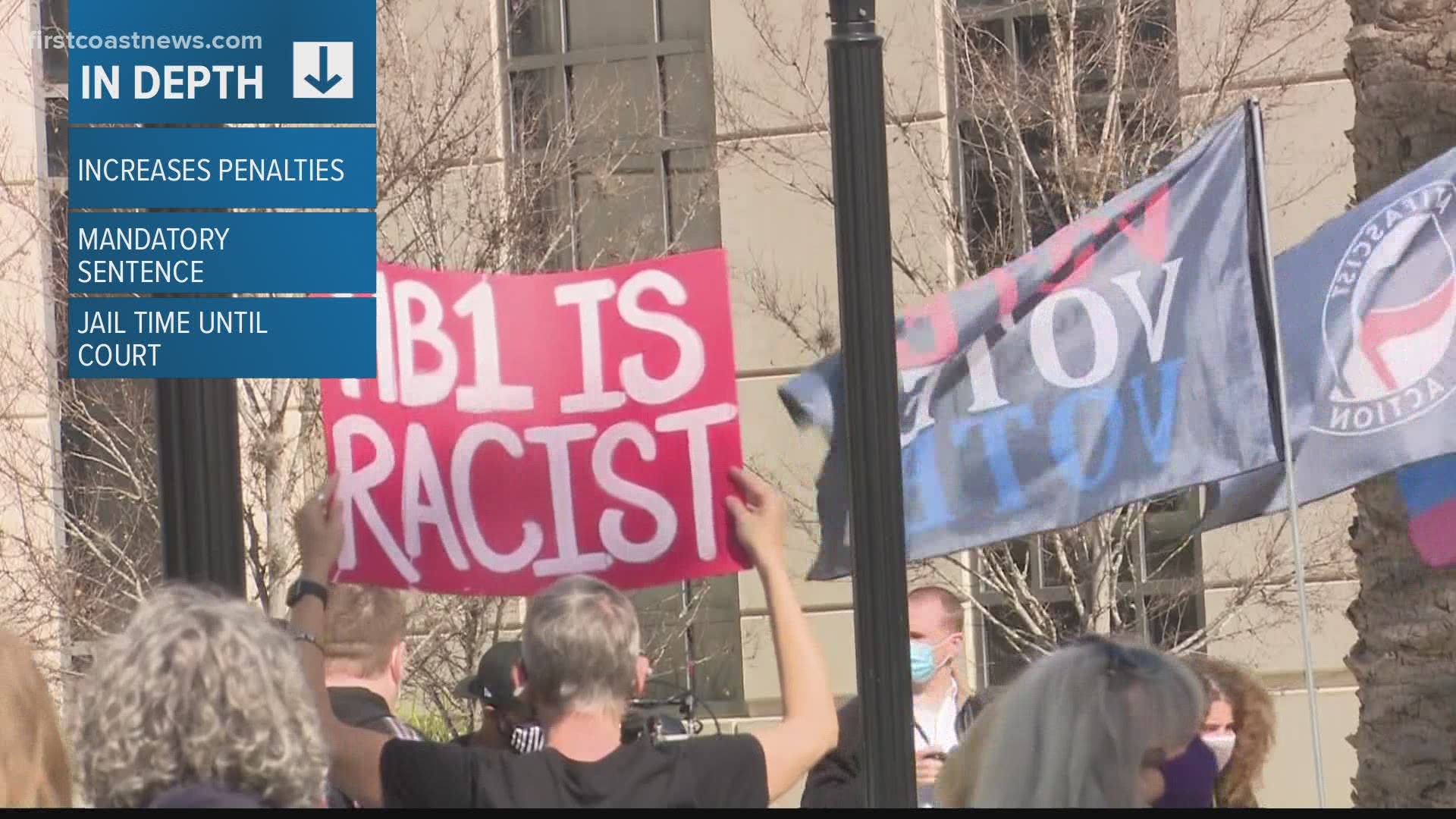 The Senate passed the bill, called the "Combatting Public Disorder" bill, or the so-called "anti-riot" bill, Thursday with a 23 to 17 vote. It's now headed to Governor Ron DeSantis' desk.

HB 1 increases penalties for crimes that happen during protests that become violent, and increases crimes for defacing monuments and other public property. It also allows state officials to challenge local governments that try to cut law enforcement budgets, and creates a mandatory sentence of six months in jail for anyone convicted of battery on law enforcement.

If you're arrested during a riot, you also have to stay in jail until your first appearance under the bill. Michael Sampson with the Jacksonville Community Action Committee said the bill tries to scare people from protesting.

“It's a very sad day for the First Amendment in the United States, but as well as Florida," he said. "So, it's very disappointing to see that it passed. I am of the belief that more than ever, you're going to see people have the resolve to use their First Amendment rights and protest and take to the streets against injustice," he said.

“If this legislation would have existed in Selma, Alabama, you know, Dr. Martin Luther King would've faced multiple felony charges. So, we're in a new age, and I think a lot of people are waking up, and I think this bill, and the passing of this bill, was extremely short-sighted," Sampson said.

The Jacksonville Community Action Committee protested the bill for months both in Jacksonville and in Tallahassee. Governor DeSantis initially proposed the idea for the bill following last summer's unrest and demonstrations against police brutality.

The bill would also penalize local governments that try to interfere with law enforcement officers who are trying to contain riots. Local governments could also be held financially responsible for damage if they don't control protests that turn violent.

It creates a new crime called "mob intimidation," as well. According to the bill, mob intimidation is defined as “unlawful for a person, assembled with two or more other persons and acting with a common intent to use force or threaten to use imminent force, to compel or induce, or attempt to compel or induce, another person to do or refrain from doing any act or to assume, abandon, or maintain a particular viewpoint against his or her will.” The crime is a misdemeanor.

It's also a crime to obstruct traffic during a protest under the bill.

Senator Aaron Bean, a Republican representing parts of Duval and Nassau Counties, voted for the bill.

"I will stand with you arm-in-arm to make changes," he said on the floor of the Senate Thursday. "I will not go forward and loot our mom-and-pop shops. I draw the line at burning buildings down that people's life savings helped create," he said.

First Coast News reached out to Bean for an interview or a comment regarding the bill, but haven't heard back.

Governor DeSantis issued a statement Thursday. "With the passage of HB 1, the Florida Legislature has answered Governor DeSantis’ call to uphold the rights of our state’s residents while protecting businesses and supporting our brave men and women in law enforcement. This legislation strikes the appropriate balance of safeguarding every Floridian’s constitutional right to peacefully assemble, while ensuring that those who hide behind peaceful protest to cause violence in our communities will be punished. Further, this legislation ensures that no community in the state engages in defunding of their police. The Governor looks forward to signing HB 1 into law."

Gov. DeSantis is expected to sign the bill into law possibly as early as next week.

State Representative Angie Nixon, who represents part of Duval County, previously called HB 1 an attack on Black lives. She filed a bill in response to HB 1 that would stop law enforcement from using military-grade equipment, like tanks and tear gas, against peaceful protestors.

Two Republicans in the house, however, rolled out their version of the bill in early January in response to the insurrection at the United States Capitol, they said.