Lawmakers, local, state and federal law enforcement agencies weigh in on the threats made about potentially violent protests in every state capitol. 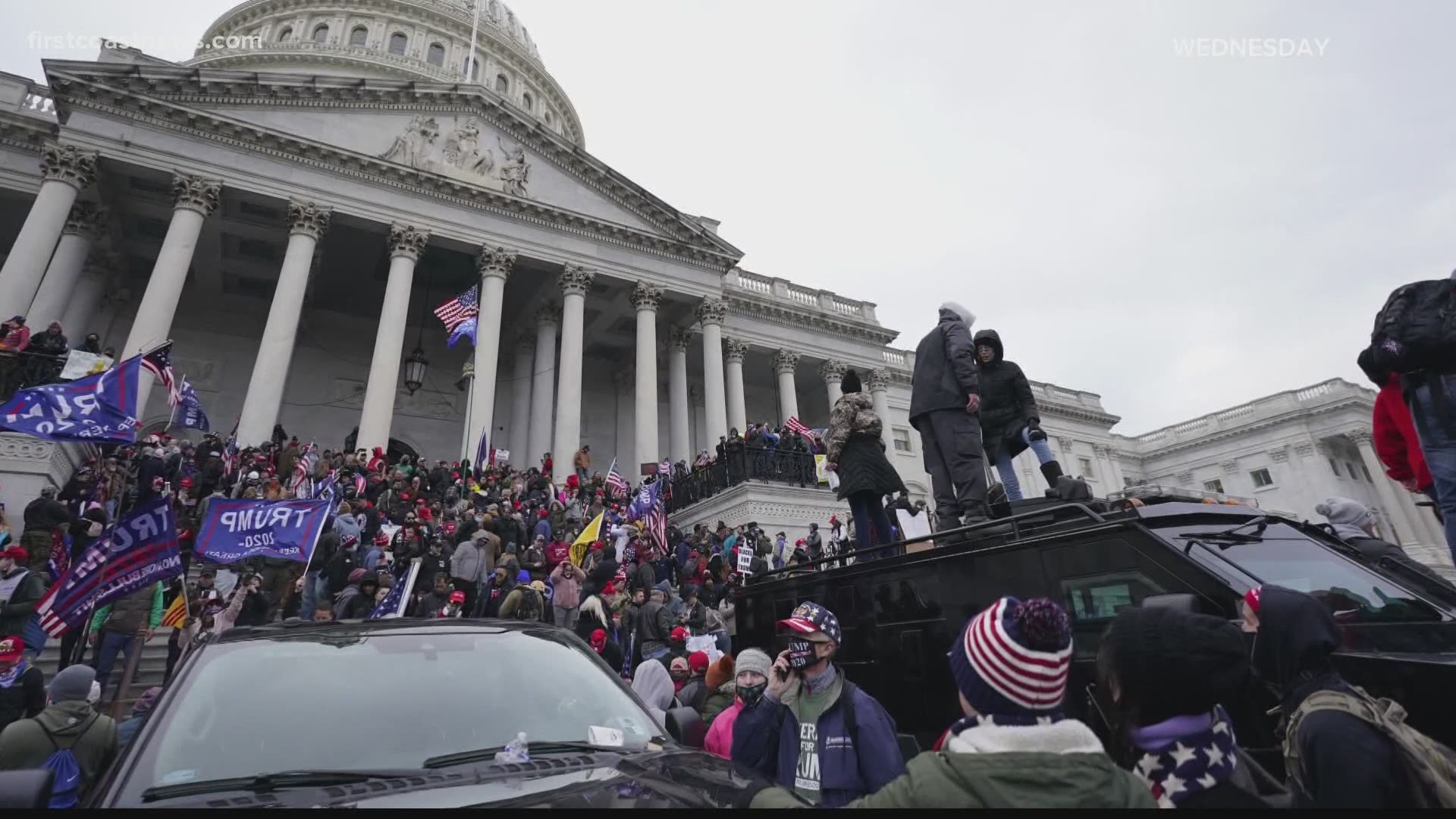 TALLAHASSEE, Fla. — Lawmakers and law enforcement across the country are on alert, preparing for potential armed protests.

It comes after the FBI sent a memo to law enforcement across the country warning of potential armed protests at all 50 state capitol buildings from Jan. 16 through Inauguration Day.

The FBI also said it has received information about a group calling for the "storming" of state, local and federal government courthouses and administrative buildings if President Donald Trump is removed from office before his term is up.

"It's very unnerving, and it's a fear for my life, but at the same time, I'm mad," Nixon explained. "It's very unsettling to, to think that there are some folks that are that upset with the process, which is a legal process, and that they actually want to bring harm to elected officials ... and t's not it's very unpatriotic, honestly," she said.

According to Nixon, she and fellow representatives have talked about the potentially violent protests.

"Security here is taking it very seriously. We're staying in conversation, reminding each other to be diligent Safe, vigilant and just to like, you know, just be aware of your surroundings," Nixon said. "Honestly, take off political bumper stickers, so that you can just maintain the safety of yourself and your family."

"Don't get me wrong, I'm a community organizer. So, I have been involved in protests for a bit of the past 10 years. Let's be clear, what happened in Washington, D.C. [Wednesday] was not a protest. That was an insurrection," Nixon said. "That was unpatriotic individuals who were upset that the person that they, you know, look up to is no longer going to be President of the United States."

Republican Representative Bobby Payne of District 19 in Florida said he doesn't have too many concerns about the possible protests.

"I feel very confident, after being here for four years, in our Capitol Police, our House Sergeant at Arms, our security and our local agencies that you know, like FHP, or FWC or even Tallahassee Police Department that they can handle most anything that comes our way," Payne said. "We just want to make sure things don't get out of hand and that we have damage done to the buildings or structures are our safety of individuals."

Payne said local officials are currently meeting with the Capitol Police in Tallahassee, preparing for any possible issues.

"I would say that people need to step back and let a little heat get out of the emotions at this point in time that the level of divisiveness that we're seeing throughout the nation right now is really fueled by a lot of different groups," Payne said.

"We saw the protests this summer where there was a tremendous number of damage, but billions of dollars of damage in buildings being burned. Unfortunately, the protests last week, the invasiveness of what happened at the Capitol was was was a horrendous situation," Payne said.  "I pray that our country can unite and that our new leadership will take the opportunity to make sure that these type of things aren't happening, and that we, as citizens, find a greater respect for each other."

Florida Senator Keith Perry (R-08) also said he is confident in the law enforcement at the state capitol.

"The Capitol Police, Senate Sergeant's office, and Florida Department of Law Enforcement are aware of the situation and I am confident in their ability to keep our state capitol and our staff safe," Perry said in a statement.

"Sergeant Kelly is a career law enforcement officer and former FDLE Special Agent who works in close coordination with Capitol Police and FDLE to monitor any potential threats to the capitol. Florida’s law enforcement professionals will not only protect our staff at the capitol but our citizens throughout the entire state," Perry continued in the statement.

The Florida Department of Law Enforcement, which the Florida Capitol Police falls under, said it routinely works with federal, state and local agencies to ensure security at Florida's capitol, and these threats are no different.

"We are aware of the information regarding possible protests and violence at state capitols. FDLE and Capitol Police continue to monitor the national situation and analyze information relevant to public safety," FDLE said in a statement.

The guardsmen will help with crowd management, traffic control, crisis response and asset protection. The D.C. National Guard will direct the Florida National Guardsmen of their duties.

Today, @FBIWFO Assistant Director in Charge Steven M. D’Antuono delivered the following remarks during a press briefing at the @TheJusticeDept regarding the January 6 violent activity at the U.S. Capitol. https://t.co/MnnOpVh4PM

The Georgia Bureau of Investigations said it is aware of the FBI's memo. Georgia's Information Sharing Analysis Center is monitoring activity, according to a spokesperson with the GBI.

"We are in communication with our partners and will continue to do what is necessary to ensure Georgia is safe and secure," GBI said in a statement.

First Coast News also reached out to some Georgia lawmakers, but have not heard back yet.

First Coast News Crime Analyst Mark Baughman said across the country, local, state and federal agencies are working together to monitor and respond to potential threats.

"They're monitoring all the Internet access that's online," Baughman said. "They're going to have to continue to do that for multiple days in advance, and even afterwards. People like to get online. They like it. They think they have some anonymity on there," Baughman said.

Baughman said they will use facial recognition, cameras and plain clothed officers to help leading up to the potentially violent protests and the days they possibly happen.

”It's hard. It's not easy for law enforcement," Baughman said. "They're trying to abide by people's rights, but at the same time, they have to get to protect the country and protect the buildings, you have to protect property, life limb, you know, those are the things that they're sworn to do."

Jacksonville Sheriff Mike Williams said the Sheriff's Office has been getting tips about potential events surrounding Inauguration Day. He said they are collecting those tips and looking for the credibility in the tip and then following up.

Williams said there have not been any specific threats yet, but there has been talk about potential protests. He said he doesn't think that is definite as of yet.

"It's something that we're paying attention to by the minute so that we can ramp up should it be necessary, and be in a good posture to respond," Williams said. "Keep in mind, you know, people have the right to protest peacefully all day, every day."

"We'll continue, as we did all summer to support that, right. However, when you break the law, we're going to respond to that. I think that's where you have to draw the line in the sand," Williams continued. "So, again, we'll continue to monitor that we may see some things develop in terms of protest or, you know, around the inauguration, and that's something we're paying close attention to every day."

The FBI locally in Jacksonville echoed Williams' statements, saying they are sharing whatever information they get with the state capitol.