Hurricane Irma: A look back at the storm's path and intensity four years later

As this storm passed west of Jacksonville as "just a tropical storm" the city's downtown recorded historic flooding. 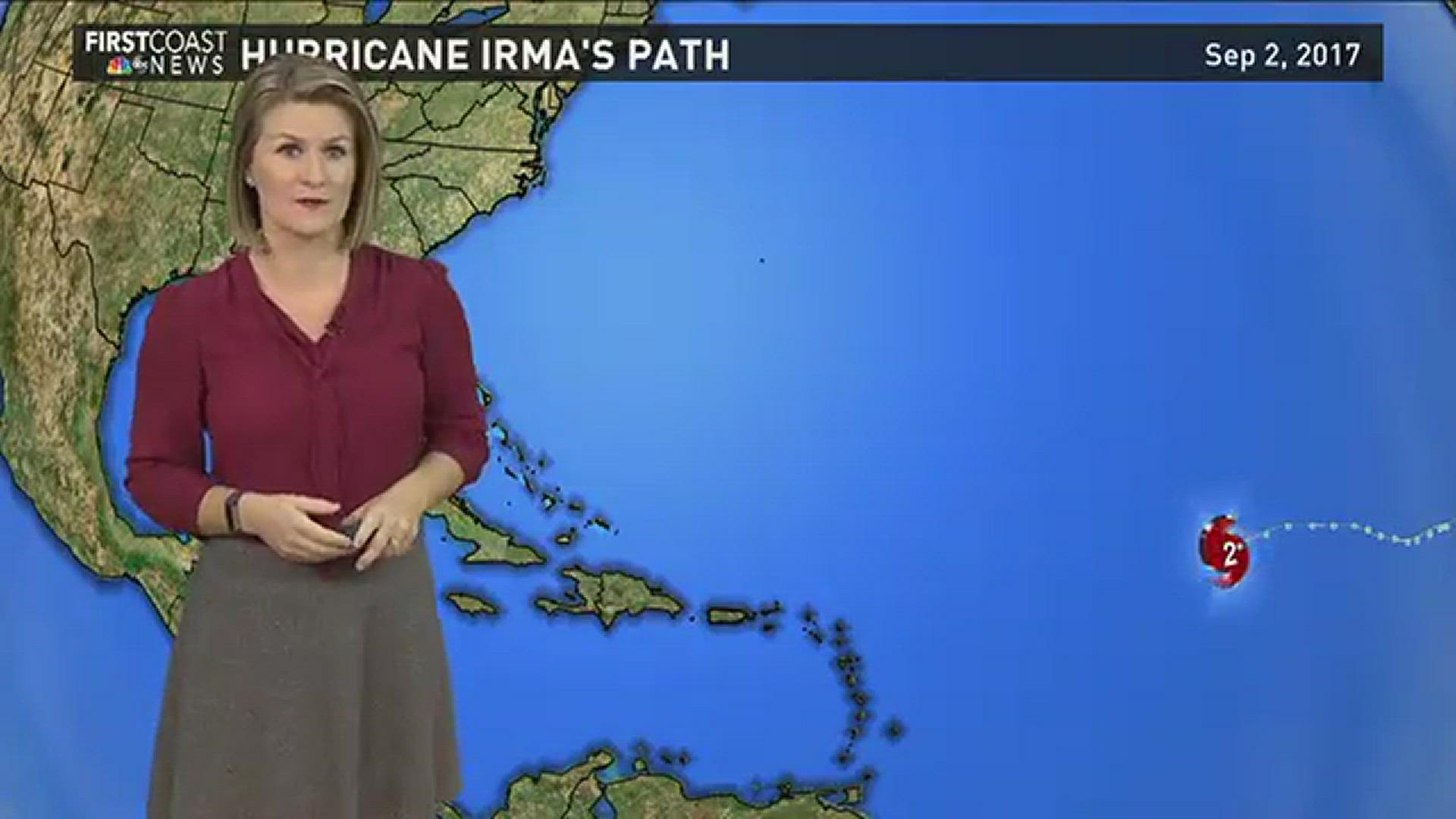 The name perks up ears across Jacksonville and there's no doubting why.

Hurricane Irma was responsible for one of the worst flooding events in the River City's 225+ history. On top of the high waters, northeast Florida experienced hurricane-force wind gusts and a few tornadoes causing damage to homes and businesses, along with widespread tree and power line damage.

In August of 2017, a tropical wave moving off the west coast of Africa quickly proved it was a force to be reckoned with. It became a tropical storm on August 30th gaining the name Irma.

With maximum sustained winds of 185 miles per hour, Irma became the strongest storm on record to exist in the Atlantic Ocean outside of the Caribbean and Gulf of Mexico. It broke the record for the longest of any cyclone in the world since 1932 to maintain that intense of winds -- for 37 hours straight and it spent three consecutive days as a category 5 hurricane.

Credit: WTLV
Hurricane Irma makes landfall at Cudjoe Key in the lower Florida Keys as a Category 4 storm with 130 mph sustained winds. It was the first major hurricane to hit Florida since Wilma in 2005.

"The occurrences of Harvey and Irma, making landfall within two weeks of each other, were the first time in recorded history that two category 4 or higher hurricanes struck the U.S. mainland in the same year," according to NOAA.

Credit: WTLV
Hurricane Irma makes its 7th (and final) landfall near Marco Island, FL as a Cat 3. Maximum sustained winds of 111 mph. Gusts of 128 mph based on a storm spotter, and a 142 mph gust measured at the Naples Airport.

Irma passed Jacksonville as "just a tropical storm" but brought significant impacts to the First Coast.

On top of the nor'easter event already backing up the St. Johns River ahead of this approaching system, the heavy rains and surge from Irma added up to historic flooding in the area. Flooding was reported on gauges at most of the rivers in northern Florida. Even major or record high water levels were reported at rivers across Bradford, Clay, Marion, Flagler, Duval, Putnam, St. Johns, Nassau, and Alachua counties.

Some people who experienced the storm said the flood waters came in fast and gave people who were in the area little time to prepare. The water rushed into the city's streets reaching 5 feet deep in some locations.

The report goes on to explain, "The [gauge] at the I-295 bridge on the south side of Jacksonville measured a peak water level of 5.3 ft MHHW, while gauges at Southbank Riverwalk in Downtown Jacksonville and at Racy Point recorded peak water levels of 4.9 ft MHHW and 4.0 ft MHHW, respectively."

"As an illustration of the combined effect of storm surge and rainfall runoff, observations from a USGS station in downtown Jacksonville showed that salinity within the river gradually increased from less than 5 parts per thousand (ppt) on 8 September to about 30 ppt (just a little less than the average salinity of the ocean) late on 10 September. These data indicate that the initial water rises were likely due to easterly winds ahead of Irma pushing seawater upstream in the St. Johns River."

"However, the USGS data then showed salinity decreasing rapidly back to normal levels at the downtown site on 11 September, while the water level at the site continued to increase and reached its maximum about six hours after the salinity peak. This suggests that the freshwater input from rainfall runoff was also a significant contributor to the flooding that occurred along the St. Johns River."

Impacts were felt across southeast Georgia as well. Major flooding was seen in St. Simon’s Island and along the Satilla River. Rainfall totals checked in between 5 and 10 inches for coastal Georgia, with the highest rainfall amount for the state of Georgia as a whole measured in Nahunta in Brantley County of 10.34 inches.

Credit: WTLV
On September 11, 2017 Irma passed between Tampa and Orlando as a category 1 storm. It then "weakened" to a tropical storm about 20 miles west of Gainesville. By the afternoon, its center moved over south Georgia just west of Valdosta.

Irma is just another example of why meteorologists urge folks to NOT focus on the cone alone. Impacts from tropical systems stretch far outside of where the center of a storm tracks. This is why it's critical to stay tuned to updates and Jacksonville's Most Accurate First Coast News Weather Team as we break down what you can expect across the area neighborhood by neighborhood.