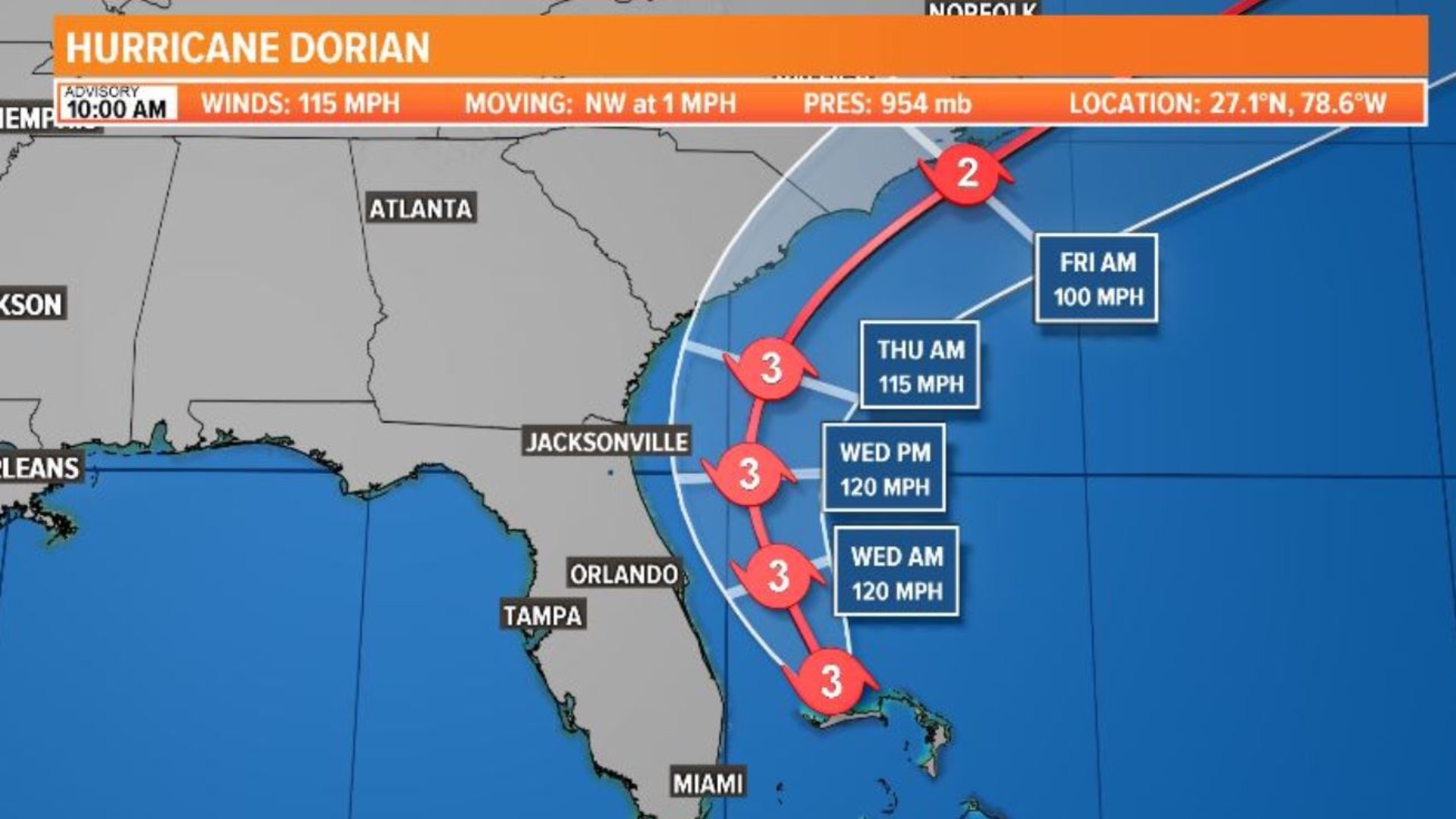 Dorian hit the Bahamas as a strong Category 5 hurricane with sustained winds of 185 mph. By the Tuesday morning, it was reduced to a 110 mph Cat 2. Still a dangerous hurricane, but that is a significant drop in strength.

Here are the 4 factors working to weaken Hurricane Dorian.

The first factor was that impact with the islands in the Bahamas.

When the eye of a tropical system moves over a land mass, it cuts off some of its fuel supply. Hurricanes get their energy from the warm ocean waters, instead of fronts and troughs like the northern latitudes.

Dorian made two landfalls in the Bahamas. First on Great Abaco, and then Grand Bahama. Small landmass's, but they still have an impact. Especially Grand Bahama. That Islands east/west orientation, along with the east/west movement of Dorian, meant that it was over land for an extended period of time.

As a result of that land interaction, Dorians eye was disrupted, thereby weakening the entire system.

After Dorian's impact with Grand Bahama Island, it stalled out in the waters just to the north. The wind circulation, and the low central pressure of the storm causes the waters below to be extremely agitated.

Since a tropical system uses warm water as its fuel, the cooler water on the surface of the ocean causes some further weakening. This appears to have happened to Dorian during the very long stall it had on Monday.

Wind shear is a drastic change in the speed or direction of the winds with height. Hurricane Dorian is a stacked low pressure system extending from the surface, all the way up to 40,000 feet.

It was weak wind shear that allowed Dorian to become a powerful category 5 hurricane before striking the Bahamas. Now there is a more sheared environment around the system, which is making it difficult for Dorian to reform its eyewall.

The National Weather Service has doubled the amount of weather balloon measurements from twice per day to four for the duration of Dorian. The fleet of NOAA weather satellites have also been able to diagnose wind shear issues that lie ahead of the storm.

Dry air may be the most influential factor in keeping Dorian pinned down and maybe even further weakening the system.

A hurricane is a delicate balance of circulating moist and dry air throughout the storm. There are areas that you would expect to find dry air, like the eye, and the outer edge as the exhaust from the hurricane gets expelled outward from the center and descends on the outside.

If dry air gets into the eye wall, it can prevent the circulation from being organized well enough to allow the hurricane to power up.

There is a large batch of dry to the west and northwest of Dorian, over the continental U.S., as well to the north and northeast due to a large dome of high pressure over the Atlantic.

That dry air has clearly been eroding the western side of Dorians eyewall throughout the morning so far Tuesday.

With these 4 factors impacting Dorian, why is it not forecast to dissipate?

The main reason is that it is entering one of the warmer parts of a warm ocean current called the Gulf Stream. That may be enough to at least resist the negative forces.

As of the 11am update from the National Hurricane Center, Dorian is forecast to stay in the category 2 hurricane range for its trip along the east coast over the next three days.

RELATED: #OpenNowFCN: Your guide to open stores, restaurants and more