History of redlining in Jacksonville leaves long-term impacts on wealth 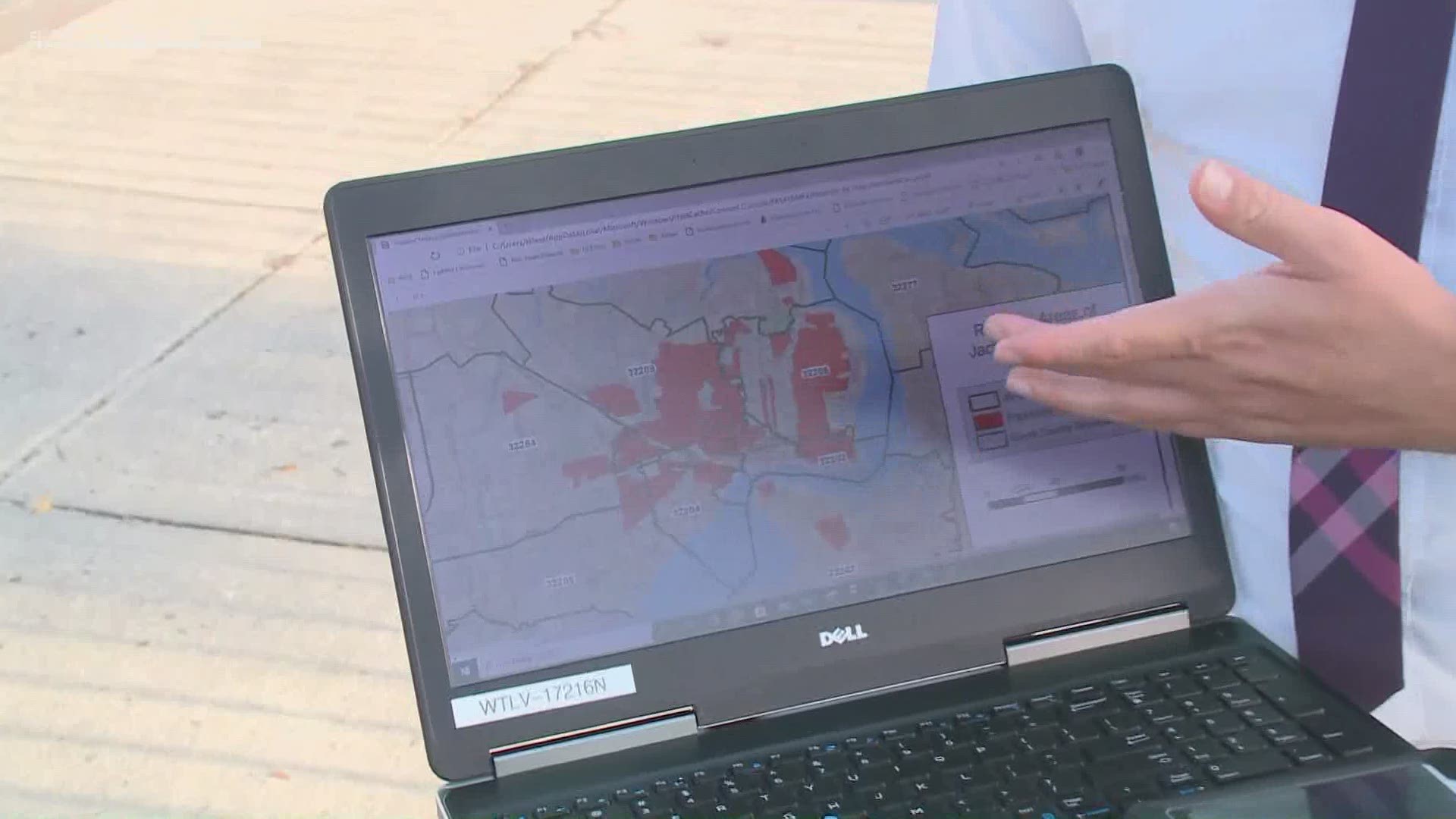 “I just felt [the appraiser’s] negative energy in my home, but I didn’t think it would be as bad as it was,” Ortega homeowner Abena Horton, who shared her story with First Coast News about claims of racial discrimination in housing.

Horton and her husband say their home’s appraisal jumped 40% after, as they put it, the couple removed all traces of Blackness from their home.

They live in the high-end Ortega neighborhood.

Housing discrimination has a long history in Jacksonville, including how the historic act of community “redlining” creates long-term wealth gaps across different neighborhoods.

A map of Jacksonville in the 1930s shows neighborhoods like the Eastside were marked inside a red line. It’s more than just a line on a map, it shaped city history.

The modern-day map above was created by UNF researchers Caroline Howard and Monica Murray for their research project, called "A state-sponsored system of segregation."

”Banks were caught redlining, and what that meant was essentially drawing a red line around black neighborhoods and not providing mortgages,” Garrow said.

The practice of redlining is now illegal but the effects continue into modern-day.

“I was shocked to learn- what is the lived experience of so many people of color- that the impact of redlining continues to adversely affect American cities today,” Howard wrote to First Coast News.

The result of her study shows that neighborhoods in Jacksonville remain significantly racially and economically segregated.

She says based on her research, "a cross-disciplinary perspective is needed" when urban planning decisions are made.

A scientist also found that communities of color, including those in Jacksonville, are disproportionately exposed to higher temperatures during heatwaves.

Jeremy Hoffman, a scientist at the Science Museum of Virginia and his team researched over 100 metropolitan cities around the U.S.

Jacksonville was in the top five cities with temperature disparities.

“This has impacts on energy use, human health, and a number of socioeconomic outcomes,” Hoffman said.

The study was published early this year in the journal Climate.

The heat, paired with poor infrastructure, can also leave residents of this area dealing with poor health, Hoffman says.

“You can start to see how people with pre-existing conditions, inefficient energy use, that might be exacerbated by these things acting in concert,” Hoffman said.

Garrow, who has practiced in fair housing law for many years recommends weighing your options if you feel you've experienced discrimination.

“If you think you’ve been denied admission, the right to see a place because of classification, the Fair Rights Act may apply to you, but you should talk to a lawyer,” Garrow said.

Filing a complaint with the U.S. Department of Housing and Urban Development is another option.