Demonstrators in Tampa march in solidarity with Cuban people

Protesters in support of the people marching against the Cuban government walked to the intersection of W. Columbus and N. Dale Mabry. 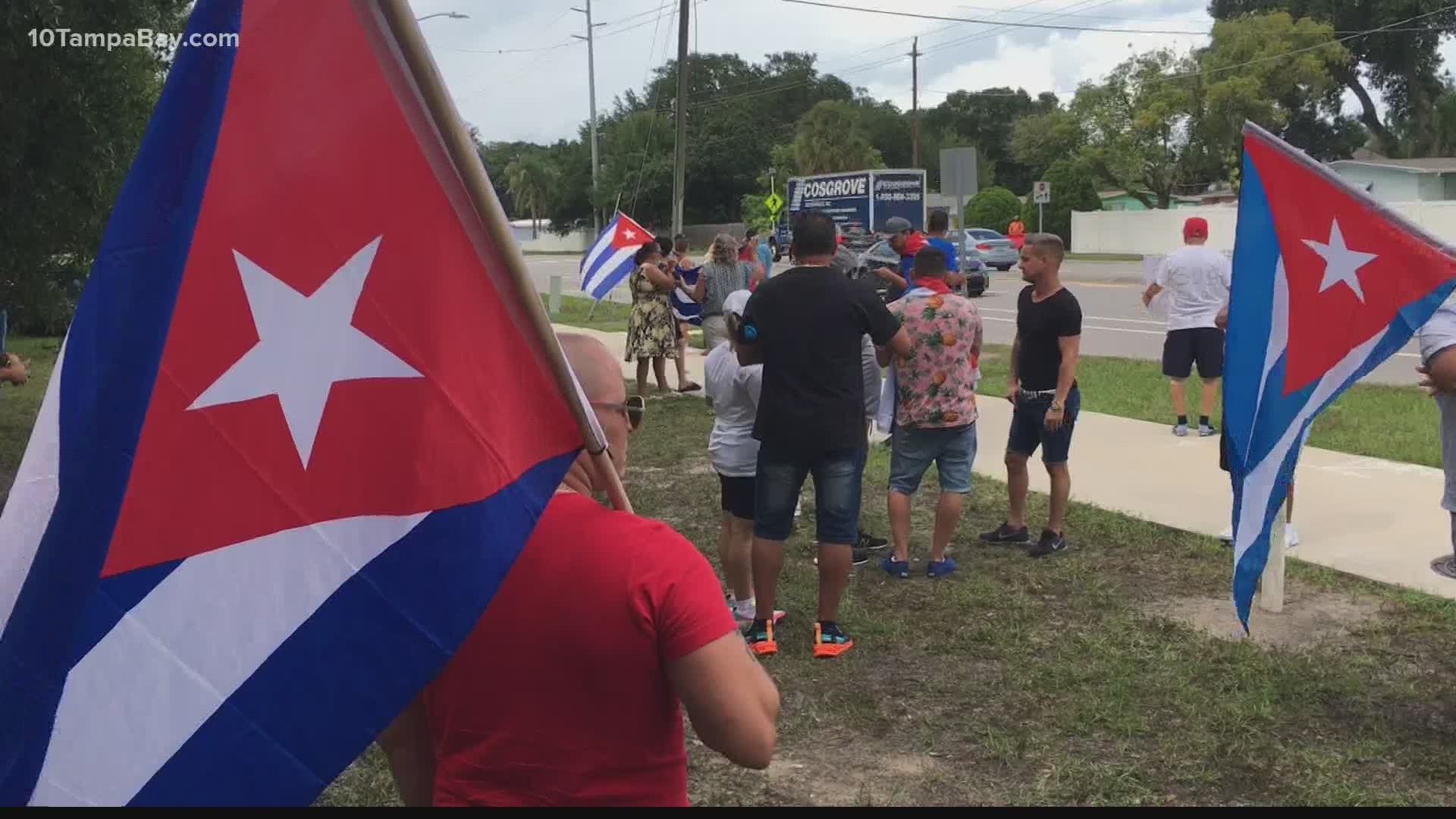 TAMPA, Fla. — Protests in Cuba are spilling into the streets around Tampa Bay.

Generations of people from the area still have relatives in Cuba, and many are watching what is happening there with enormous concern.

For the past two days, demonstrators have taken to the streets in support of those risking far more — demanding freedom. Tampa has deep ties to Cuba and a long history dating back to the original cigar factories and families that came here to escape communism.

Ybor City and other parts of Tampa still reflect that heritage.

“In my lifetime I’ve never seen anything like this. So, my heart with my people,” said Yanko Macedo, who was born in Cuba and is now the owner of Tabanero Cigars, a thriving business in Ybor City.

Macedo and others wonder what’s happening to protestors there. He’s heard from colleagues in Nicaragua that the Cuban government is setting up roadblocks, has shut down the internet. Communication, he says, has been difficult.

RELATED: 3 people arrested as Cuba demonstrators attempted to get on I-275

Another group of demonstrators for #SOSCuba headed to this intersection from Al Lopez Park. They have W Columbus fully blocked #SOSCubaLibre @10TampaBay pic.twitter.com/yQTWAcM6i8

#SOSCubaLibre demonstration spills into the intersection of W Columbus and N Dale Mabry. @TampaPD here on scene controlling traffic. The chants “Ya Se Acabo” (It is over) and “Cuba Libre” (Free Cuba) loud and clear @10TampaBay pic.twitter.com/iUXdDelFxA

Ralph Fernandez, a prominent Tampa defense attorney, saw his family flee Cuba when he was just 8 years old. He’s long been an outspoken opponent of the communist regime. He believes maybe decades of sanctions are finally learning to a post-Castro regime change.

“It’s just right now what happens the time is right for change,” Fernandez said. But he’s concerned about the desperate measures he says the communist government there could take.

“Cuba can cut off communications to the exterior,” Fernandez said. “And they are willing to bury the people of Cuba in order to preserve power.”

Local Cuban Americans are divided politically when it comes to U.S. sanctions. Some say keep the pressure on, believing it’s working. Others say the communist regime isn’t suffering, but the people are and that relatives are seeing shortages of food and medicine - exacerbated by COVID-19.

There is agreement, however, among virtually all Cuban Americans when it comes to being encouraged by what they’re seeing in Cuba. There have been unprecedented, public demands for freedom like the likes of which they haven’t seen in the past 60 years.

Local demonstrations, they say, are aimed at letting those in Cuba know they’re not alone, and more are being planned to show that support in the coming days.

On Wednesday, U.S. Rep Kathy Castor joined Tampa Bay area leaders to speak in solidarity with the people of Cuba, calling for a peaceful transfer of power in the country.

“The United States of America should stand with the people of Cuba now to encourage and work for that peaceful transfer of power," Rep. Castor said.

The protests are happening in South Florida, too. As NBC Miami reports, demonstrators shut down a major Miami-Dade area highway on Tuesday.

South Florida's Cuban American community also rallied Sunday and Monday night, taking to the streets of Little Havana and calling for freedom in Cuba, according to CBS Miami.

#BREAKING - The Palmetto Expressway (SR-826) has been shut down in both directions near Coral Way and SW 32nd Street as protestors voicing their support for the people of Cuba went onto the expressway. pic.twitter.com/8cCFNmL5m7