JACKSONVILLE, Fla. — A fragrance factory on Jacksonville's Westside rejected the idea that it's the source of the numerous odor complaints made by residents of the Murray Hill area.

A December letter obtained by First Coast News was sent on behalf of International Flavors and Fragrances, a Lane Avenue factory, which was cited late last year by the city of Jacksonville's Environmental Quality Division for odor violations.

In the letter, attorney Stacy Watson May said that because IFF remains in compliance with its state-issued Title V air permit -- the kind required of major sources of air pollution -- the factory "could not be responsible for the odor complaints in the Murray Hill neighborhood." (The company declined requests for comment.)

May said the company's "sensor technology and in-person evaluations have yet to identify a connection between the odor complaints in the Murray Hill neighborhood and IFF’s facility" and noted IFF is "only one of several manufacturing facilities in the area."

May also argued that the fact that the company is in constant production is inconsistent with the intermittent odor complaints from residents in Murray Hill.

First Coast News has been following this story since last year as people continue to report a noxious chemical smell from Riverside to Ortega.

In the December letter, May argues that IFF has operated in Jacksonville for many years and it's only recently that multiple Murray Hill residents have reported objectionable odors at their homes.

"IFF’s operations have not changed recently and we are not aware of any basis for the IFF facility to be the cause of the odors in Murray Hill," May writes. "Furthermore, the Murray Hill neighborhood is approximately three miles away, making it highly improbable that any odor from IFF could be responsible for the complaints there."

She added, "IFF will fully cooperate with the City’s investigation and we trust the City will work to identify the actual source of the objectionable odor..." 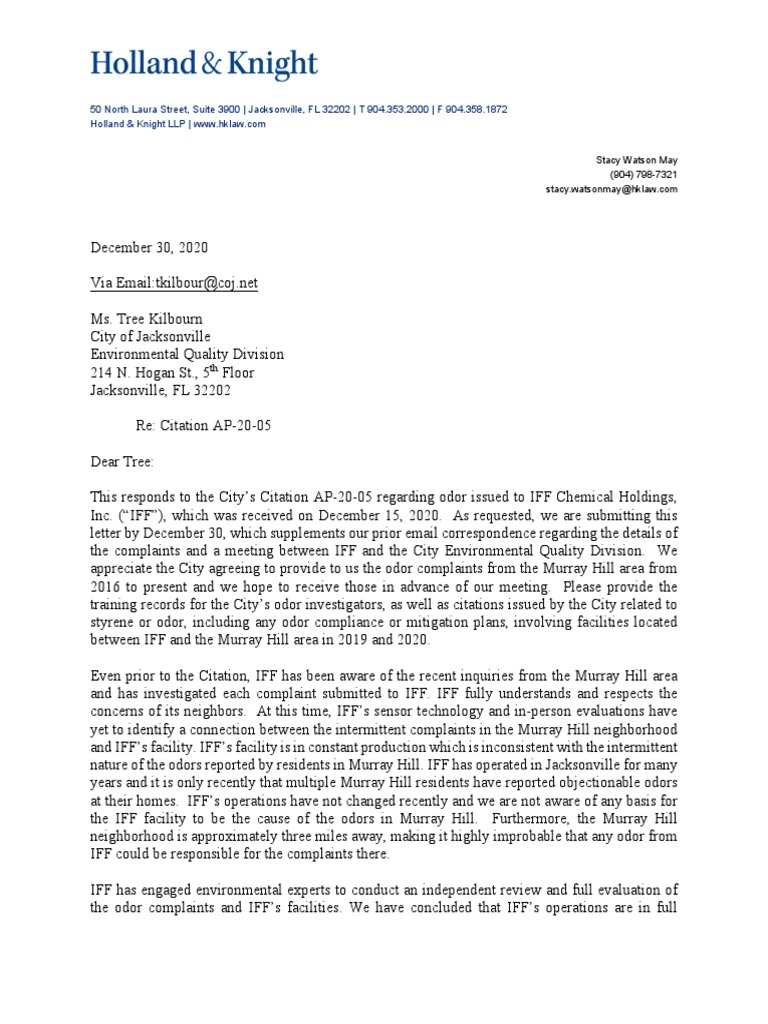 The reported odor is at the root of a new lawsuit, which hit a snag this week due to language technicalities.

The lawsuit was stricken by the judge just hours after it was filed. Attorneys plan to refile it this week.

According to District City Councilmember Randy Defoor's office, the city is taking enforcement action against IFF, but it's still unclear if the odor is coming entirely from their facility.