Until now, students have only attended school in-person two to four days per week depending on the grade level — the rest was supplemented online. 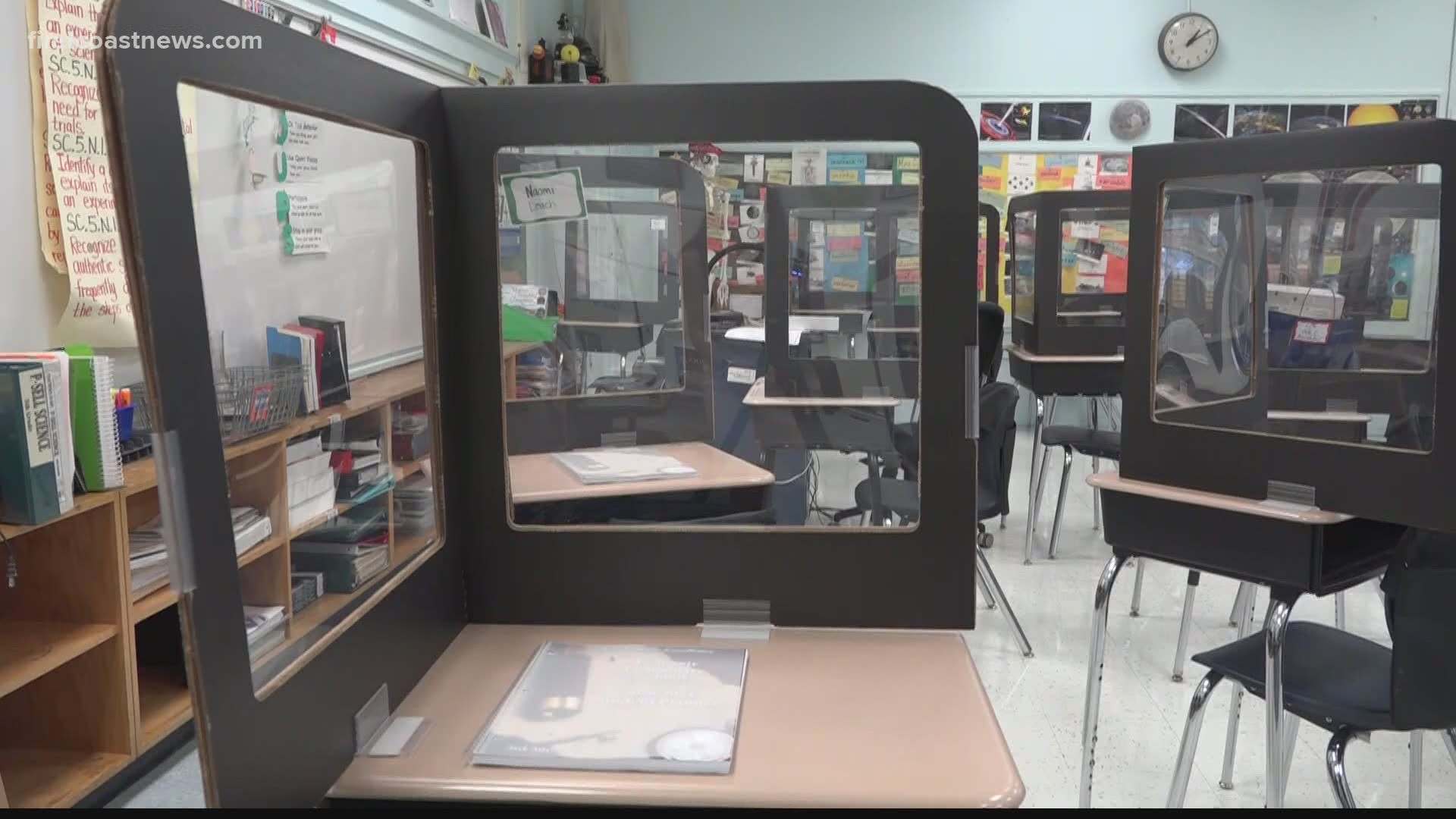 JACKSONVILLE, Fla — In a few weeks, Shannon Russell-Hinds will have more desks filled in her classroom than she's seen since last school year.

Russell-Hinds, an English teacher at Sandalwood High School, is one of Duval County Public Schools' middle and high school teachers bracing for impact as the school district's middle and high school students begin to transition back to daily, in-person learning. Until now, students have only attended school in-person two to four days per week depending on the grade level — the rest was supplemented online.

"More people means more problems in this context," Russell-Hinds said. "There is no possible way to socially distance in our schools if all boots hit the ground simultaneously."

Russell-Hinds said she expects to see more COVID-19 cases among students and staff when campuses are more populated, adding that social distancing has been hard enough with limited class sizes.

Starting Monday, the district will launch the next phase of its "bridge to reopening" program, transitioning students attending classes in-person from part-time to full time, five-days-per-week.

The move comes as a result of a "compromise" between the school district and the Florida Department of Education, a spokesman said.

The process is starting with sixth-graders, who previously attended in-person classes three days a week. The following week, seventh- and eighth-graders will transition to daily classes and the week after, high school students — who were only taking in-person classes two days a week — are expected to attend daily.

Still, with Duval Schools reporting at least 40 COVID-19 cases and more than 300 quarantine orders as a result, there are hesitations to bring more people on campus at the same time.

Earlier this school year, photos taken by students showed crowding across middle and high schools despite the alternating schedules.

The plan to bring students back to school full-time has changed over the last few months of the coronavirus pandemic.

Originally, the school district's back-to-school plan didn't involve a transition from a hybrid model to daily classes. Things changed in July, following an executive order from Florida Department of Education Commissioner Richard Corcoran which stated that state schools needed to be in a classroom five-days-per-week.

Despite experts saying Corcoran lacked the authority to proclaim any sort of mandate, Duval Schools still shifted its plan to better accommodate with the department of education's request. Board members said the changes and accommodations were sparked by funding concerns.

That's when Superintendent Diana Greene unveiled her bridge to reopening model, with a plan to transition all middle and high school students back to five-days-per-week by Sept. 8. That date ultimately was pushed after the School Board voted to delay Duval Schools' start date by 10 days.

The final shift to the plan was announced late last Wednesday, following a new waiver approval from the state. A spokesperson told the Times-Union that everything changed within a few hours following the department of education approving the school district staggering the move from a hybrid model to daily in-person classes by grade level instead of all at once.

"We asked for a phased return," Pierce told First Coast News. "In collaboration and compromise, [the department of education and Corcoran] agreed to our staggered phase-in philosophy, but wanted an accelerated timeline. Through an agreement with the commissioner, we did that."

The announcement only gave middle school teachers impacted two workdays to plan for the major influx of students.

In private Facebook groups, teachers have criticized the school district for keeping educators out of the loop when it comes to the multiple plan changes, expressing confusion and frustration over crafting lesson plans.

"It's the world that we live in, we have to navigate through that," Pierce said. "We're abiding by that [executive] order and collaborating with the department in terms of how we do that. We have to operate under the guidance and parameters we're given."

Another question the change brings to schools is how daily in-person instruction will affect schools' deep cleaning schedules. Until now, deep cleaning days took place on Wednesdays with all students participating in distance learning. High school teachers were also recently told they could teach from home on deep cleaning days.

The Times-Union asked the school district what the new schedule means for deep cleaning schedules.

“We’re re-evaluating the cleaning schedule,” district spokeswoman Sonya Duke-Bolden said. “We will be able to provide the specifics in the future.“

Teachers are also expressing concern as more students are added into the mix.

"It seems like we have a good balance in secondary school with the hybrid schedule," Andrew Mathis, a parent to a high school sophomore at Terry Parker High School, said. "I feel like the hybrid schedule is working to everyone's benefit right now, so I'm not in favor of changing to a five-day-schedule."

Mathis also teaches fourth-grade students at Oceanway Elementary School, which is unaffected by the schedule changes since elementary schools have been daily from the start of the school year.

"I feel like the low amount of infections among high school students in Duval County right now is probably due to the hybrid schedule that has been in place," he added.

“We’ve had a manageable experience with COVID-19 under the hybrid attendance pattern,” Superintendent Greene said. “A measured, phased return to having all students on campus Monday through Friday will be extremely beneficial in bridging to larger attendance in school facilities.”

For families who are second-guessing in-person learning now that the hybrid period is ending, the school district advises calling a student's school to see whether Duval HomeRoom would be an option.

The enrollment period for the district's virtual option that keeps students registered in their current school closed in August, but the district said special circumstances will be considered on a school-by-school basis, cautioning that it might be difficult to seamlessly transition to HomeRoom without losing certain electives and other pieces of the student's schedule.

Bringing all students back to the classroom at the same time does have some silver linings, students say.

Winston Seabrooks, senior class president at Ribault High School said he was both excited and nervous about the transition.

Seabrooks added that social distancing is tough in some of his classes.

"I'm in classrooms where there are 30 and 40 students, I go to a school where there's over 1,600 students projected," he said. "That's a lot of students coming from different places. I'm a little worried about what these next weeks will bring."