“To me, when you aim a firearm at someone and intentionally pull the trigger, that’s not reckless,” Chloe Carroll's father, Robert Holmes, said. 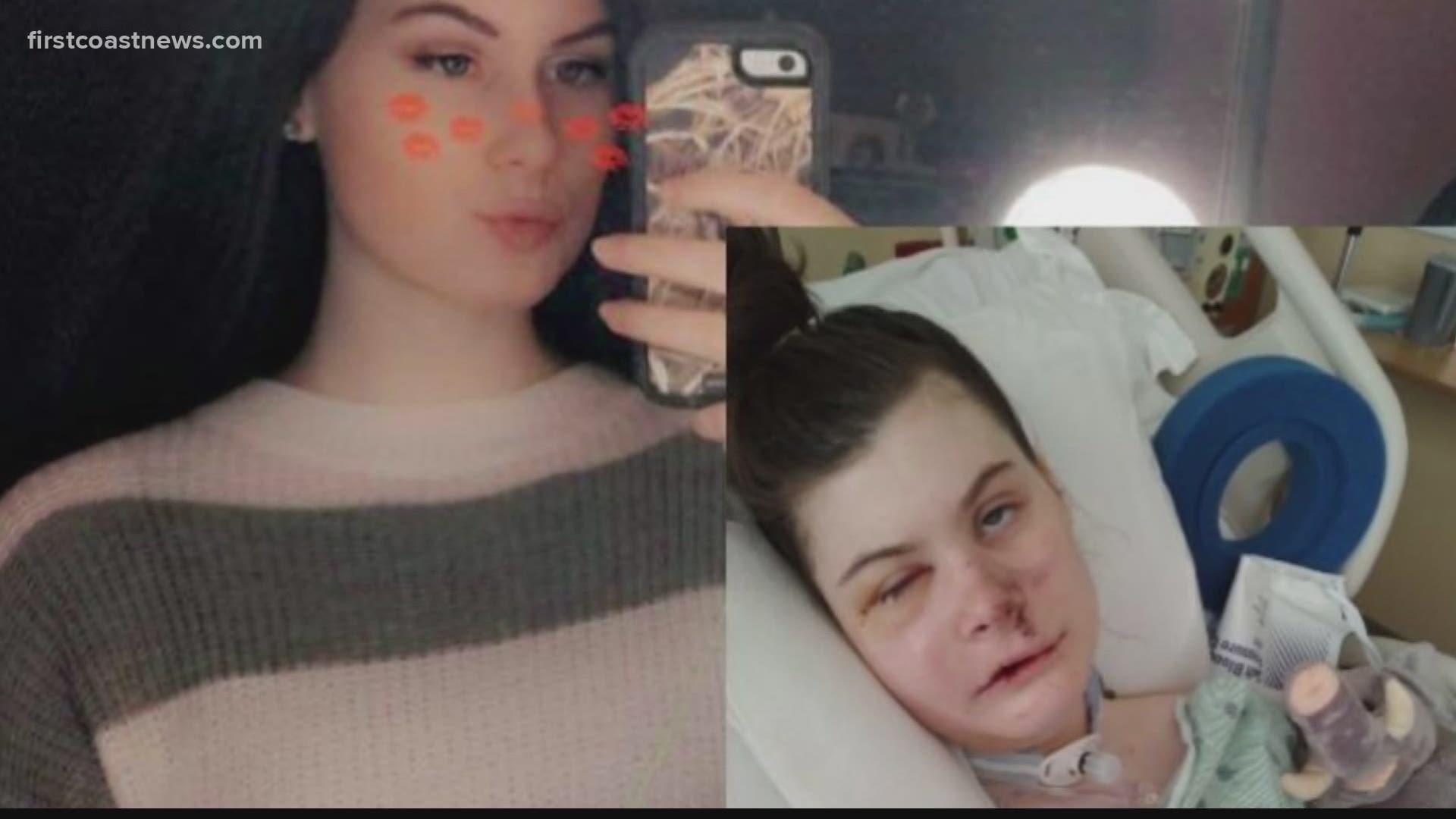 BRUNSWICK, Georgia — A Brunswick teen was shot the day after her 18th birthday and has a long road to recovery.

Update: The shooter's mother is coming to the defense of her son.

Chloe Carroll may have survived, but her life is forever changed.

A police report says Carroll was shot in the face on July 9. She will need several surgeries to repair damage to her jaw, cheekbone and eye socket, her family said.

Carroll is recovering at home but she and her family are upset the accused shooter had his charges reduced.

“He [the shooter] is able to eat solid food, he’s able to enjoy himself or whatnot, versus Chloe’s home now but she’s fed through a feeding tube,” father Robert Holmes said.

The shooter's mother says this is not a case of judicial injustice.

A sad story I'm working on today. The father of Chloe Carroll is calling for justice after his daughter was shot in the face in Brunswick, but a judge dropped most of the charges against the shooter. This story is only on @FCN2go at 6. pic.twitter.com/rSeCfnrQff

Holmes says the bullet shattered Carroll’s lower jaw and parts of the skull fractured up through her eye socket. It also blew out the palates that separate the nasal cavity from the mouth, he said.

Carroll, her boyfriend and the alleged shooter, Jakob Schott, were at the North Glynn Sports Complex on July 9 around 10:26 p.m.

“Jakob starts playing with the pistol and what not and decided to just aim it at each one of them and pulled the trigger,” Holmes said.

The night of the shooting, Carroll was airlifted to Shands Hospital in Jacksonville where she was stabilized. She had several surgeries and will need more to repair the damage, according to a GoFundMe set up by the family.

A Glynn County police report says a “visibly upset” Schott confessed to the shooting and seemed intent on further violence.

In the report, Schott said to an officer, “you need to handcuff me before I work up the courage to go for your gun forcing you to shoot me.”

Williams said her son was handcuffed at the scene for his own safety.

“Even the police officer who made that statement in his report said in court that he knew that it meant Jakob was distraught and contemplating hurting himself, and not that he was a danger to anyone else,” Williams said.

Williams says her son was a straight-A student that fell into the wrong crowd. He planned on attending Kennesaw State University but is now at home with an ankle monitor.

She claims it was Chloe Carroll’s boyfriend’s idea to take the gun. Carroll’s father said her boyfriend was at the park with the two when the incident took place.

Williams said Carroll and Schott were good friends, and the shooting was an accident and a stupid mistake because Schott thought the gun was unloaded.

A Glynn County magistrate court document obtained by First Coast News says four of those charges were dismissed by a judge. The remaining aggravated assault charge was bound over as reckless conduct.

Holmes was not present during Schott’s preliminary hearing but was upset with the outcome.

“To me, when you aim a firearm at someone and intentionally pull the trigger, that’s not reckless,” Holmes said.

A spokesperson for the Brunswick District Attorney’s Office says the reduction in charges was the judge’s decision, not theirs.

“The court bound over the charge of theft by taking a firearm and reduced the remaining count of aggravated assault to reckless conduct,” the DA’s office said.

The statement said the DA’s office argued against bail but the court granted a bond of $25,000 and conditions of no contact with the victim or any witnesses, a curfew, drug screens and no firearms in the home.

“If it was an inch one way or another she wouldn’t be here right now,” Holmes said.

In a statement, the District Attorney’s Office said it intends to present this case to a grand jury when possible. Convening of grand juries and trial juries is suspended due to the COVID-19 pandemic.