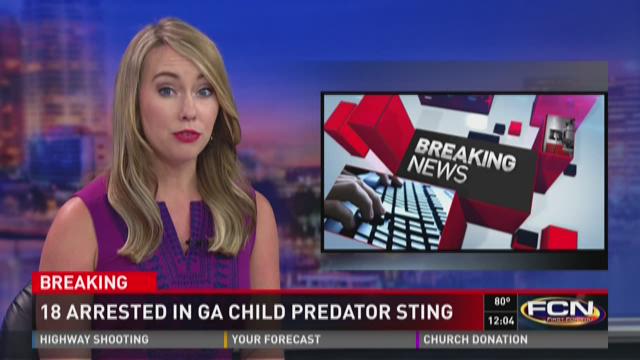 The operation took months of planning, but the 18 arrests were made during a period starting on Thursday, May 12. The suspects, who ranged in age from 19-58, traveled from areas around Brunswick and from North Florida to meet children for sex, according to police.

“"Our goal is to arrest people who do this, who are out to harm children." Georgia Bureau of Investigation Special Agent Debbie Garner said at a news conference.

The suspects were charged with computer or electronic pornography and Child Exploitation Prevention Act of 2007. Additional charges may be forthcoming, according to the GBI.

Five of the suspects are Jacksonville residents.

The purpose of the operation was to arrest those who communicate with children online and then traveled to meet them for sexual activity or exploit them by purchasing sex with a minor.

"The children in our community need people to keep them safe," said Glynn County Police Chief Matt Doering. "We will be their guardian angels. We will look out for them.”