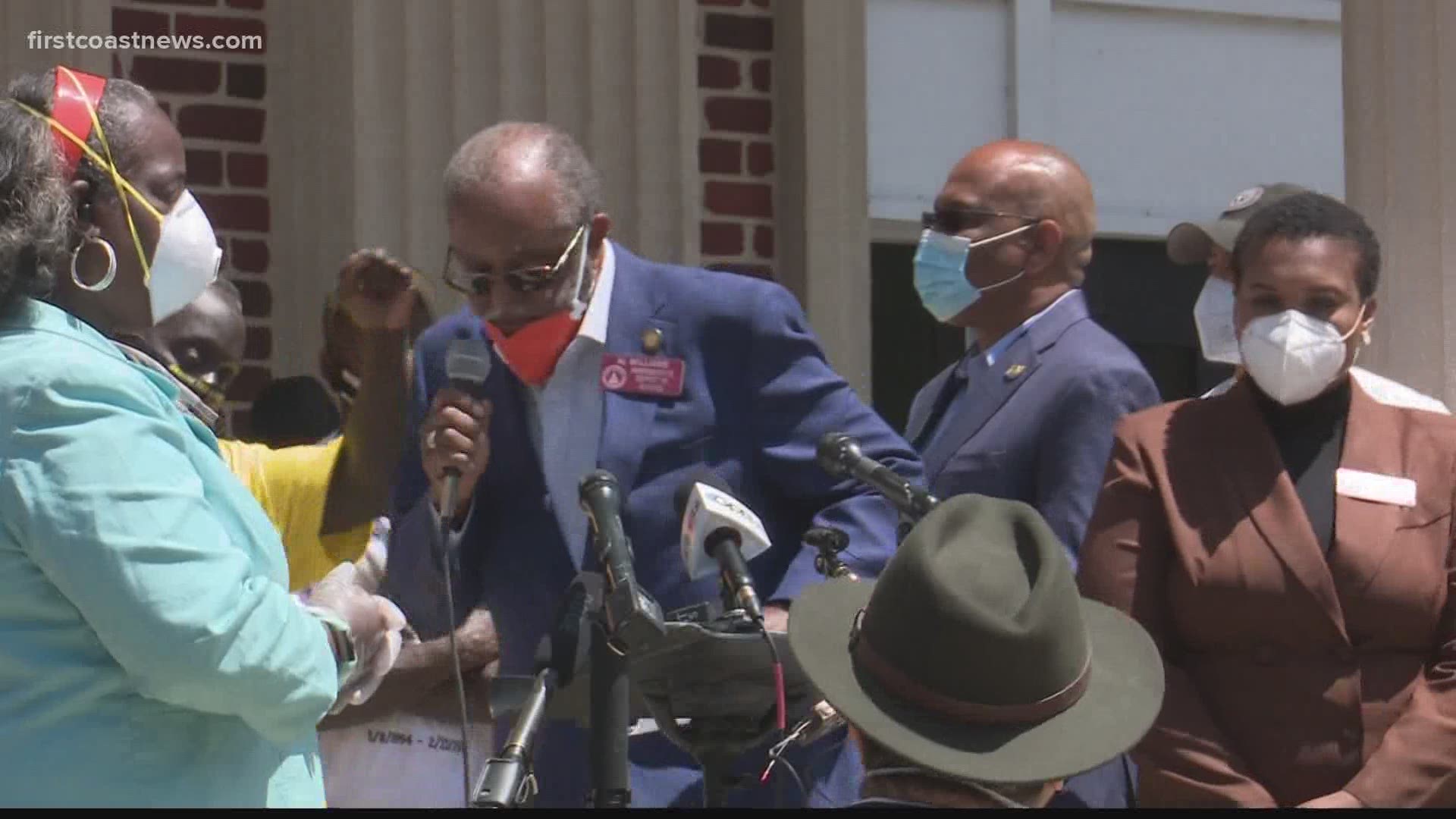 It’s also left many asking why more than two months have passed before Arbery’s killer was arrested. On Tuesday, the GBI released details about the handling of the case.

On February 23, 25-year-old Arbery was shot and killed by Travis McMichael after he and his father Greg McMichael confronted him, suspecting him of breaking into homes in the area.

The case was handed off to multiple district attorneys due to conflicts of interest.

Four days after the shooting, Brunswick DA Jackie Johnson requested the Attorney General to appoint another prosecutor because she had a conflict.

Greg McMichael, a suspect in Arbery’s death, worked as an investigator in Johnson’s office.

After receiving the letter, the Attorney General’s office learned Ms. Johnson contacted Waycross DA George Barnhill and he agreed to accept the case, the GBI said.

The GBI states that after Mr. Barnhill’s appointment, he and Ms. Johnson learned that Mr. Barnhill’s son worked alongside Greg McMichael on a prosecution against Arbery.

Mr. Barnhill held onto the case for several more weeks after making this discovery, according to the GBI.

The GBI says Barnhill provided an opinion to the Glynn County Police Department on Feb. 24 that he did not see grounds for an arrest of any of the individuals involved.

On April 7, Barnhill requested the Attorney General to appoint a new prosecutor stating he had a conflict of interest, confirming his son’s involvement with Mr. McMichael and Mr. Arbery.

The GBI states that Barnhill’s letter failed to disclose his involvement in the case prior to his appointment.

In a letter obtained by First Coast News, Barnhill stated that the shooting of Arbery was justified under citizen’s arrest and self-defense laws.

He also wrote there was a decent cell phone video of the incident, which has since gone viral.

After Barnhill’s letter was received, Hinesville DA Tom Durden was appointed to the case April 13.

On May 5, Durden requested the GBI investigate the Arbery shooting. Two days later, Greg McMichael and Travis McMichael were arrested for aggravated assault and felony murder.

This week, the Attorney General appointed Cobb County DA Joyette Holmes to the case, stating that her office had more resources to handle a case of this magnitude.

"The Attorney General is concerned that the actions of these offices in possibly misrepresenting or failing to disclose information during the process of appointing a conflict prosecutor to investigate the death of Ahmaud Arbery may have constituted unprofessional conduct under O.C.G.A. § 45-11-4 or other crimes.

In this case, Mr. Arbery was shot and killed in Glynn County, in the Brunswick Judicial Circuit, on February 23, 2020.  Four days later, on February 27, 2020, the Attorney General’s Office received a letter from Jackie Johnson, the District Attorney of the Brunswick Judicial Circuit, advising that she had a conflict and that she was requesting the appointment of another prosecutor.  Ms. Johnson wrote that the reason for the conflict was because the investigation into Mr. Arbery’s death involved Greg McMichael, a former investigator with her office.  Shortly after receipt of Ms. Johnson’s letter, this office was made aware that Ms. Johnson had contacted George Barnhill, District Attorney of the Waycross Judicial Circuit, and that he had agreed to accept the case.  This office confirmed with Mr. Barnhill and, pursuant to O.C.G.A. § 15-18-5, this office appointed Mr. Barnhill to prosecute the case on the same date Ms. Johnson’s letter was received.

Mr. Barnhill’s letter failed to disclose his involvement in this case prior to his appointment.  In her conflict letter of February 27, 2020, Ms. Johnson had advised that the Glynn County Police Department was “currently investigating” the shooting death of Mr. Arbery, and that she was requesting new counsel to advise the police. Unknown and undisclosed to the Attorney General, however, Mr. Barnhill had already provided an opinion to the Glynn County Police Department on February 24, 2020, that he did not see grounds for the arrest of any of the individuals involved in Mr. Arbery’s death.   He additionally stated his opinion to the Glynn County Police Department in writing that there was insufficient probable cause to make any arrests in the case and that he would be asking the Attorney General to appoint another prosecutor.

After receipt of Mr. Barnhill’s conflict letter, the Attorney General then appointed District Attorney Tom Durden of the Atlantic Judicial Circuit to this case on April 13, 2020.  On May 5, 2020, Mr. Durden requested that your agency conduct an investigation into Mr. Arbery’s death.  Two days later your agency arrested Mr. McMichael and his son for aggravated assault and felony murder for Mr. Arbery’s death."

The GBI is proceeding with this criminal investigation.  Anyone with information pertinent to the case is asked to contact the GBI at 1-800-597-TIPS (8477).