Chelsea Graham said she brought her dog into Laurel Oaks Animal Hospital in Kingsland, and he left with seizures and brain damage. The vet had no comment. 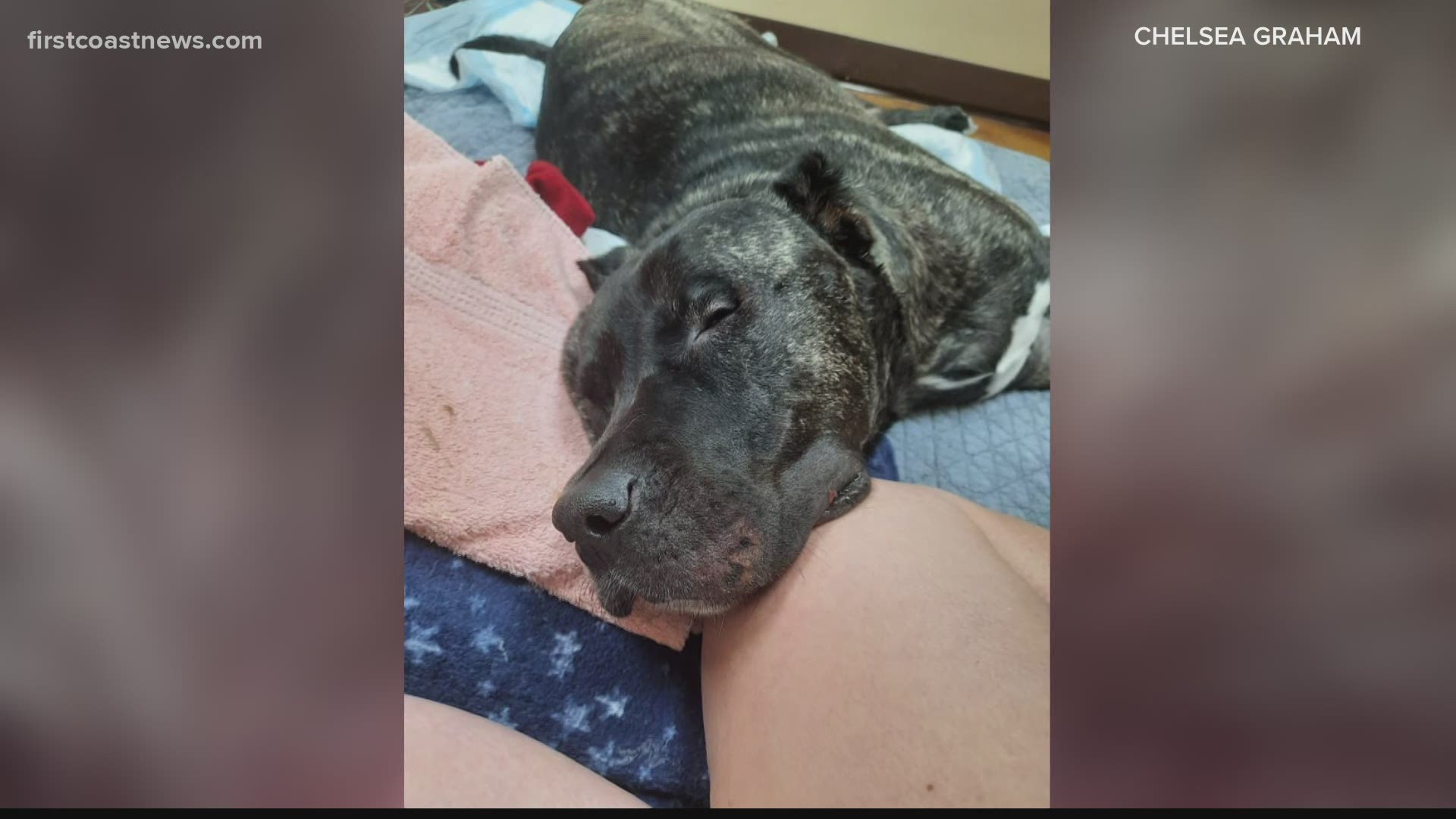 KINGSLAND, Ga. — Chelsea Graham said a routine trip to the vet in early July with her three-year-old Italian Mastiff turned into anything but, and now she's without her best friend.

Graham said she brought Draco to Laurel Oaks Animal Hospital to get a heartworm test and for shots July second.

“My dog was very difficult, and I understand that I let them know that," Graham said. "And he showed them that too."

According to vet records, Draco was "lunging at technicians" during that visit. Doctors prescribed Draco anxiety medication after that visit and had him come back July 5.

The medicine didn't work, records and Graham said. Vet records said Draco clawed off the muzzle. It also said they talked about sedation, but decided to try to restrain him instead, putting a comforter over him.

"These are medical professionals and I trusted them and I trust their opinions. So, I said 'Ok, go ahead and do it,'" Graham said.

Graham said she was petting Draco when she watched what happened next.

“He was pushed into a corner where he was held down and a slip lead of the leash was led through the crack of the door," she said. "There was a vet tech on the other side of the door."

"She was restraining him on the other side of the door with a leash, which ultimately ended up in him losing consciousness. His heart stopped beating," Graham said.

Vet records show the doctor got a blood sample and gave Draco his shots. Then, the doctor "noted he wasn't moving. From the entanglement of things over his face he was not breathing. He was carried immediately to surgery where we began resuscitation," the records say.

“I was panicking. I was panicking," she said. "I was there petting him and comforting him. And once I realized he wasn’t breathing, he wasn't ok, Dr. Clark was like, 'hang on,' and she was like touching his chest."

Graham said Draco suffered brain damage and started having seizures. Doctors monitored him for the next three days.

Graham reported the incident to the Georgia State Board of Veterinary Medicine and to Georgia's Consumer Protection Division. The complaint read in part:

"I brought in a perfectly healthy dog with nothing wrong with him and now he's dead and it's Laurel Oaks Animal Hospital's fault."

The Georgia State Board of Veterinary Medicine said it’s reviewing Graham’s complaint. The Consumer Protection Division of the Georgia Department of Law forwarded the complaint to the Professional Licensing Boards Division within the Secretary of State’s office, which it said handles complaints like Graham’s.

”I really want Draco's story heard, and I want to prevent anything like this to ever happen to anyone ever again," Graham said.

First Coast News tried several times to speak to the vet both over the phone and in person, but the manager refused to comment and said the vet's attorney's advised them not to talk. The manager did say, however, there are two sides to every story.

When Draco wasn't better after a few days, Graham took him to a critical care vet, Capital Veterinary Specialists. Its records show Draco "presented for supportive care after strangulation." Records there also said Draco arrived with a temperature of 108 degrees, and he "continued to have seizures."

"They said if the seizures don't stop within the next four hours on the night that they recommend putting him to sleep. The seizures didn't stop. So I ended up having to make the hard decision to put him to sleep," she said.

"My world revolved around him. I live by myself and when I didn't have anything to do, I was with Draco taking him places and now I feel kind of lost," Graham said.