In November, 8 years after the attack, First Coast News interviewed a survivor of the Fort Hood mass shooting. Army Veteran Patrick Zeigler lost part of his brain on November 5th, 2009 when he was shot point blank multiple times at the military post. 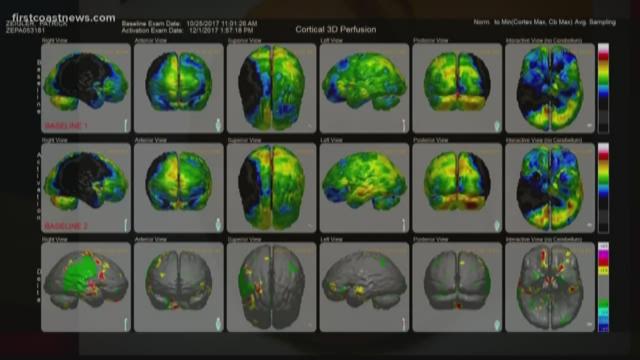 JACKSONVILLE, Fla. -- In November, 8 years after the attack, First Coast News interviewed a survivor of the Fort Hood mass shooting. Army Veteran Patrick Zeigler lost part of his brain on November 5th, 2009 when he was shot point blank multiple times at the military post.

In November, Zeigler tried out a Hyperbaric Chamber for the first time to treat a number of issues, like PTSD and Traumatic Brain Injury. After completing the 40 treatments he says he feels the difference mentally and physically.

Neither the V.A. nor insurance would cover the cost of the Hyperbaric Chamber. That's where the nonprofit 'The 22 Project' stepped in to help, footing the bill and taking high definition before and after scans to compare progress.

PREVIOUS STORY | Ft. Hood mass shooting survivor: they thought he was dead but he beat the odds

The of the lab and founder of 'The 22 Project', Alex Cruz, says there are significant changes to Zeigler's brain activity.

"After 8 years of dormant, low functioning brain cells we are seeing changes in the brain now," said Cruz.

Cruz shows the proof in 3D images showing the increase in brain function for Zeigler.

"The dark yellow shows brain activity, that's normal brain function, then you see the dark blue, how it spills over, now it's functionally normally, neurons are excited again and they're working again," said Cruz.

While the part of his brain that's missing will always be gone, the frontal lobe of Zeigler's brain shows a visible surge in brain functioning.

"That controls executive function, decision-making, motivation, so he will be inspired to do more," said Cruz.

We caught up with Zeigler, who says he plans to go back for further treatment in the future.

"There are tangible results from these treatments and it has such a positive impact on your mentality," said Zeigler.

He says he feels physically, spiritually, and mentally better. He also sleeps through the night again and says he is reaching a deeper REM sleep.

He hopes his story can inspire hope and courage in other veterans to contact 'The 22 Project'.

"It's like grace, human beings always help each other," said Zeigler. "Just reach out your hand and somebody will grab it. Just step outside because there is a whole country out there of people who want to help you."

The 22 Project hopes the V.A. and insurance companies will take notice of its need for veterans so they can help with the cost.

The Hyperbaric Chamber treatment helps with a number of other wide-ranging conditions, including individuals on the autism spectrum, athletes who've suffered concussions and those prone to stroke.