Former Secretary of State brings laughs, memories to the University of North Florida 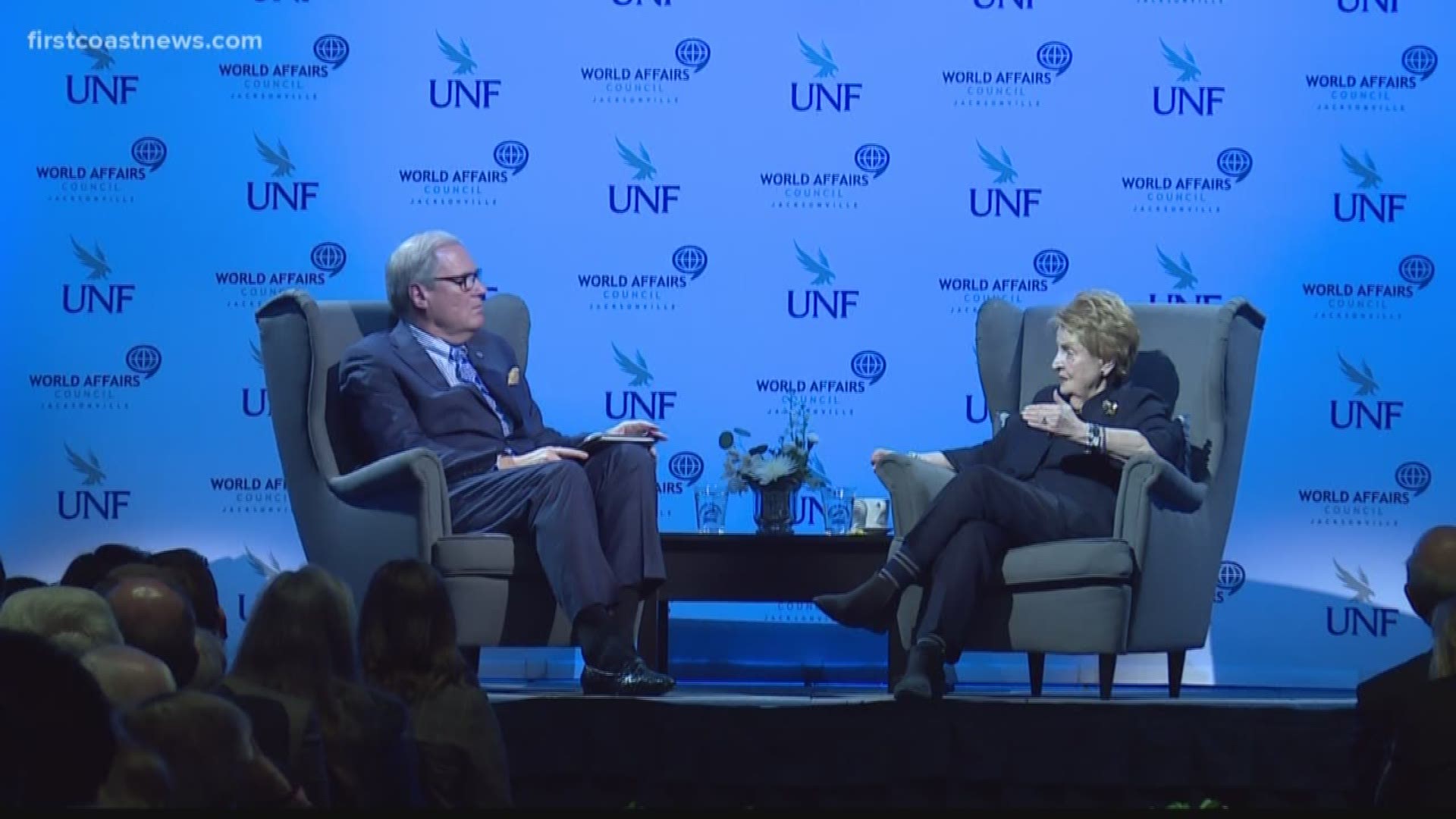 JACKSONVILLE, Fla. — Former U.S. Secretary of State Madeleine Albright paid a visit to the First Coast Wednesday, speaking at the University of North Florida in Jacksonville. Although she is about to release her sixth book, it was the title of her last book, “Fascism: A Warning,” that ironically led to one of the first laughs of the night.

The concept of Fascism, she explained, originated with Italian dictator Benito Mussolini, who led the National Fascist Party. Albright related that a fascist state rises in steps but not in secrecy.

“My best quote in the book,” she said, “is actually from Mussolini, that if you pluck a chicken one feather at a time, nobody notices.”

“And there’s a lot of feather plucking going on now,” she said of current front-page politics, then breaking the tension with “By the way, you can’t say those two words together too quickly!”

It was one of many laughs the former Secretary evoked from the audience of about 3,500 at the UNF Arena, drawing from her service in the Clinton White House, often cracking jokes about her interactions with a whos-who of world leaders, describing Palestinian leader Yasser Arafat as “an indomitable kisser” and sharing her thoughts about current Russian president Vladimir Putin.

“Definitely, Putin is very smart and nasty, mean," she said. "I’ve spent time with him and he’s a cold fish."

UNF President David Szymanski, who hosted the conversation, picked up the humor along with the audience.

“So you don’t have an opinion on him at all?” he asked with a sarcastic smile.

The 82-year-old Czechoslovakian-born Albright talked of her upbringing and migration to the United States, along with her rise to become the highest-ranking female government official in U.S. history when she became Secretary of State from 1993 to 1997.

She talked of current concerns to the United States.

“Russia is a threat to us in a variety of ways,” she offered as one example.

At no point, however, did Albright – who also served in the administration of Jimmy Carter, another Democrat – directly mention or critique Donald Trump’s presidency, the impeachment hearings that had just ended, or the Iowa Caucus two days before.

And that was just fine with some of her younger admirers.

“I believe that it’s more valuable for us to get her experience in foreign policy,” high school senior Adam DiMascio said after meeting Albright, “just because that was what her focus was in as Secretary of State.”

“The kids in the back room, when we were having the interaction, that’s what we wanted to hear,” Rowan said. “No one asked a single thing about domestic policy.”

Indeed this night would favor the lighter side of an insider’s experience in one of the nation’s most powerful positions and an assertion that the best foreign policy begins with future leaders.

“I think American students benefit by having foreign students come to the United States,” Albright reasoned. “That is the way you learn respect for other cultures.”