Clay County Sheriff Darryl Daniels vowed to put down any protests that aren’t peaceful with the full force of his office and with the help of gun-owning residents. 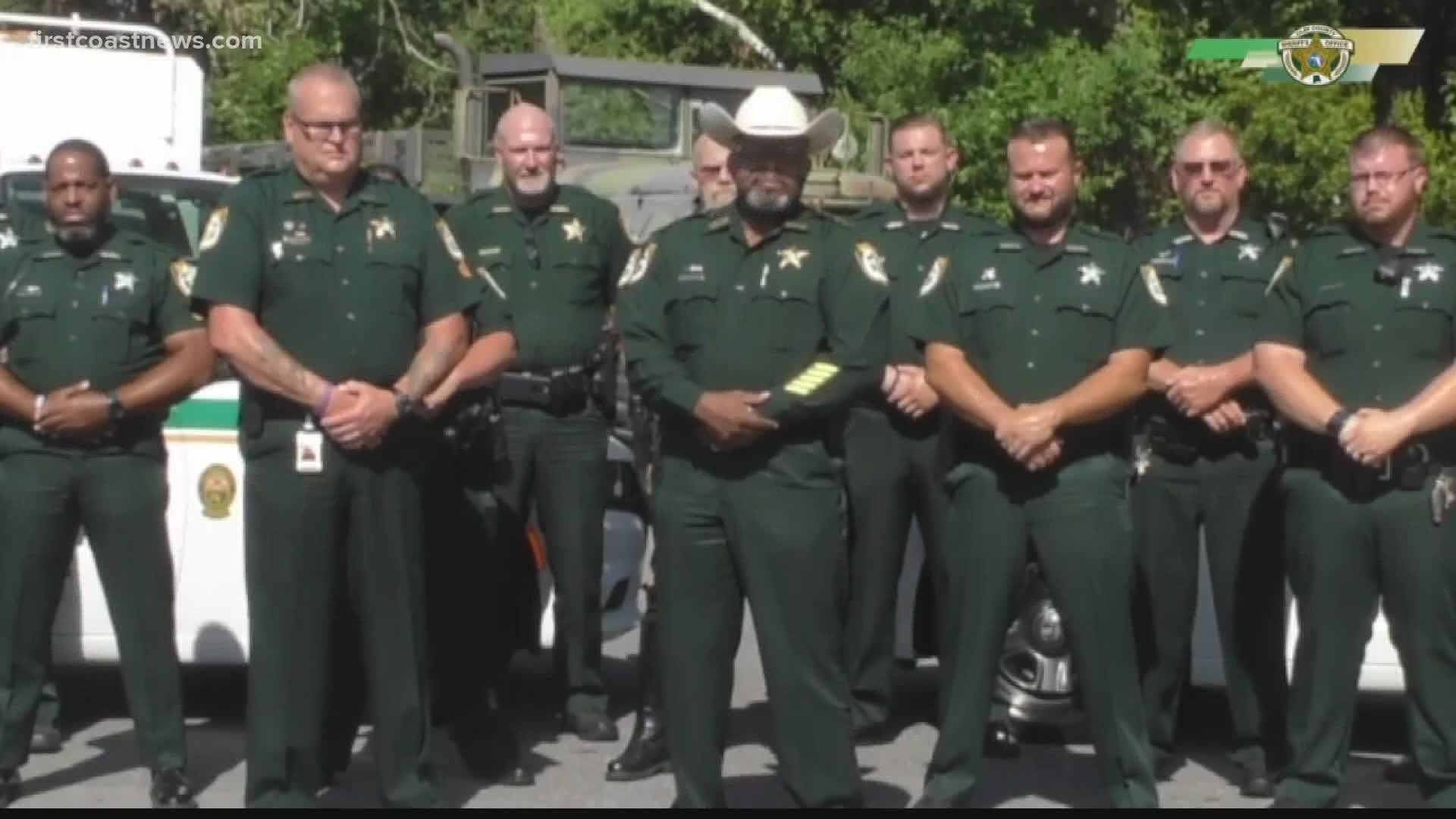 CLAY COUNTY, Fla. — Clay County Sheriff Darryl Daniels, no stranger to making viral videos appealing to tough-on-crime politics, released a video Tuesday that said he will make “special deputies of every lawful gun owner in this county” if he feels the county is overwhelmed by protesters.

The three-minute video shows Daniels standing in front of 18 deputies as he derides civil-rights protesters as godless disruptors and tells them to stay out of Clay County, a suburb of Jacksonville.

“And if you come to Clay County and you think for one second, we’ll bend our backs for you, you’re sadly mistaken,” he said. “I know what happens when lawlessness prevails. And in this day and time, God is raising up men and women just like the folks standing behind me who will have strong backbones and will stand in the gap between lawlessness and the citizenry we’re sworn to protect.”

Daniels, the county’s first black sheriff, is himself under investigation by the Florida Department of Law Enforcement related to an affair he had with a fellow officer back when he was at the Jacksonville Sheriff’s Office and a subsequent false arrest of that officer.

Daniels is a first-term sheriff up for re-election who has said he wants to one day be a congressman. He is being challenged by six opponents, including Atlantic Beach Police Chief Michelle Cook, former Clay Couny Sheriff’s Office Emergency Management Director Ben Carroll and Mike Taylor, a former FDLE agent and state attorney’s investigator who has earned the endorsement of former Gov. Jeb Bush.

Full comments from the video:

Don’t fall victim or play victim to this conversation that law enforcement is bad, that law enforcement is the enemy of the citizens that we’re sworn to protect and serve. We swore an oath, and in that oath, we swore to support, protect and defend the Constitution of the United States and the government, and that we’re duly qualified under the state’s constitution to hold office. That means for me as a sheriff and these men and women as deputy sheriffs. And we end that with, ‘So help me God,’ but God is absent from the media’s message or Black Lives Matter or any other group that’s making themselves a spectacle disrupting what we know to be our quality of life in this country.

In Clay County we have a great quality of life. We have a great relationship with our community. But across this nation, not so much.

I wanted to take a stand with these men and women who feel the same way as I do.

And if you come to Clay County and you think for one second, we’ll bend our backs for you, you’re sadly mistaken.

I know what happens when lawlessness prevails.

And in this day and time, God is raising up men and women just like the folks standing behind me who will have strong backbones and will stand in the gap between lawlessness and the citizenry we’re sworn to protect.

So, you can threaten all you want. You can say let’s go to Clay County or let’s go to some other peaceful county where problems don’t exist where relationships are great and not strained and where the people support their sheriff and support the men and women in uniform. And you’ll have something waiting you don’t want.

Yes, we’ll protect your constitutional rights as long as you remain under the umbrellas of peaceful protest or peaceful march.

But the second you step out from up under protection of the Constitution, we’ll be waiting on you and we’ll give you everything you want.

All the publicity all the pain all the glamour and glory for all that five minutes will give you.

Is it a threat? Absolutely not.

But someone has to step up in front of the camera and say enough is enough. Tearing up Clay County, that’s not going to be acceptable

If we can’t handle you, I’ll exercise the power and authority as the sheriff, and I’ll make special deputies of every lawful gun owner in this county and I’ll deputize them for this one purpose to stand in the gap between lawlessness and civility.