Florida Gov. Ron DeSantis announced Saturday that Florida K-12 schools will continue long-distance learning for the duration of the school year. He said the consul 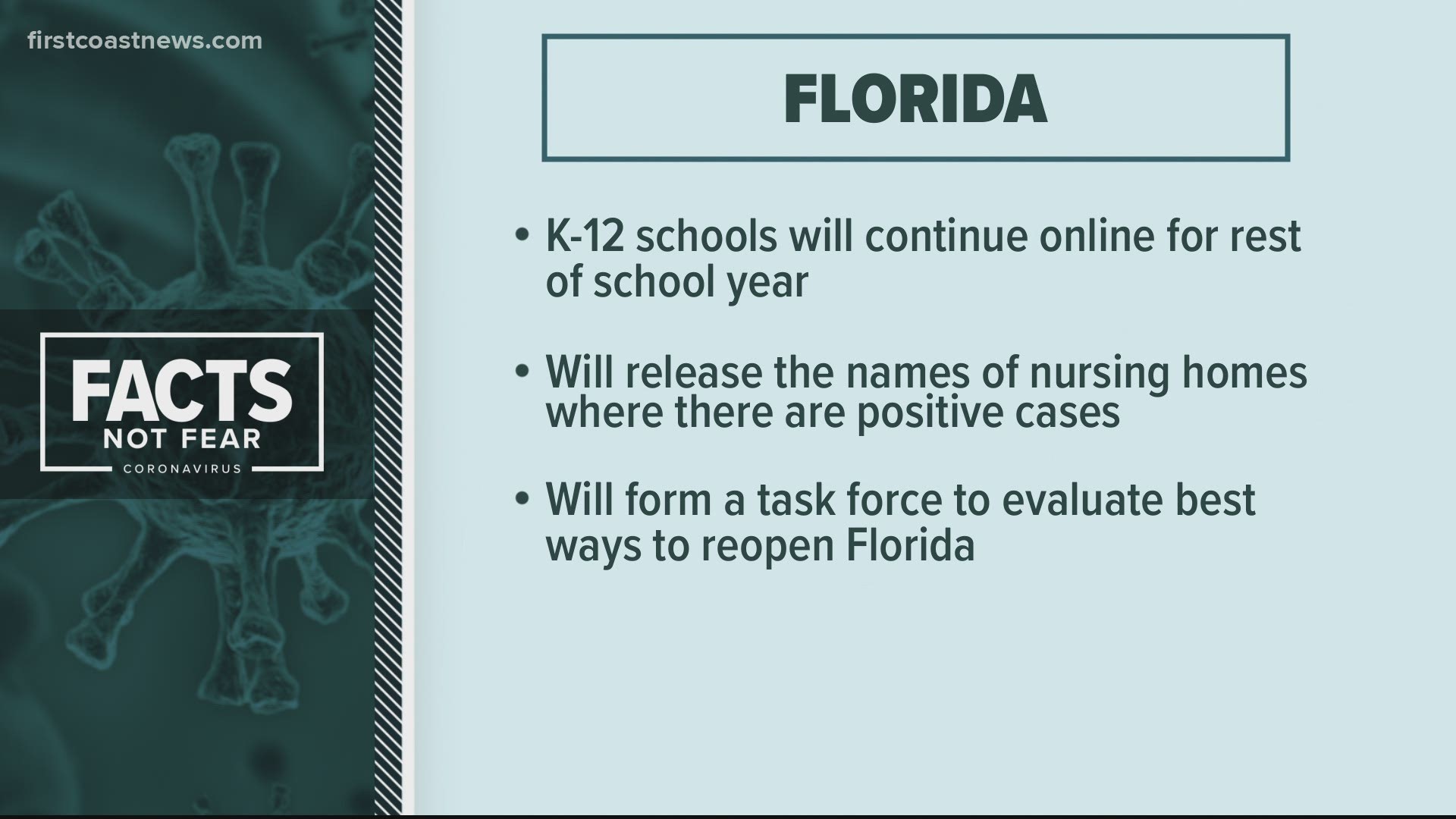 He said he consulted people across the state and received a variety of opinions, but he wanted to avoid rushing people back to school when about half of the parents may keep their children home and about half of the teachers may not feel safe going back yet.

“Some parents were not interested in their kids going back, for some others it's been tough around the house, they would have liked to have seen them go back," DeSantis said, "but I think as we looked at the clock and looked to see how it would look, we've got pretty good momentum for distance learning. It’s obviously not the ideal situation, but given where we are in the school year we felt that that was the best decision to go forward.”

DeSantis said it was an easier decision to make "knowing we've done so well with distance learning,” with other states following in our footsteps in that realm.

“I am sensitive to the fact that a lot of our kids haven’t seen friends for a while, so this has had a social cost to it and I want to figure out a way to overcome that," he said. "I think in the next phase kids will have a lot more to do.”

DeSantis also announced plans for further testing expansion. He thanked the Florida National Guard for being "instrumental" in starting and maintaining testing sites, as well as effectively working as "strike teams" to conduct spot testing in nursing home facilities. He said they will be working to expand those strike teams.

On Saturday he said they launched two new walk-up testing sites in Broward County communities where residents don't have easy access to cars. He said they plan to replicate and expand those sites into similar communities, one of which they already started in Jacksonville with the help of UF Health.

As of Saturday, he reported that statewide test results topped 250,000, which is comparable to approximately one out of every 87 to 88 residents, a statewide ratio that he said was actually higher than some southeastern Florida counties.

“If you look at the percent positive, that is the lowest 2% positive we’ve had in probably two or three weeks.”

He said, "those are good trends and good signs" they continue to track daily.

Going forward he said they are working on expanding and improving their relationship with commercial labs. Initially, the Center for Disease Control was solely taking care of COVID-19 testing, but when the process moved too slowly private labs started to get involved, namely Lab Corp and Quest.

While money seems to be one factor getting in the way, DeSantis said they are hoping to utilize more private lab companies and expedite quicker tests. "Rapid" tests are primarily in hospitals right now, but he said he would like to get out thousands of 24-hour tests so employers can send someone in to get tested and receive a result by the next day.

This week Stanford University released a new study after analyzing the number of people with antibodies from the coronavirus in Santa Clara, California. According to the study, they found that between 50-80 times more people in the county had the antibodies for the coronavirus than those who had tested positive.

“We think that’s important information and we want to see that in Florida. We’re working with a company that does blood donations and they’re going to screen the blood for these coronavirus antibodies," DeSantis said. "We also have a number of these antibody test kits. They’re supposed to be coming in this week, but as we’ve seen in this process you never really know how that’s all going to work out.”

He said they will use those antibody results strategically, as it will be important to know if the number of people who have actually tested positive is a really small portion of the people who have had the coronavirus. They believe this information will greatly impact policy-making going forward.

Starting on Monday the members of his "rebound and resurgence” task force will be announced. They will also meet that day for the first time by phone and discuss plans for a "three-phase process", for the short term, the medium term and the long term recovery of the state.

He said the team will meet by phone daily throughout the week and send him their three-phase plan by the end of the week.

The members are made up of a variety of people from across different industries in the state. DeSantis said he asked mostly small business owners to help with the plan, as well as county mayors from southeast Florida and other business owners and officials through the state so they can all bring different experiences to the table.

He said while they will still not be identifying individuals by name who test positive for COVID-19, he has instructed the surgeon general to release as much information as possible when positive cases arise. On Saturday he announced they will now also be releasing the names of the facilities where they confirm cases.

DeSantis said that even when everyone is properly following their guidelines in long term facilities, it only takes one staff member who has no symptoms to unknowingly spread it like wildfire. He said that's what the strike teams are working to prevent.

In terms of travel, he said they have now screened nearly 22,000 people coming into the state either from the New York City area or New Orleans. They are still required to self-isolate for 14 days.

Additionally, DeSantis said they are considering expanding the state labs. They currently have state labs in Jacksonville, Tampa and Miami, but we they are thinking of adding a fourth state lab inland in case an event like a hurricane jeopardizes the coastlines.

People can continue receiving updates by texting FLCOVID19 to 888-777.

RELATED: When will Georgia reopen? Gov. Kemp discusses what needs to happen next