For weeks, the entire underground gas line infrastructure for Eureka Gardens has been in the process of being replaced, leaving nearly 800 people without gas.

JACKSONVILLE, Florida — For years, First Coast News covered the nearly unlivable conditions at the former Eureka Gardens apartment complex on Jacksonville's Westside. Lawmakers and local leaders have made their concerns known for the families there.

It’s since been re-named Valencia Way. The complex still receives federal funding through the Department of Housing and Urban Development [HUD].

It uses HUD's voucher program, which is a housing subsidy paid to landlords directly on behalf of low-income families, the elderly and disabled residents.

For the last three weeks, the entire underground gas line infrastructure for the complex has been in the process of being replaced, because of that, nearly 800 people in the complex are left without gas, meaning no hot water or heat.

It's expected to last for at least another three weeks to a month, according to residents.

During that time, families have to use portable bathrooms and showers set up in the apartment's parking lots.

Imagine using a portable, group shower in the parking lot of your apartment complex?

Valencia Way residents, like Michelle Clark, fear their living conditions there will not improve any time soon.

"I think it’s worse now, especially for the children," Clark said. "To have to take a bath in the cold water and then go to school, it’s just awful."

As the complex teems with young kids at play, parents tell us they are worried.

"They say six weeks but I think it’s going to be longer than that," she said.

Representative Al Lawson is the latest lawmaker to come out and demand action from HUD.

According to his office, Lawson asked HUD to intervene to ensure that residents, who want it, are provided with temporary housing and transportation until the gas is restored to Valencia Way.

“My concern is that the residents of Valencia Way, who are still paying their full rent, are treated with the utmost dignity and respect during this difficult time,” Rep. Lawson said. “They, like most Americans, want a clean, affordable and safe place to call home. Sadly, the current conditions the residents are forced to live with do not meet that mark.”

First Coast News reached out to managers on the property Wednesday but were told to send all of our questions to the company’s media representative, who says they are working to address the concerns we raised by the families.

As they address those questions, they sent the following statement:

"We are working with our valued vendors and suppliers to restore natural gas service to the Valencia Way community as quickly and safely as possible.

After decades of gradual deterioration, the entire underground infrastructure is being replaced; during this time, we are focused on providing resources to residents to minimize inconvenience, including daily meal service, cooking appliances, secure temporary showers and fully functional laundry facilities.

We understand this is a difficult time for our residents, and that is why we are working diligently to restore service to the buildings on a rolling basis; as work is completed for each phase, service will be restored, expediting the process."

Lawson is demanding HUD offer families temporary housing and transportation until the gas is restored.

He is expected to visit Valencia Way in person in the coming weeks.

His full letter to HUD can be viewed below: 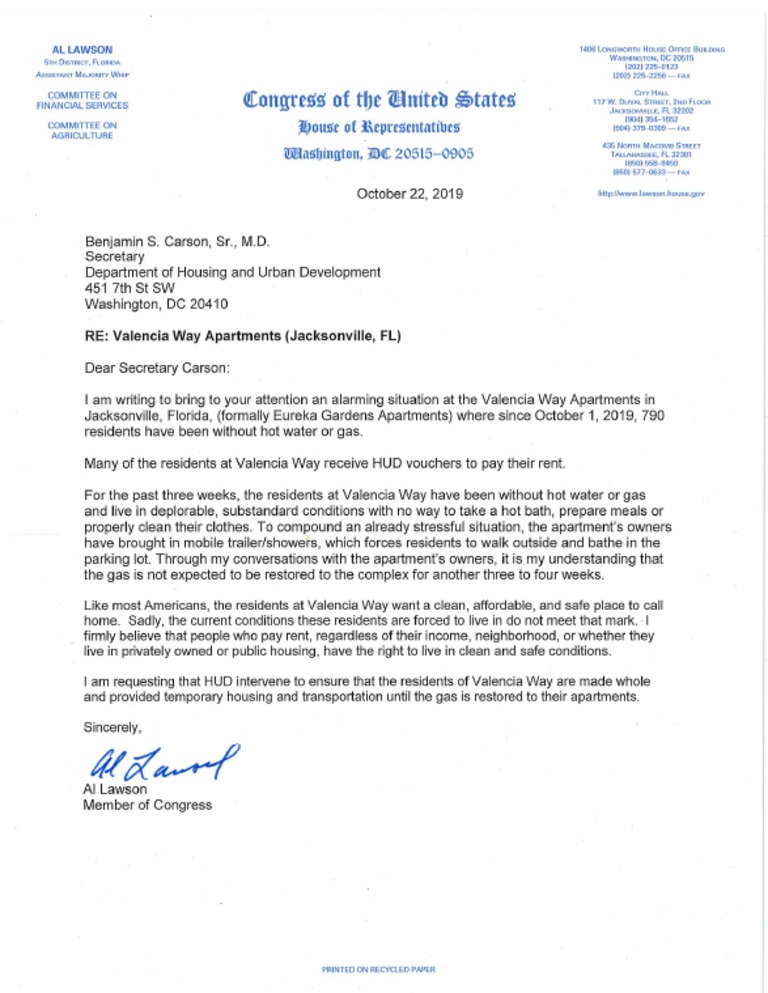 Letter to HUD
Representative Al Lawson send a letter to HUD regarding the conditions of Valencia Way, formerly known as Eureka Gardens.