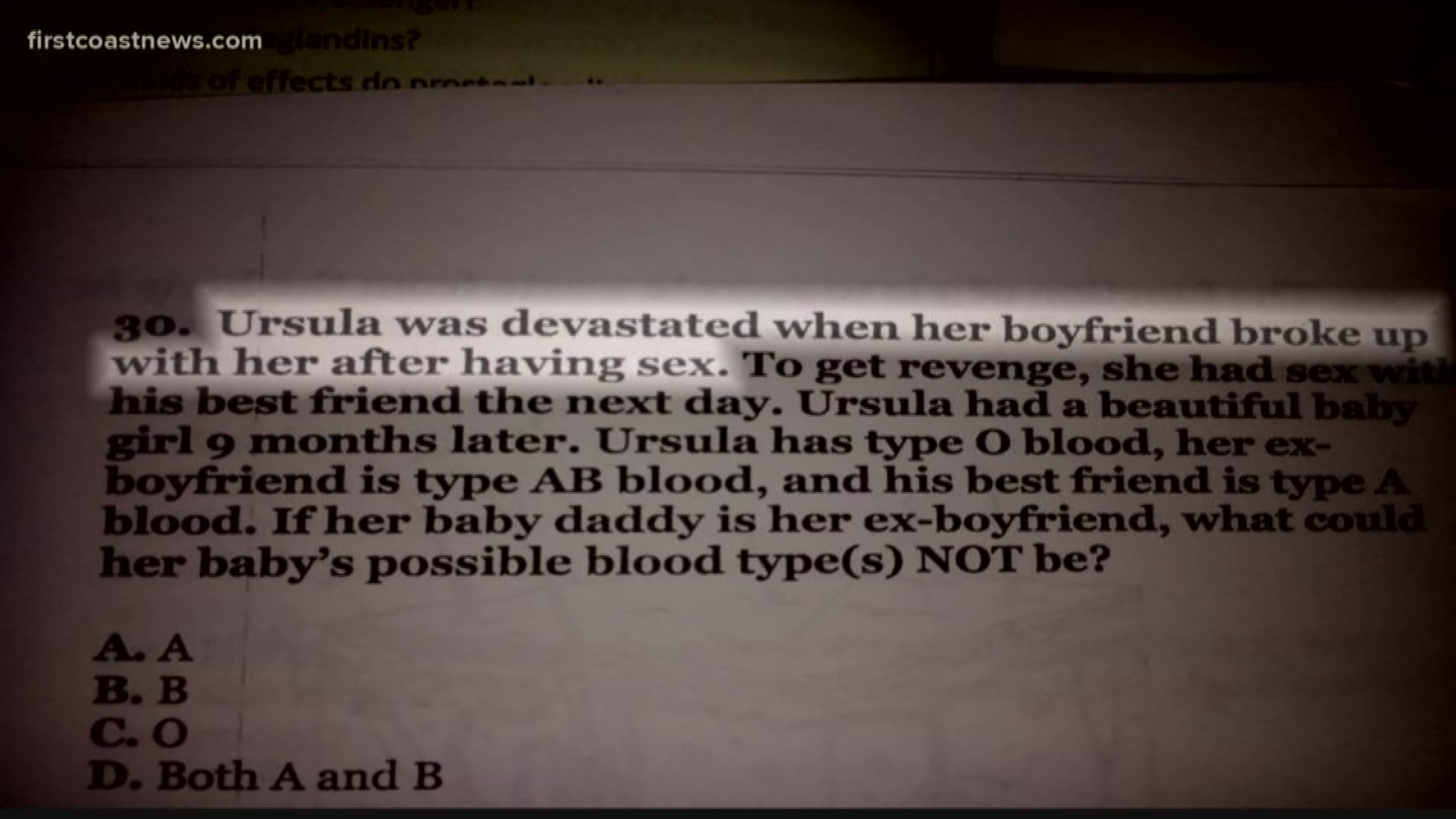 JACKSONVILLE, Fla. - A Jacksonville father is demanding answers after he found an inappropriate question in his daughter’s homework assignment.

Omar Austin told First Coast News that when his daughter, an eleventh grader at Westside High School, first read him the question, he thought it was a joke.

“Those type of questions should be left for reality TV and soap operas, not an eleventh grader’s anatomy class,” Austin said.

“Ursula was devastated when her boyfriend broke up with her after having sex. To get revenge, she had sex with his best friend the next day. Ursula had a beautiful baby girl 9 months later. Ursula has type O blood, her ex-boyfriend is type AB blood, and his best friend is type A blood. If her baby daddy is her ex-boyfriend, what could her baby’s possible blood type(s) NOT be?”

Austin was appalled at the lack of morality of the question.

“The words ‘baby daddy’ and ‘baby mama’ being used, that’s foresight,” Austin said. “The fact that she’s having sex with one guy and to get revenge on this guy she has sex with his best friend the next day? I mean, that’s just not something that I want to teach any student.”

Yet Austin didn’t blame the school. Instead, he wanted answers from the school district, in part because of what he said the principal told him Thursday morning.

“This was a district-generated worksheet that her teacher just printed offline and it was given to the students,” Austin said. “I want it to be acknowledged. I want it to be reviewed. And I want it to be changed. I think that we can do better.”

"The question was highly inappropriate and was not part of a district assessment. We are thankful to the parent who contacted the school directly to share his concerns. Immediately upon being made aware of this matter, school and district leaders began conducting a review of the situation. Appropriate and corrective action will be taken. We encourage parents to contact their school leaders directly if they ever have any concerns about their child’s school and instructional experience so that we can immediately work to problem-solve."

When asked if the assignment was distributed to any other schools, a Duval County Schools spokesperson responded, "not to my knowledge."

DCPS school board member Scott Shine called the question text an outrage but said he is waiting on confirmation of the worksheet's legitimacy.

"We have to confirm, did someone put this in here as a sabotage? Is this a mistake?" Shine said.