Polk County Sheriff Grady Judd says the trafficking of drugs was masterminded by a man behind bars. 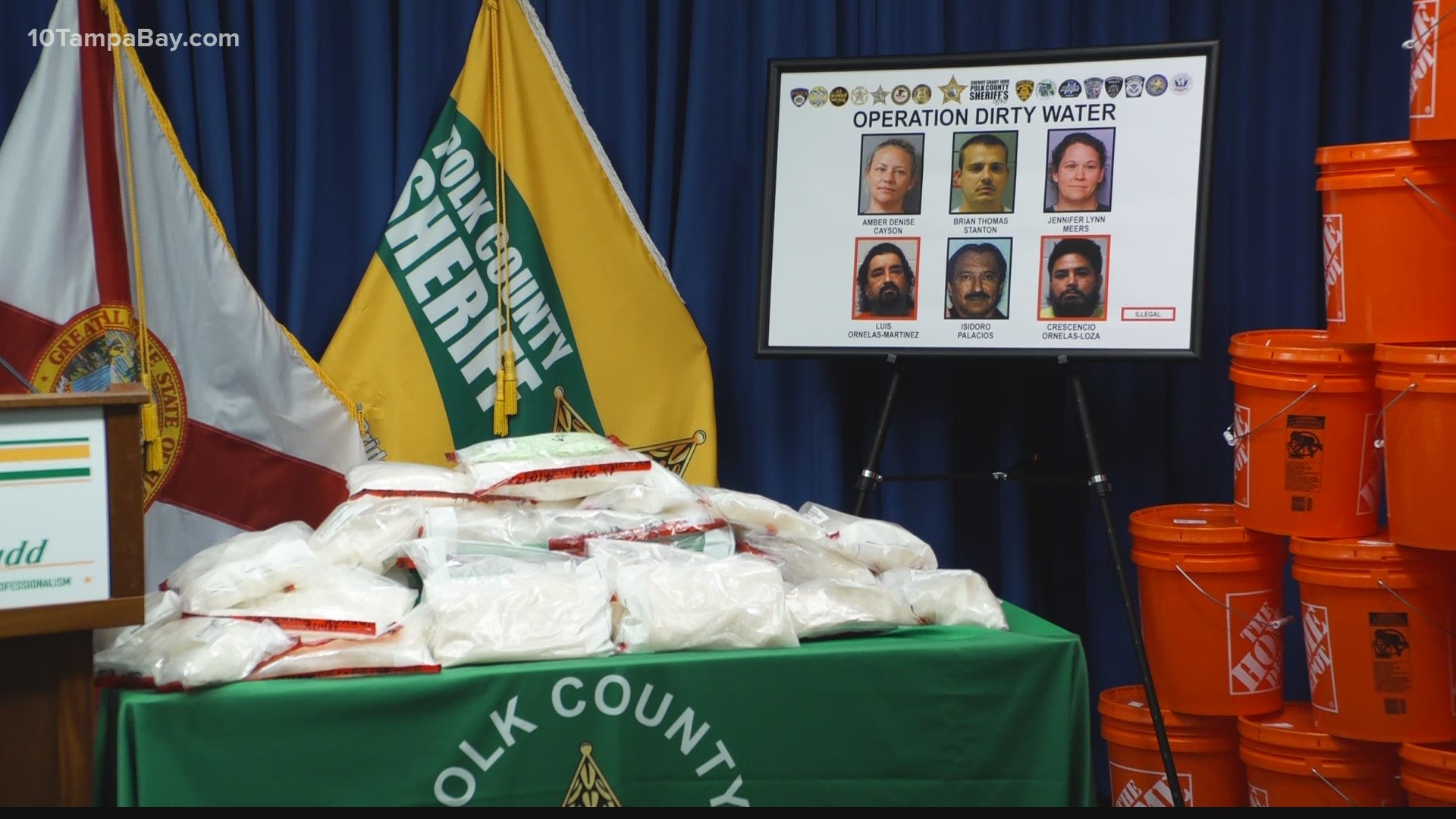 POLK COUNTY, Fla. — It all started with the interception of an envelope filled with Xanax pills and ended with the seizure of the largest volume of methamphetamine in the history of the Polk County Sheriff's Office.

But it does not stop there. Detectives involved in the investigation also uncovered during "Operation Dirty Water" that the drugs they seized and 6 people they charged had ties to the Juárez Cartel.

“One of the cartels is not very happy today because their folks got caught with a whole lotta drugs," Sheriff Grady Judd said.

To catch you up to speed, Judd says we'll have to start in January when an envelope shipped from Canada containing 2,544 Xanax pills was intercepted.

The sheriff's office says it was headed to 37-year-old Amber Cayson of Winter Haven. Instead of it being delivered by mail, undercover deputies instead paid her a visit for controlled delivery of the drug.

She was arrested and the investigation pushed forward. This time, leading investigators to the United States Federal Penitentiary in Atlanta where 37-year-old Brian Staton, known as "Lil B" was being held.

According to the sheriff's office, he was the mastermind behind arranging the sale and delivery of 26 pounds of meth in Polk County. Undercover detectives then met with Jennifer Meers, 43, who they say delivered a suitcase full of 12 clear storage bags containing the illegal drug at a hotel room in Lakeland.

Meers is said to have just been released from prison after serving a 10-year sentence for drug trafficking and is currently on federal probation.

A second undercover drug exchange was set up, but this time in Georgia. Deputies say Meers left 35 pounds of meth in her truck across the street from the landscaping company she worked for.

The drugs were secured and Meers was later arrested during a traffic stop where authorities say she admitted to being paid $500 a kilo by Stanton for deliveries.

Information uncovered during her arrest also led investigators to the location of methamphetamine conversion labs, additional arrests, the discovery of more than a dozen firearms, and the seizure of 1,416 pounds of crystalized and liquid meth.

It also uncovered an illegal cockfighting ring run by Isidoro Palacios, 59, who was arrested, according to the sheriff's office.

“This is not a horrible fairy tale. It’s the truth," Judd said.

In total, the sheriff's office says more than $54 million worth of illegal drugs were seized across the entire operation. Judd added that not all of the drugs were destined for our area, but that members of the Juarez and Sinaloa drug cartels had expressed interest in setting up a central Florida hub for distribution.

“We arrested the people. They were willing to send it here,” he said. “They wanted to establish a conduit into the county and our undercover detectives were their new operation in Central Florida. Surprise, we’re the cops!”

“Some people still call this low-level, non-violent drugs. These drug dealers have blood on their hands. They make money off the misery of others. They use violence as a means to enforce their trafficking business. We seized 20 firearms during this investigation, including rifles, shotguns, handguns, and three stolen guns. Methamphetamine destroys lives, degrades communities, and ruins families. Through our partnership with Homeland Security and law enforcement agencies in Florida and Georgia, our detectives took a huge amount of meth off the street and shut down an active drug trafficker operating out of a federal prison.”

You can watch the full press conference below.