The land planned for The District sits behind a chain-link fence. The only thing rising from the ground is a few shade trees. 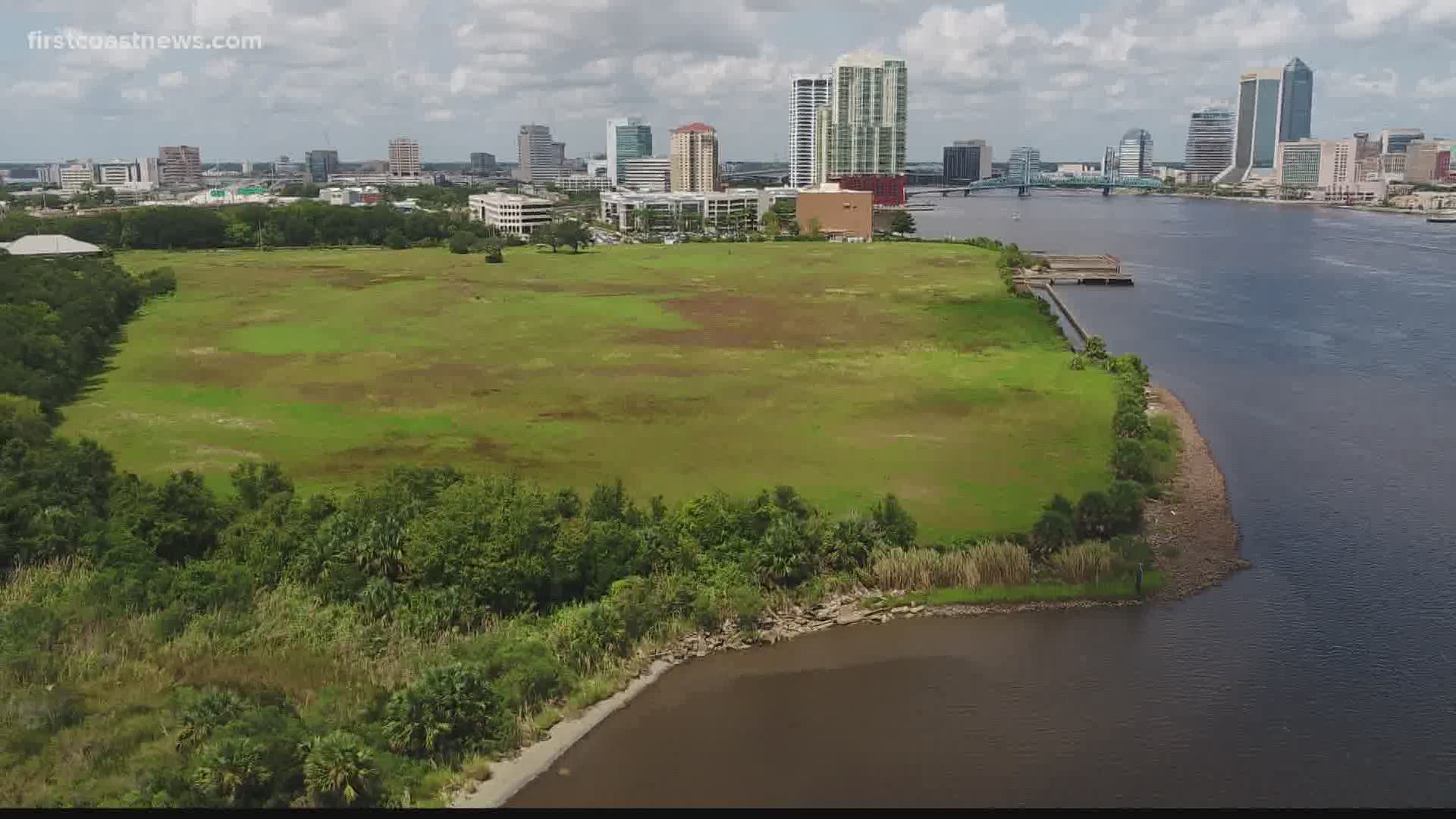 JACKSONVILLE, Fla — Where the St. Johns River flows through downtown Jacksonville, the barren land known as The Shipyards on the Northbank and the grass-covered tract called The District on the Southbank face each other in mirror images of proposed mega-developments that have yet to break ground after years of trying.

In June, the clock ran out on Jaguars owner Shad Khan's right to negotiate a redevelopment agreement for The Shipyards and Metropolitan Park, the long swath of Northbank riverfront where Khan's plan in 2017 called for condominiums, apartments, hotels, stores, restaurants and marina docks along 70 acres.

Time is running down as well for The District on the Southbank.

This month, Downtown Investment Authority CEO Lori Boyer put The District's developers on notice they need to get moving on the next phase of their project that would build apartments, a hotel, stores, restaurants and offices along with a new riverfront park on 32 acres that used to be the site of a JEA electric generating station.

Six years have passed since a team led by Peter Rummell, a former Disney and St. Joe Co. executive, submitted the winning bid to JEA for the site. It's been two years since City Council approved an ambitious redevelopment deal in June 2018 for up to $56 million in property tax rebates and as much as $26.4 million for public improvements including a new riverfront park and riverwalk extension.

The land planned for The District sits behind a chain-link fence. The only thing rising from the ground is a few shade trees.

Bigger might be better, but the city's experience with The Shipyards and The District has shown it's also harder to turn those high-gloss visions into reality.

"They will be catalytic when they come online, but they just seem more fraught with challenges, and part of that is they probably have more hurdles to overcome," Boyer said. "But they are a huge opportunity for us."

Boyer sent a letter last Friday to Elements Development of Jacksonville, the developer behind The District, informing Elements that closing on bonds to finance construction of streets, drainage and utilities must happen by the end of September unless Elements can justify more time for achieving that milestone.

The original deadline for issuance of the bonds was Jan. 13, but the Downtown Investment Authority extended it at Elements' request. Boyer said if Elements of Jacksonville cannot issue the bonds by the end of September or make a case for why it should get more time, the redevelopment incentives approved by the city in 2018 will expire.

"When we approved this project, it was such an exciting time," council member Joyce Morgan said. "It was very controversial, of course, because of the nature of the size and what was going on with that property. I know we all got such assurances about how this was going to proceed and what they were going to do and how everything was going to fall into place."

Council member Ron Salem said he gets more questions about The District than anything else in the city.

"It's the fact that nothing has started," he said. "That's the major question — when is something going to start at The District?"

So far, the city has not spent any taxpayer dollars on The District or on Khan's redevelopment plan for The Shipyards and Met Park. In the case of Khan's proposal, he and the city never completed negotiations for a redevelopment agreement spelling out their financial obligations.

But the city has committed $14 million toward on an ongoing $39 million project that demolished a portion of the Hart Bridge ramps connecting the bridge to downtown. The ramp removal will open up that area between Met Park and the sports complex's Lot J, which Khan wants to turn into an "urban village."

State and federal transportation dollars are paying for the rest of the cost for the project. Whether drivers will see any signs of construction from Khan's proposed developments by the time that roadwork is done is unclear.

Officials expect Khan to resubmit a plan that still includes a luxury hotel but could be scaled down from his original plan.

A spokesman for Khan didn’t specifically say what would stay or go in the proposal, although he said some of the components originally planned for the “westerly portion” of the Shipyards development would be shifted to Lot J.

Khan won the three-way competition for the Shipyards and Met Park in 2017 with a plan he said would usher in the “rebirth” of downtown. The proposed development would attract more than $500 million in private investment to build up to 1,000 apartments and condominiums, a luxury hotel, a marina and hundreds of thousands of square feet of office space, retail shops and restaurants, according to the proposal.

In 2018, Khan said he intended to build a separate large-scale development at Lot J, the parking lot next to the stadium that was the site of heavy industry in its former life.

Khan said the Lot J development would include hotels, restaurants, office space and an outdoor entertainment venue. Combined with the Shipyards and Metropolitan Park development, Khan said it would be part of a $2.5 billion urban village that he planned to build near the stadium.

Mayor Lenny Curry announced last August that the two parties had agreed to terms on a development deal for Lot J. The deal included the Jaguars investing more than $700 million into the project, and the city paying $208.3 million in hard money and providing an additional $25 million in economic incentives.

The tentative terms have not crystallized into a written deal, however, for Lot J.

While the COVID-19 pandemic disrupted business and darkened the short-term outlook for the economy, the city’s deadline to strike a deal with Khan over the Shipyards and Met Park property expired on June 30. DIA officials said they don’t have a timeline for rebidding the property and selecting a new developer.

It’s still unknown how the city will clear regulatory hurdles that are preventing any private development on Met Park, which the city agreed in the 1980s to preserve as a park in “perpetuity” in exchange for receiving federal grants to purchase the land. In order to allow Khan to build on the land, the city would have to create a new park to replace it and get approval from state and federal officials.

Compared to Khan's plan, work on The District is farther along in the development process and has actually had private investment dollars paid into the project. Elements Development of Jacksonville bought the property from JEA for $18.6 million in July 2018.

City Council required Elements to purchase the land as part of its agreement to provide incentives for the $280 million development of 950 residences, 147 hotel rooms, 134,000 square feet of retail space, 200,000 square feet of office space and a 125-slip marina.

Meanwhile, the city established The District Community Development District in October 2018, creating a quasi-governmental entity that would separately handle financing for $32 million of infrastructure work. Community development districts raise money through assessments on property owners within a district's boundaries.

But when the deadline arrived in January for the community development district to close on selling the bonds, Elements Development got a 90-day extension from the Downtown Investment Authority until April 13.

When the COVID-19 pandemic hit, the DIA agreed to a "force majeure" suspenstion of deadlines, leaving 30 days of unused time on that extension.

In the letter sent last Friday to Elements Development, Boyer said the situation is different now than it was in March. "Business activity has resumed and schools are opening, and concerns over market stability are not a basis for the use of this provision," Boyer wrote.

She said she would resume the clock on Sept. 1 for the remaining 30 days of the extension unless Elements provides "documented evidence" that the pandemic is preventing closing on the bonds and other next steps.

The development agreement allows Boyer to grant an additional 90-day extension, but she said that would depend on Elements being able to show something would change over that time period making it possible to move forward.

Michael Munz, who is a partner with Rummell in Elements Development, said Elements is working with its team to prepare a response to Boyer's letter. Munz said Elements has put up millions of dollars getting the project through extensive permitting and engineering reviews for the project on a Brownfields site.

"No one has tackled a 30-acre mixed-use Brownfields site in downtown Jacksonville and gotten this far," he said. "It's been a very complicated and detailed project."

He said money spent by Elements on the design and permitting work will be reimbursed from bonds issued by the The District Community Development District. "Nobody has more of an interest in this project moving forward for a lot of reasons," he said.

Boyer said if the city terminates the development agreement, Elements would remain the owner of the land but would be unable to move forward without financial incentives from the city. That would put the entire site back to square one, she said.